The two simultaneous developments in school enrollment described above—rapid increases in the number of Hispanic students and the decline in the number of white students—potentially constituted a significant shift in the racial and ethnic composition of American public schools. Using various approaches, researchers have come to fundamentally different conclusions about how the population change was reflected in the actual racial/ethnic makeup of schools. Gary Orfield, co-director of the Harvard Civil Rights Project, concluded that segregation intensified over the 1990s (Orfield, 2001). John R. Logan, a sociologist at Brown University, observed that the trend toward lower levels of school segregation, evident since the late 1960s, halted in 1990 but did not reverse (Logan, 2004).

This analysis finds that the combination of changes in enrollment and the opening of new schools had some notable effects on racial composition when examined in terms of the kinds of schools attended by white students. However, after a decade of change, one fundamental characteristic essentially remained: A substantial majority of white students attended schools populated primarily by other whites, and relatively few attended schools populated primarily by minorities. This analysis is not meant to resolve the debate over the trend in segregation; rather, it offers another perspective on changes in enrollment composition, examining trends in terms of two variables: the growth of the Hispanic population and the opening of new schools.

Some change in racial/ethnic distribution was inevitable simply as a result of the change in the student population. From 1993-94 to 2002-03, the number of white students declined slightly (35,000) while the number of Hispanics and other minorities increased by nearly 4.8 million. As a result, the white share of total enrollment decreased from 66% to 59%.

This analysis uses three common measures of racial distribution. One is the share of white students who attend schools that are predominantly white, defined here as having white enrollment of at least 90%. Another measure is the share of white students attending schools that are largely white, defined here as those with enrollments that are 50% to 90% white. Finally, racial composition can also be measured in terms of minority/majority schools, where minority students constitute a majority of the student body. Examining those measures on a national or regional basis offers a generalized look at broad trends, and it is important to keep in mind that racial/ethnic composition can vary significantly among schools within a single community. Much of the empirical literature on trends in school segregation examines school enrollment at the school district or metropolitan area level. Trends at the state or regional level don’t necessarily apply to smaller areas. Again, the purpose of this report is not to weigh in on the debate on school segregation trends but to understand how enrollment patterns in new schools compare to the distribution of enrollment in existing schools. 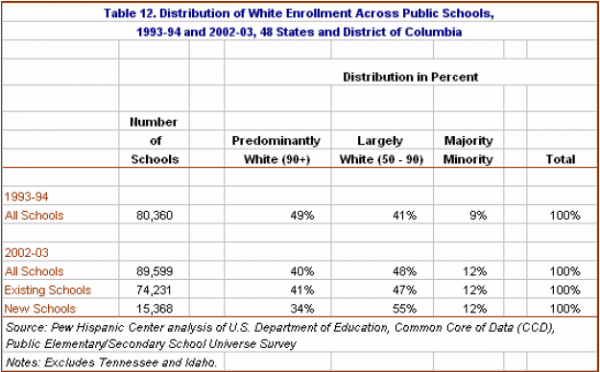 Although minorities, particularly Hispanics, accounted for all of the enrollment growth in this period, the same basic pattern held for the new schools. In the new schools, a smaller, though still substantial, share of whites attended predominantly white schools. Of white students in new schools, 55% attended schools that were largely white, compared with 47% of those in existing schools. There was no difference in the share of whites enrolled in majority/minority schools (12%).

This basic trend held true in areas of the country that experienced the largest shifts in enrollment measured in absolute numbers. In the six traditional Hispanic states, whites constituted 52% of all school enrollment in 1993-94; by 2002-03, their share had fallen to 44%. White students, in effect, became the minority, but relatively few attended schools that reflected that demographic change. In those states, 21% of whites attended predominantly white schools in 2002-03 and 57% attended largely white schools. Thus, 78% of white students attended schools that were disproportionately white. The share was even somewhat higher—80%—in the new schools in those states. 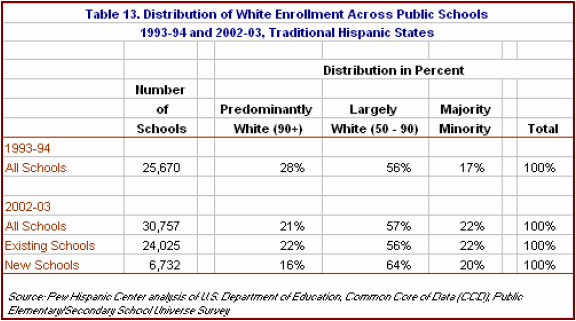 Primary schools are another category of schools that experienced substantial changes in their racial/ethnic composition. In the nation’s primary schools, whites constituted 64% of all students in 1993-94 and 56% in 2002-03. As noted above, Hispanic enrollment in primary schools increased by 1.6 million while white enrollment dropped by 1.2 million. The share of whites attending predominantly white schools dropped from 50% to 40%, but the share attending majority/minority schools increased only from 9% to 13% and was even lower (11%) in new schools. Again, most of the demographic change was absorbed in largely white schools. 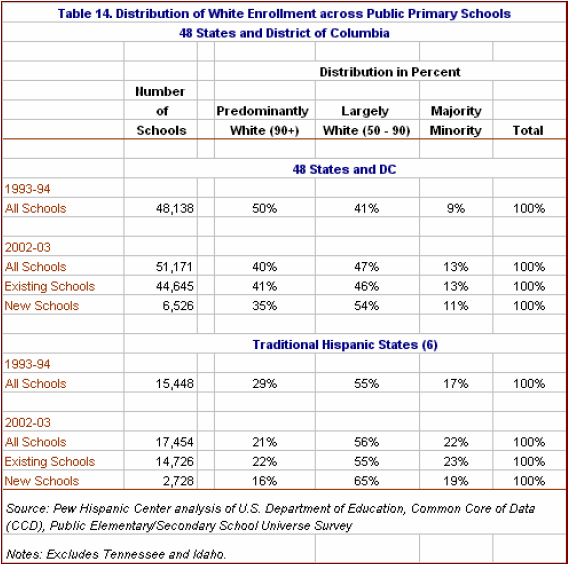 Next: VIII. The Impact of Hispanics on Schools
← Prev Page
Page2Page3Page4Page5Page6You are reading page7Page8Page9Page10Page11Page12
Next Page →