While ancillary to the primary purpose of the report, the Common Core of Data provides further information on the characteristics of new and existing public schools. Table 8 shows that new and existing schools in 2002-03 differed according to some key characteristics.1 On average, new schools tended to have lower enrollments. For example, in the 48 states and the District of Columbia the typical existing school had a total enrollment of 545 students, compared with 396 students at the typical new school. By several measures, new schools tended to have much more affluent student bodies than existing schools. Under the federal Elementary and Secondary Education Act, Title I funds tend to go to schools with higher concentrations of students from poor families. While 60% of existing schools were eligible for Title I funds, only 39% of new schools met the criteria. Under the National School Lunch Act, a student’s household income must be under 130% of the federal poverty level to qualify. In existing schools, 34% of students qualified for free lunches, compared with 30% of students at new schools. 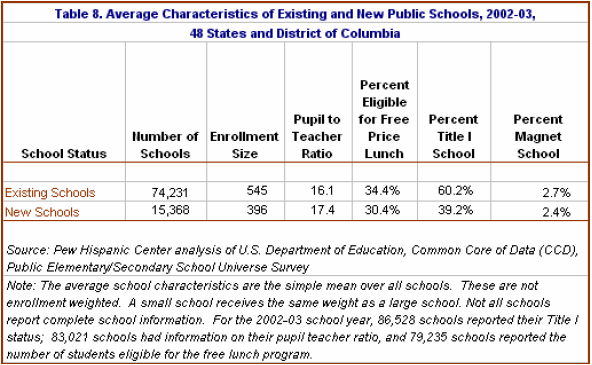