The pro-immigrant marches were a response to the debate over immigration reform in Washington, which has produced two legislative proposals. The first, approved by the House of Representatives in December, would mandate construction of a 700-mile fence along the U.S.-Mexico border, require employers to verify the Social Security numbers of all employees, increase fines against those who employ undocumented workers, and make it a felony to enter the country illegally. In addition, the legislation would make it a felony to assist anyone who enters or attempts to enter the country illegally or remain in the country illegally.

The bill passed by the Senate in May would mandate construction of a 370-mile fence along the border, require employers to use an electronic system to verify that new hires are legal and increase fines against employers who hire illegal workers. It also would set different requirements for illegal immigrants: Those who have been in the country for five years or longer would be allowed to remain and eventually become legal residents as long as they met certain requirements; those who have been in the country for two to five years would be required to go to a point of entry at the border and file an application to return; and those who have been in the country for less than two years would be forced to leave. The proposal also would create a guest worker program for an estimated 1.5 million immigrant farm workers who could earn legal permanent residency, and it would provide 200,000 new temporary guest worker visas a year.

Latino views on immigrants and on the major policy options have generally remained consistent over several years. In the current survey, most Latinos (72%) said illegal immigrants help the economy by providing low-cost labor, while a minority (21%) says they hurt by driving down wages. Majorities favor a temporary worker program for all undocumented immigrants. But like the rest of the American public, though to a lesser extent, there are divisions among Latinos on immigration and the policy options. For example, a significant minority (41%) said only undocumented immigrants who have been in the country for at least five years should be permitted to stay. Unlike the general public, however, only a small fraction of Latinos (5%) said that no undocumented immigrants should get a chance to stay and become citizens.

In four previous surveys, the Center has probed Hispanic views on the economic impact of illegal immigration, and the results have been highly consistent. In this survey again about seven of 10 Latinos said that illegal immigrants help the economy by providing low-cost labor, while a significant minority of nearly a quarter (21%) said that they hurt the economy by driving wages down.

Nativity has repeatedly proved to be the major dividing line on this topic, with nearly twice as many native-born Latinos (28%) seeing economic harm from illegal immigration. Among national origins groups, much smaller majorities of Puerto Ricans (57%) and Cubans (50%) take a positive view of the economic impact of illegal migration than among Mexicans (78%) or Central and South Americans (71%). All Puerto Ricans are U.S. citizens by birth and virtually all Cubans are either U.S. citizens or legal immigrants. Both Puerto Ricans (35%) and Cubans (39%) are more than twice as likely as Latinos of Mexican origins (16%) to say that illegal immigrants hurt the economy. 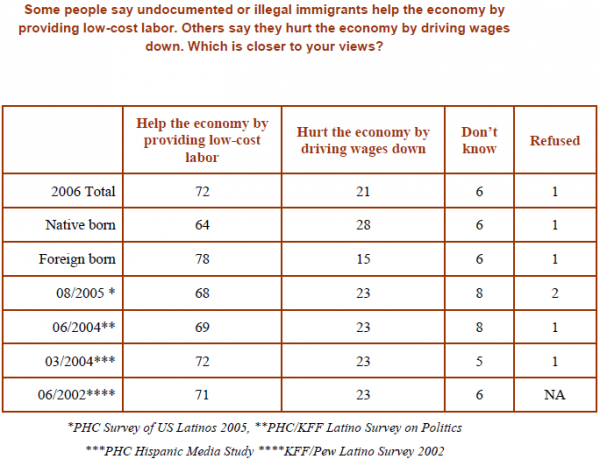 Views on the flow of legal immigration from Latin American are highly consistent. In 2002, for example, and again in this survey, nearly half (48%) of Latinos favor increasing the number of legal immigrants from Latin America, nearly a third (32%) favor keeping the same number and a slightly more than one in 10 favor reducing the number. On this point, Puerto Ricans differ significantly, with only 28% favoring an increased flow, 40% favoring no change and 23% favoring a reduction. Republicans and Democrats take similar views. The native born are somewhat less supportive of increased flows although the difference with the foreign born is not statistically significant. 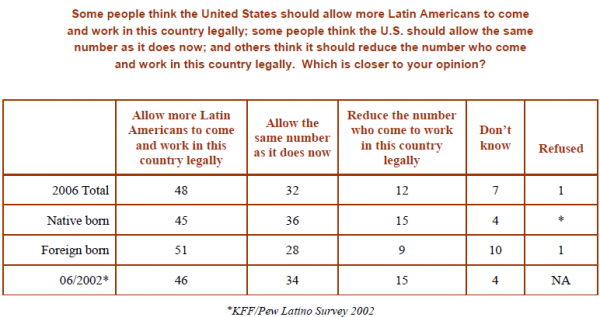 On these policy issues, there are significant differences between native-born Latinos, who tend to favor some restrictions and limits on immigration, and Latino immigrants, who generally express overwhelming support for increased immigration and in particular for undocumented immigrants. For example, a majority of native-born Hispanics (53%) supports adding border patrol agents, while a slightly larger majority (59%) of foreign-born Hispanics opposes an increase in enforcement.

There were also stark differences on whether the government should create a data base of all legal workers and require employers to verify employees. While a majority of Latinos (55%) overall support a database, among foreign-born Latinos the support fell to 42%. By comparison, 70% of all native-born Latinos favor a data base. A similar deep divide exists among Mexicans. Among foreign-born Mexicans, a little more than a third (38%) support a data base while almost threequarters (72%) of Mexicans born in the United States approve of one.

There are similar divisions over what should be done with illegal immigrants already residing in the country. Among foreign-born Latinos, for example, 61% said all illegal immigrants should be allowed to stay permanently and be given a chance at citizenship, while only 42% of native-born Hispanics agreed. On this issue, as with other policy matters, income, education and generation all were factors in shaping perceptions.

Family ties and direct experience of immigration are the most powerful indicators of attitudes on this subject. Latinos closest to the immigrant experience are most likely to support the most generous legalization options. Among first-generation Latinos, or the immigrant population, 61% favor allowing all illegal immigrants to remain in the country. In the second generation, or the children of immigrants, the rate is 51%. And, in the third –plus generations, or the U.S.-born children of U.S.-born parents, 40% concur with blanket legalization. Among those Latinos whose language was Spanish, 65% favor allowing all illegal immigrants to stay, compared with 41% among those whose primary language was English and 42% of bilingual Latinos.

Survey questions on temporary worker programs consistently show that a majority of roughly between 55% and 70% favor this alternative while a significant minority of 30% to 40% opposes it. The opposition to such programs draws both people who do not want to grant any form of legal status to undocumented migrants, those who think a temporary program is insufficiently generous and those who question whether a temporary program is practical. 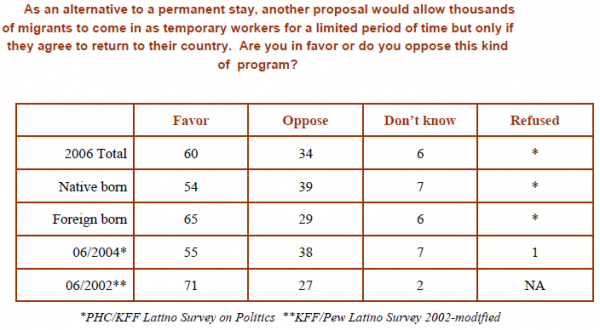 Immigration as an Issue

About 14% of Latinos cited immigration as “the most important problem facing the country today,” second only to the war in Iraq (22%). But Hispanics, who in past surveys have not ranked immigration as a top-tier issue, are divided on how much of a concern it is to them. As with other matters involving immigration, the split is generally between Latino immigrants and Latinos who are born in the U.S. Foreign-born Latinos in this case were more than three times as likely to see immigration as the most important problem compared with native-born Latinos (20% vs. 6%).