Views on the upcoming presidential race in general reflect the same divisions and differences seen in Mexico. In the survey, the responses on political inclinations were within the margin of error, so no firm conclusions can be drawn. However, a plurality (40%) said they did not favor any of the three major parties, the PRI, PAN or PRD, and also said they would not know who they would vote for if the election were held today (33%).

Asked which party they feel closest to, Mexicans in the U.S. chose PAN (27 percent) over PRI (17 percent) and PRD (11 percent). Of the presidential contenders, the PAN candidate, Felipe Calderón, received 26 percent, while Andrés Manuel López Obrador of the PRD received 21 percent, which puts them in a statistical dead heat. Robert Madrazo of PRI was in third place with 13 percent.

Recent polls released in Mexico show somewhat varying results. A survey released by El Universal on February 19 showed López Obrador with 30% in a statistical tie with Calderón at 27% while Madrazo followed with 22%. A survey released by Reforma on February 20 showed López Obrador with 38% of provable voters’ preference, followed by Calderón with 31 % and Madrazo with 29%. (A compilation of the latest news reports and polls on the Mexican elections is maintained by the Mexico Institute at the Woodrow Wilson International Center for Scholars http://www.wilsoncenter.org/index.cfm?topic_id=5949&fuseaction=topics.item&news_i d=143858) 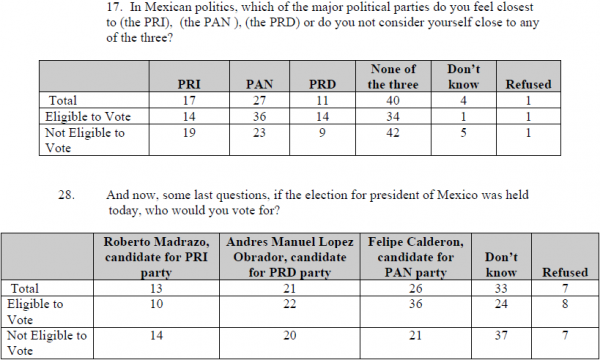 Next: Appendix 1: Background on Voting by Mexicans Abroad
← Prev Page
Page1Page2Page3Page4Page5You are reading page6Page7Page8Page9
Next Page →