Although the CPS does not ask respondents how they voted, it does help resolve an enduring disagreement over how Hispanics voted in the 2004 presidential race. The profile of Hispanic voters in the CPS allows a fresh assessment of data from exit polls, and suggests that Latino support for President George W. Bush may have been lower than initially estimated.

Much analysis of the 2004 election results has been based on the results of a nationwide exit poll which offered detailed information on the demographic and socio-economic characteristics, attitudes and beliefs of voters according to their choice for president. The National Election Pool (NEP) was conducted on behalf of a consortium of news organizations utilizing a well-established methodology that involves interviewing voters at a sample of precincts chosen to be representative of all polling places across the nation. The NEP national exit poll showed that President George W. Bush had taken 44 percent of the Hispanic vote—a 10 percentage point increase over his share in 2000. This finding has proved controversial as a number of scholars and Latino advocates have claimed that it overstates Hispanic support for President Bush (NCLR, 2004; Leal, Barreto, Lee, and de la Garza, 2005; William C. Velasquez Institute, 2004). Some of these critics of the exit poll finding have noted that the 44 percent figure was considerably above the level measured in pre-election polls, and also above the prior record of Republican support attained in the 1984 election when Ronald Reagan won about 37 percent of Hispanic ballots.

The controversy grew more complex when Ana Maria Arumi, a polling specialist then of NBC, which was a member of the NEP consortium, offered fresh insight on the exit poll at an event hosted by the National Association of Hispanic Journalists (NAHJ) on December 2, 2004, and in a brief news item about the event on MSNBC.COM. Arumi said that the selection of sample precincts in the NEP produced an overrepresentation of Cuban respondents in Miami-Dade County, a population that is typically the most pro-Republican segment of the Hispanic electorate. A better assessment of the Hispanic vote, she said, could be developed by aggregating exit polls conducted individually in the 50 states and the District of Columbia. That analysis showed that Bush had drawn 40 percent of the Hispanic votes, she said. Arumi’s comments appear to be the most extensive analysis of the state exit poll findings regarding the Hispanic vote that have been made public by members of the NEP consortium. Full data from both the national and the 51 state polls has become publicly available, and in conjunction with data from the CPS it is now possible to assess these findings.

The national exit poll was based on a sample of 250 precincts designed to be representative of the nation as a whole, and 1,037 respondents at those precincts identified themselves as Hispanics. At the same time as the national poll was being conducted on election day, the NEP was also conducting 51 individual polls designed to produce results representative in each of the 50 states and the District of Columbia. These polls were taken at 1,469 precincts at which 4,469 Hispanics were interviewed. The Pew Hispanic Center has aggregated data from the 51 state polls and weighted the results to produce results for the nation as a whole. As Arumi noted, the 51 state polls show that Bush drew 40 percent of the Hispanic vote rather than the 44 percent in the national poll.

Aside from the overrepresentation of Cuban voters in the Miami area noted by Arumi, a comparison of the Hispanic voters in the national and the state polls offers further indications of why the national poll might have produced a higher level of Latino support for President Bush. Compared to the combined sample in the 51 state polls, the national NEP data has relatively fewer young Latino voters, fewer voters residing in cities with more than 50,000 residents, fewer women, fewer voters who identified themselves as Democrats and fewer who said they disapproved of the war in Iraq. All of these characteristics are shared by Hispanics who voted for Sen. John F. Kerry, the Democratic candidate. 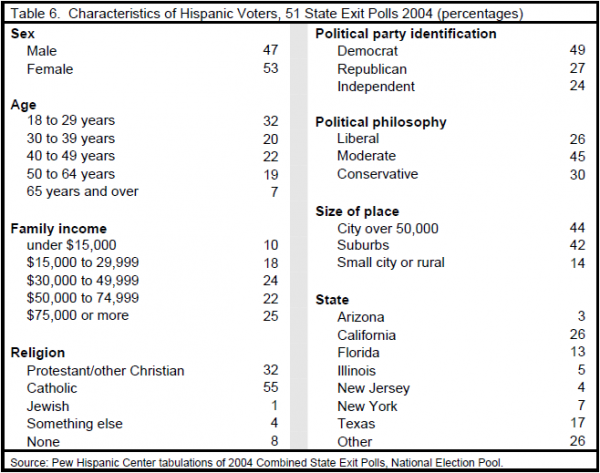 Data from the combined state exit polls suggests that religion may have played a role in President Bush’s greater success with Hispanic voters in 2004 compared to 2000. On this subject the CPS offers no information because it asks no questions regarding religion. Hispanic Protestants, who are mostly evangelicals rather than members of mainline Protestant denominations, made up 25 percent of the Latino vote in 2000 but four years later their share was up to 32 percent, according to the 51 state polls conducted during those elections.1 In addition, this segment of the Latino electorate tilted more heavily for Bush in 2004, giving him 56 percent of their votes compared to 44 percent in 2000. Thus, Hispanic Protestants were both a growing and increasingly pro-Republican constituency between the two elections. Meanwhile, Bush’s share of the Hispanic Catholic vote held steady at 33 percent in the state exit polls. The split between Latino Protestants and Catholics (23 percent) was larger than in the white vote in which 68 percent of Protestants and 56 percent of Catholics voted for Bush. 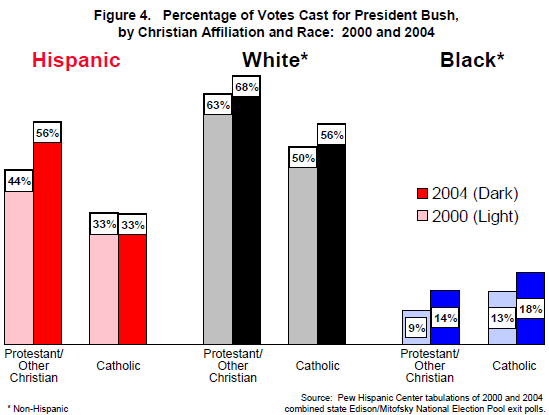 The exit polling data also shed some light on the issue of Latino realignment in political party leanings. Surveys of registered Latino voters typically reveal that Latinos identify with the Democratic Party by at least a two-to-one advantage (Pew Hispanic Center and Kaiser Family Foundation, 2004). This advantage is not apparent in the NEP exit poll. In the 2004 exit poll, 49 percent of Hispanic voters identified with the Democrats, 27 percent with the Republicans, and 24 percent indicated independent leanings. Hispanic Democratic affiliation declined from the 2000 election, wherein the comparable NEP exit poll data indicate a Democratic vs. Republican split of 55 percent versus 24 percent. Whether the decline in the fortunes of the Democrats among Hispanic voters from 2000 to 2004 simply reflects the relative popularity of George Bush among Hispanic voters or a more permanent shift in Hispanic party loyalties remains an open question. 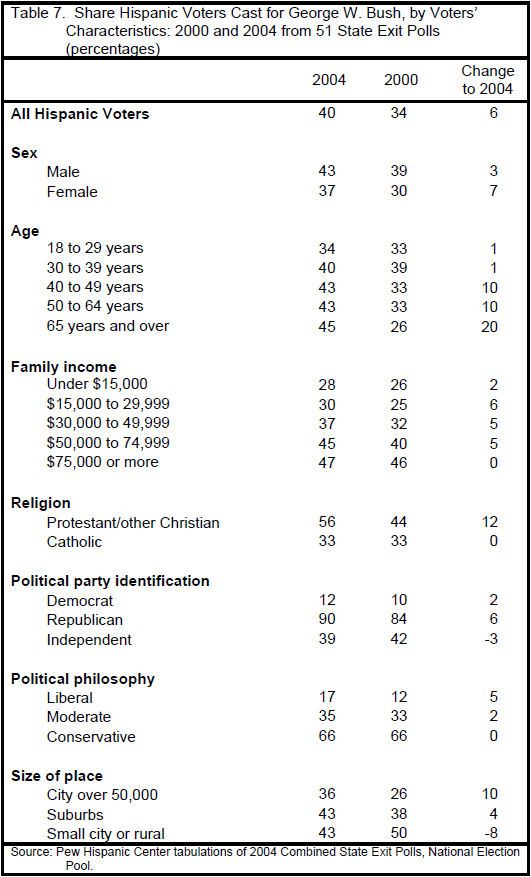