In the future, the growth of the Hispanic population will affect both the payout and revenue sides of the Social Security system. Eventually, when the current stock of young Latinos reaches retirement age, a growing proportion of beneficiaries will be Latino. At the same time, however, the number of Hispanic workers paying into Social Security will more than double as the white baby boom generation moves rapidly from contributor to beneficiary status.

These outcomes result from Hispanics’ demographic characteristics and their different propensity to accumulate wealth and participate in pension plans. The share of retirees who are Hispanic is on the increase. However, Hispanics who will enter retirement in the next 20 years are much less likely to participate in pension plans and have acquired far fewer assets than have whites. Thus, Latino retirees are likely to remain highly dependent on Social Security benefits in the foreseeable future. Conversely, future retirees will be more dependent on Hispanic workers as the number of white workers supporting each retiree steadily declines.

Latinos are a Rising Proportion of Social Security Beneficiaries

Hispanics are not one of the major groups of older Social Security beneficiaries today. They make up 6 percent of the 65-or-older population today and an even smaller proportion of Social Security beneficiaries.6 This will change over time, however. Hispanics are nearly 17 percent of today’s 18-to-44 year-old population. And with additional immigration, Hispanics are projected to comprise 18 percent of the 65-or-older population by 2050 (Figure 7). The Pew Hispanic Center projects that the number of Hispanics age 65 or older is projected to rise from 2 million in 2004 to 14 million in 2050. 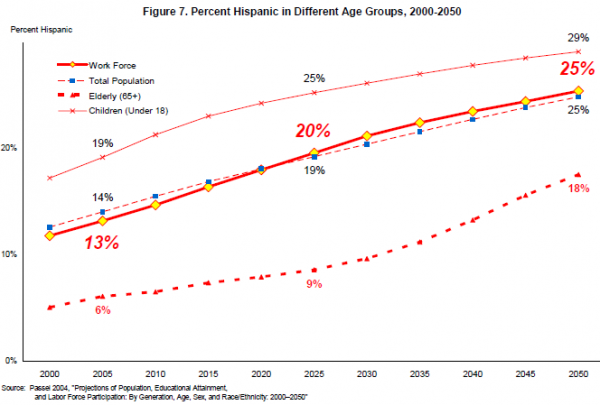 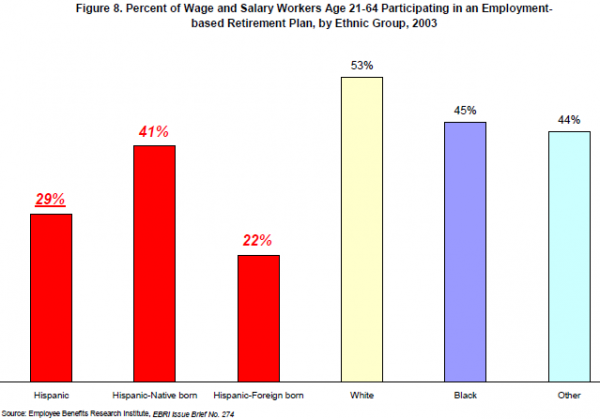 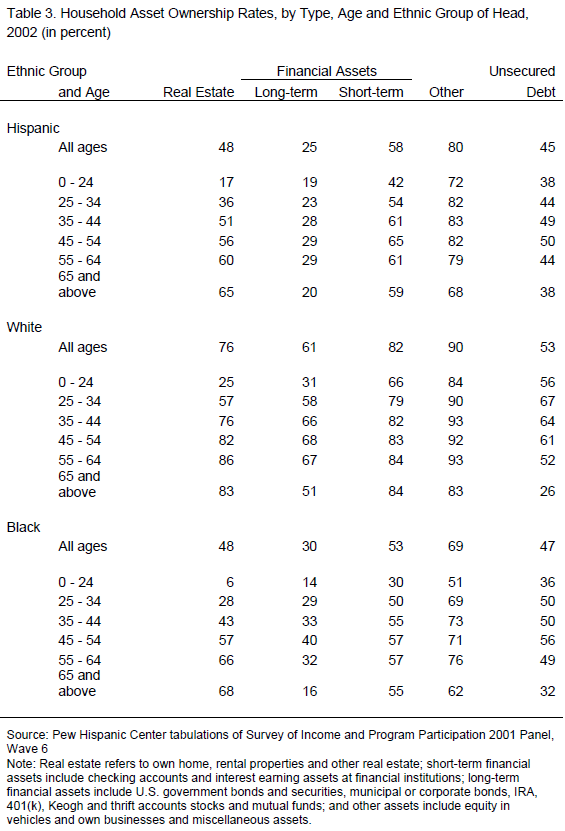 Latinos who do own assets have accumulated far less value in those assets than have whites. Hispanic homeowners between the ages of 45 and 64 have a median equity of about $66,000 in real estate (Table 4). White homeowners, more numerous than Latinos, have much higher equity. In the age bracket of 55 to 64, white homeowners possess a median equity value of $116,713, and those ages 45 to 54 have $83,359 in home equity. A similar disparity emerges with respect to owners of long-term financial assets. White heads of household ages 45 to 64 have at least twice as much value as Hispanic heads of household in these financial holdings. For example, white heads of household ages 45 to 54 owned $40,088 in long-term financial assets compared with only $19,326 for Hispanic heads of households. In sum, not only are Latinos less likely to own assets, those who do have amassed far less wealth than whites. 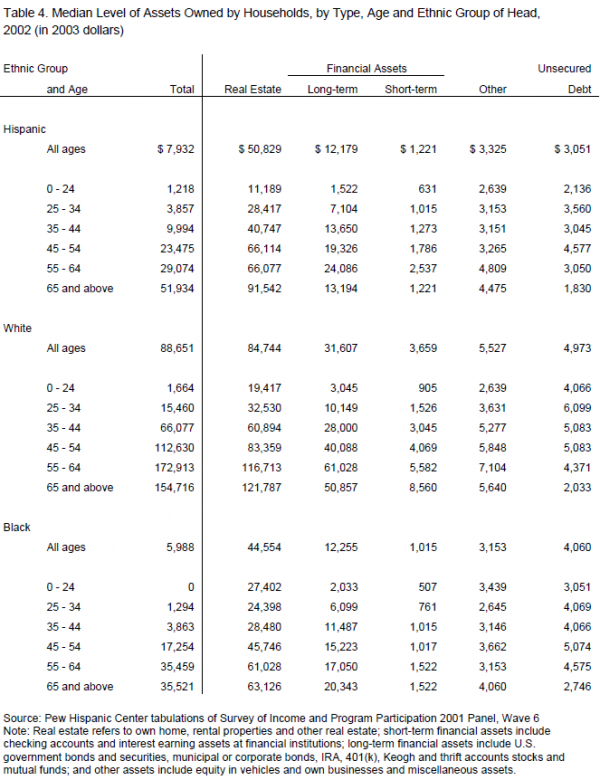 Latinos are Growing Contributors to the Social Security Tax Base

Hispanics are a young and growing population. More than one in three of the nation’s 40 million Hispanics are under age 18 (Figure 1). And Hispanics will account for much of the growth in the labor force to 2050; in fact, the Hispanic labor force will more than double while the white labor force shrinks. Under a pay-as-you-go financing structure such as Social Security has traditionally employed, it is the increasing numbers of Hispanic workers who will support the additional retirees as the nation ages.

It is the absolute growth in the Hispanic work force that truly brings home the growing role of Latinos in the U.S. economy and the financing of Social Security. Between 2005 and 2050, the U.S. labor force is projected to grow by about 39 million, or more than one quarter, from 143 million to 182 million.8 During this time, the Hispanic labor force is projected to grow by 27 million, from about 19 million in 2005 to 46 million in 2050 (Figure 9). This growth is far larger than the 7 million growth projected for blacks and the 11 million growth projected for the Asian-Pacific Islander population. Further, the critical importance of the growth of the Hispanic labor force is highlighted by the slight decline in the size of the white labor force projected over this period from about 100 million to 94 million. In other words, most of the labor force growth in the next 45 years will come from the Latino population at a time when the number of elderly people in the United States will be increasing substantially from 35 million to 77 million (not shown separately). 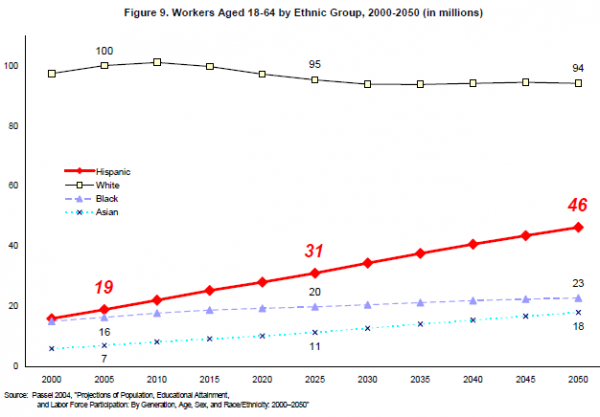 Another view of the role of Hispanics in support of Social Security is given by the ratio of workers to retirees. The decrease in this ratio is at the heart of the Social Security financing problems, as fewer workers are paying taxes to support each retiree.9 In 2005, there are about 4.1 workers per elderly person. About 13 percent of these are Latinos meaning that there are about 0.55 Latino workers per elderly person (Figure 10). 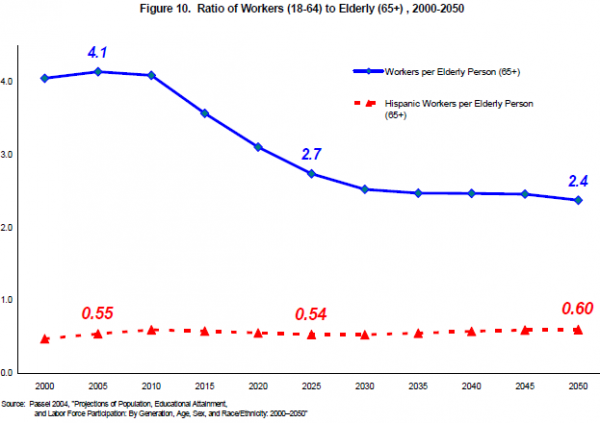 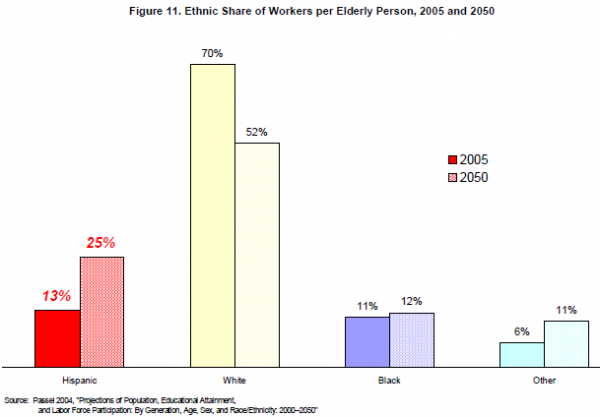