China has emerged as a global economic superpower in recent decades. It is not only the world’s second largest economy and the largest exporter by value, but it has also been investing in overseas infrastructure and development at a rapid clip as part of its Belt and Road Initiative. A new Pew Research Center survey finds that, particularly in emerging markets, publics largely have a positive view of China’s economic stature. People generally see China’s growing economy as a good thing for their country and believe China is having a predominantly positive influence on their country’s economic affairs. 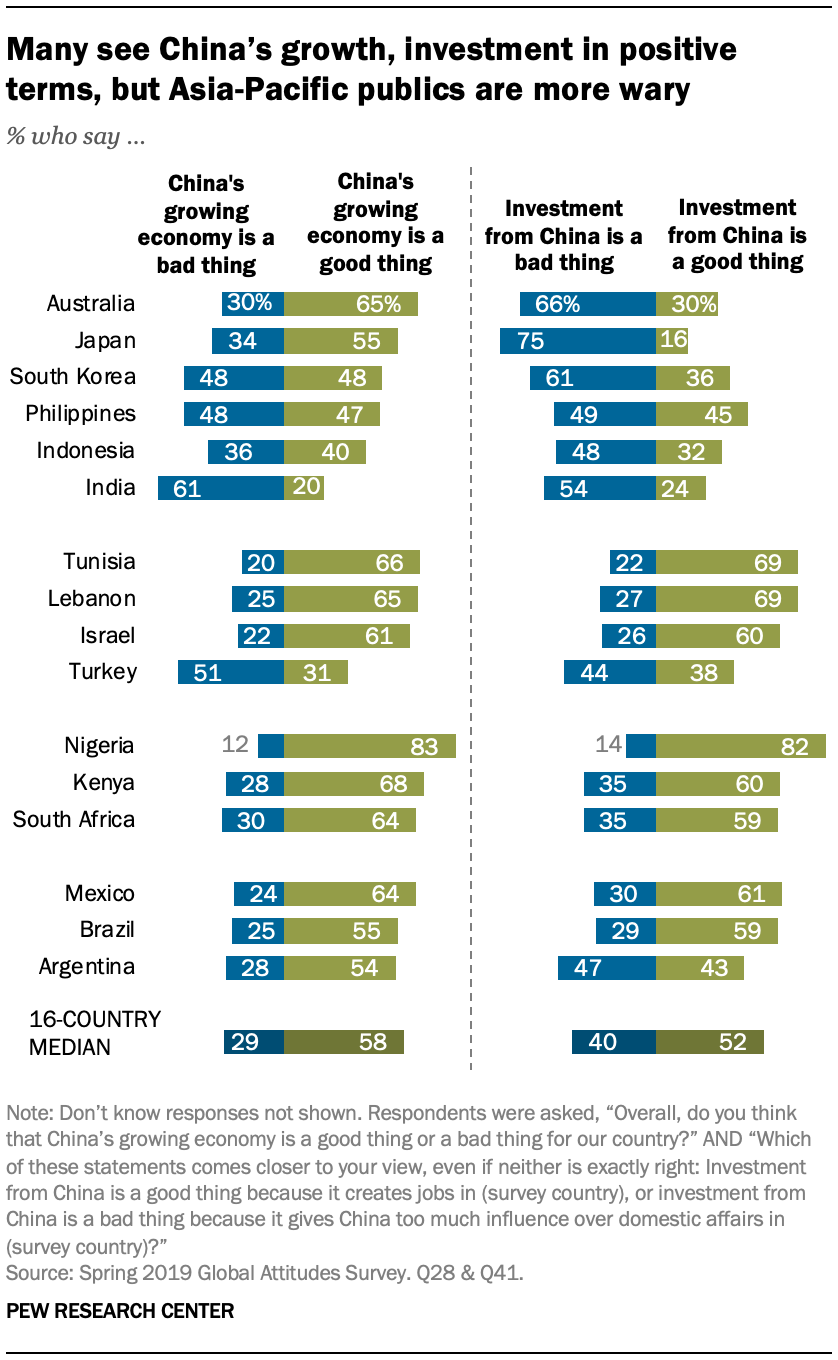 But, even while China’s rise is largely perceived as positive in emerging economies, there are pockets of discontent. First, even in the nations that welcome China’s economic growth, few feel similarly about its growing military might. Rather, most tend to view China’s growing military as something bad for their own countries. Second, China’s neighbors generally take a much more negative stance toward China’s military and economic growth than other countries surveyed. For example, in the Asia-Pacific region, more tend to see investment from China as a potential liability, giving Beijing too much influence over their economies. These same countries are also more likely than others to see U.S. economic influence in their country positively. And, when it comes to developed countries, views of China are much more mixed to negative. Generally, countries with stronger human rights records and lower levels of corruption tend to be much less keen on China.

When it comes to comparisons with the United States, generally speaking, China’s economic influence is seen in similar or even slightly more positive terms. Most publics are about equally sanguine about the state of their country’s bilateral economic relations with China and the U.S. Majorities in most nations also say both the U.S. and China have a great deal or a fair amount of influence on their country’s economic conditions. But, when rating that influence, more people say China’s is positive than say the same of the U.S.

Throughout this report, there are times when we will report 34-country medians and times when we will report 16-, 17- or 18-country medians. This year’s annual survey focused heavily on European public opinion three decades after the fall of communism. Because European respondents were already being asked so many region-specific questions, we did not ask them the entire suite of questions about China and the global balance of power that were asked in other regions.

Throughout the report, data is reported for all countries where the question was asked, so any differences in the number of countries presented in a given section stems from some publics not being asked certain questions.

More still name the U.S. as the foremost economic power than say the same of China. For example, across every country surveyed in Latin America and sub-Saharan Africa, as well as many in the Asia-Pacific, people name the U.S. as the top economy. In the U.S., by a 50%-32% margin, Americans name their own country as the leading economic power, though there are stark partisan differences in these evaluations, with Republicans and Republican-leaning independents being more likely to name the U.S. than Democrats. 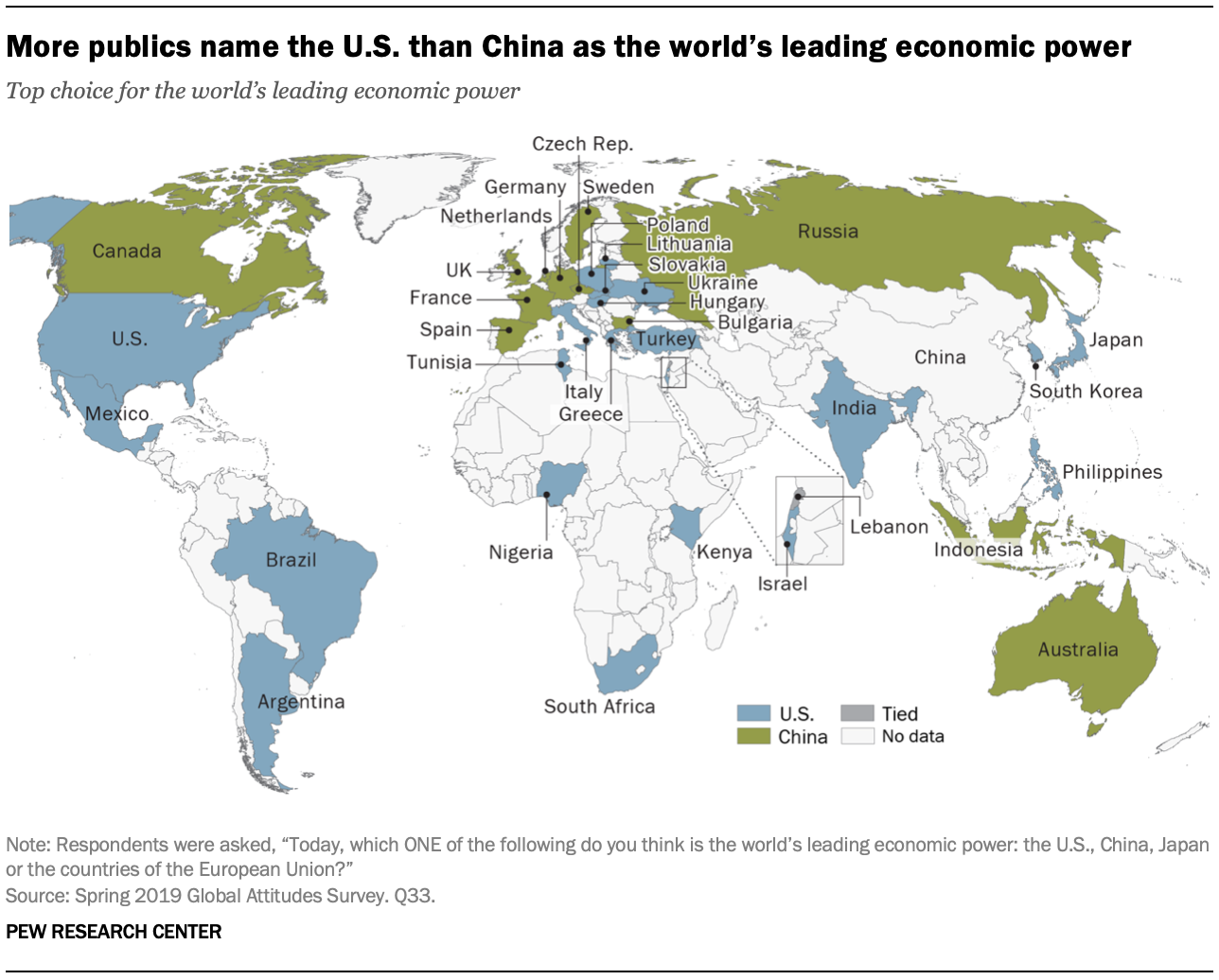 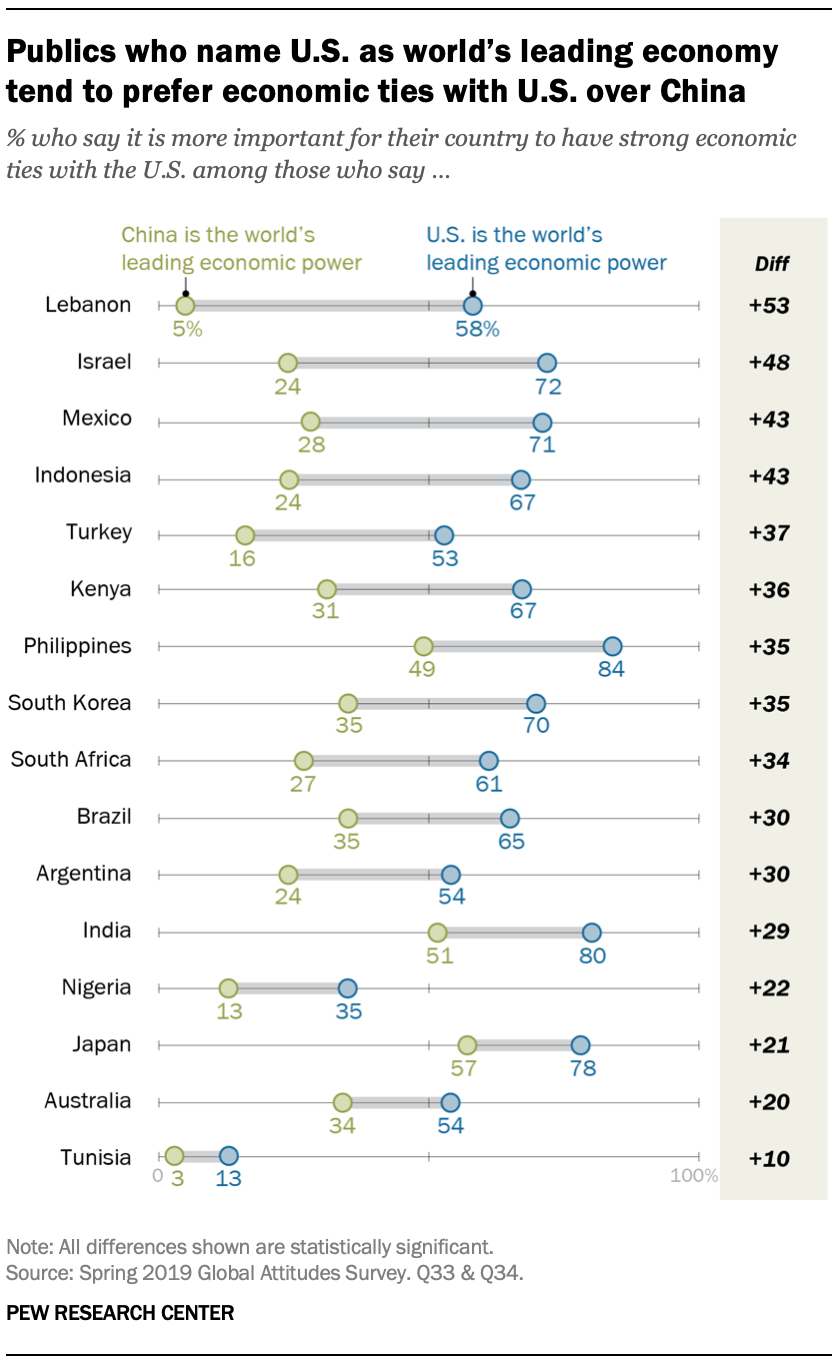 Most also prioritize relations with the United States – though this opinion is colored by perceptions of which economy is stronger. People who name the U.S. as the world’s leading economy are more likely to prefer strong economic ties with the U.S., and the opposite is true when it comes to China. And, when it comes to alliances, many more name the U.S. as the top country their nation can rely on than China.

More countries see U.S. as a top ally than China

In many countries surveyed, the United States is viewed as an important ally. In Israel, 82% name the U.S. as the country they can most rely on as a dependable ally in the future. Across the Asia-Pacific region, around two-thirds or more cite the U.S. as a top ally in Japan (63%), the Philippines (64%) and South Korea (71%). In fact, in every country surveyed, more name the U.S. than China – though opinion is relatively divided in several countries. 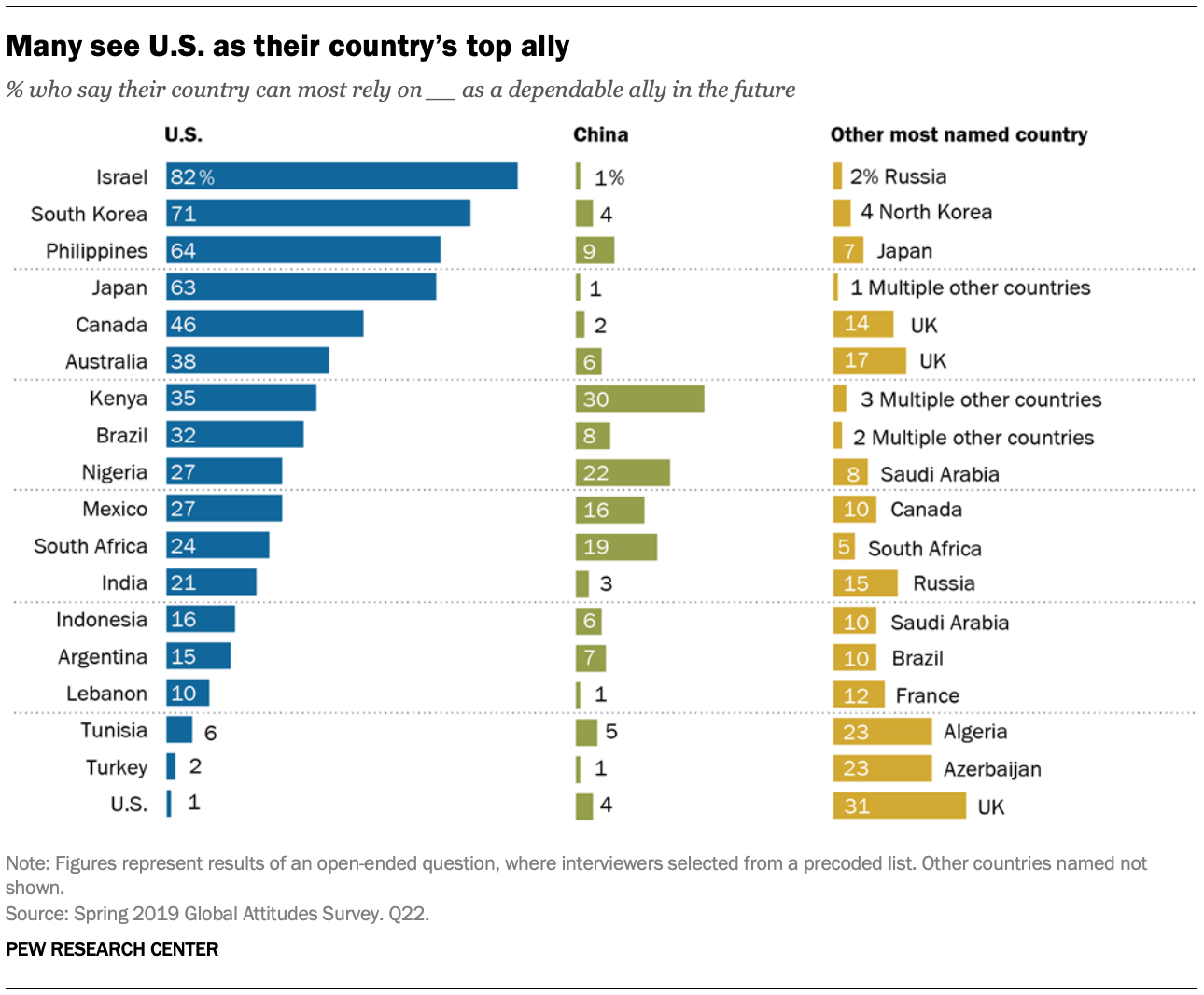 When it comes to which countries are most threatening, though, both the U.S. and China emerge as top concerns across the publics surveyed – though largely in different regions. Across many of the Latin American as well as Middle East and North African countries surveyed, more name the U.S. as a top threat than say the same of China. The opposite is largely true in the Asia-Pacific countries, where many more name China as a top threat, including 40% of Australians, 50% of Japanese and 62% of Filipinos. These countries are also among those that are most likely to say China’s growing military is a bad thing for their country – though a median of 58% across the 18 countries polled generally see downsides to a strengthening Chinese military. (For more on this, see “U.S. is seen as a top ally in many countries – but others view it as a threat.”)

Most say economic relations with the U.S. and with China are positive 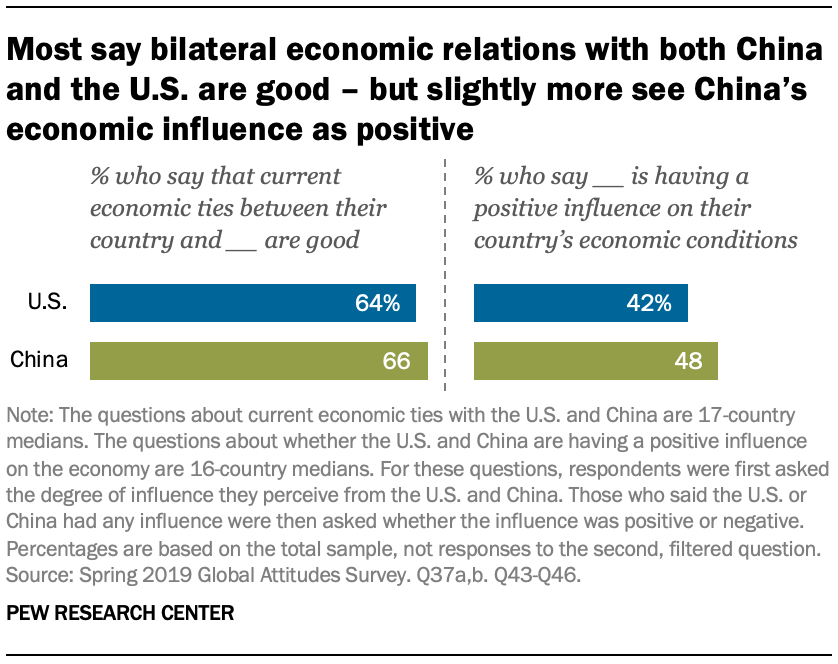 In Latin America, sub-Saharan Africa and the Middle East and North Africa, more tend to rate China’s influence positively than say the same of the U.S. – even in countries where both countries’ roles are seen positively overall. One such example is Nigeria, where 69% say China’s economic influence is positive and 49% say the same of the U.S. Most Asia-Pacific countries, however, tend to say American economic influence is more positive than China’s.

Global views of China are, on balance, mixed. A median of 40% across 34 countries surveyed have a favorable view of China, while a median of 41% have an unfavorable view. But opinion varies considerably across the nations surveyed, from a high of 71% in Russia to a low of 14% in Japan. 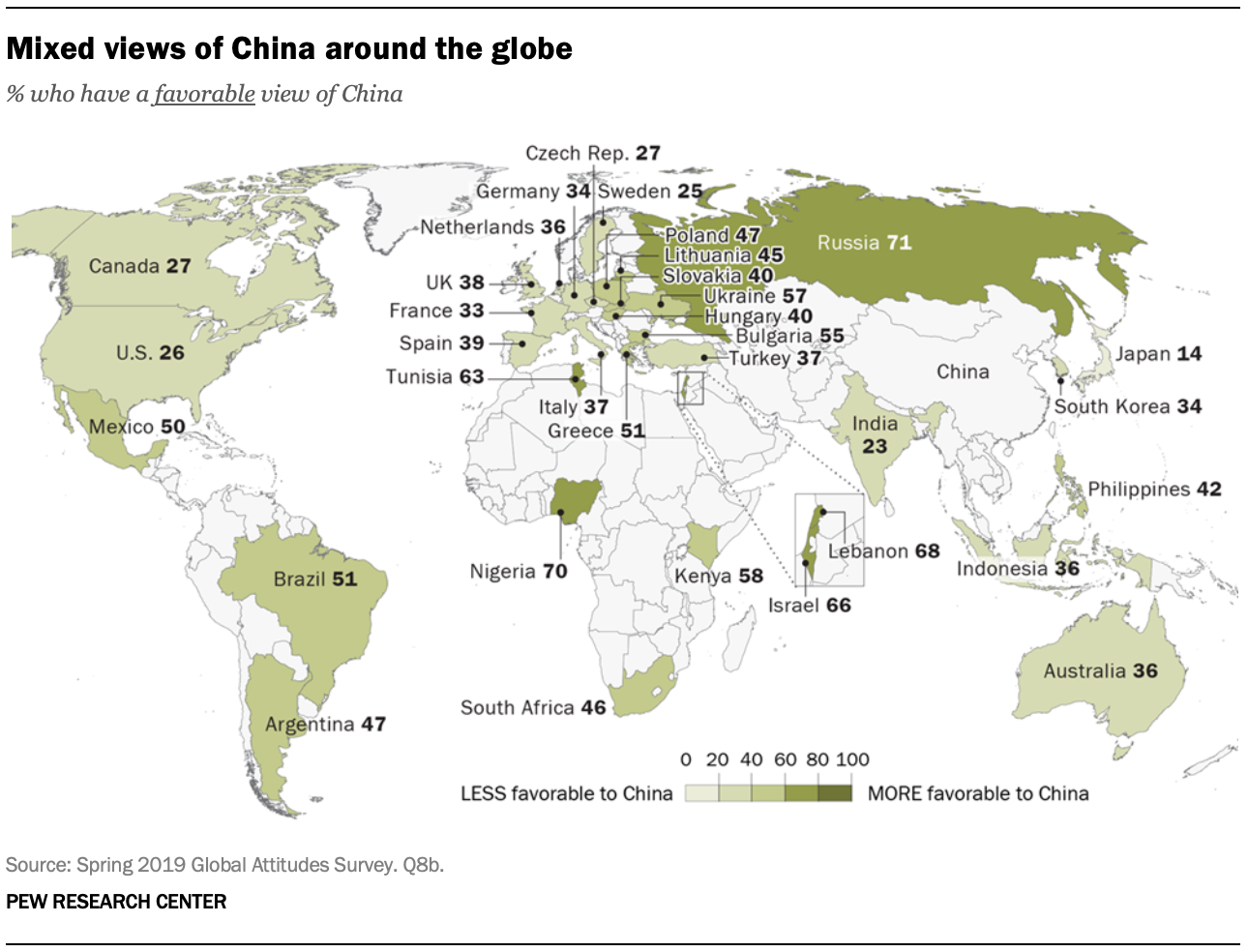 Among a subset of 15 countries that were asked questions about global economic engagement in general and Chinese investment in particular, statistical modeling results indicate that views of China are related to these economic attitudes (for a more detailed explanation, see Appendix).

Views of China’s economic strength play a role in overall evaluations of China. Generally speaking, saying that China is the world’s leading economic power, that China’s growing economy is good for one’s own country, that current bilateral economic relations with the superpower are in good shape or that China’s economic influence is good for one’s country is associated with more positive views toward China, holding other factors constant. But having a higher percentage of imports coming from China is related to more negative views of China.

Greater economic satisfaction and openness to international investment are also related to more favorable views of China. Those who are more satisfied with their own domestic economy tend to have more positive opinions of China. Additionally, those who see it as a good thing when foreign companies buy domestic companies in their country or when foreign companies build domestic companies in their country tend to be more positively disposed toward China. 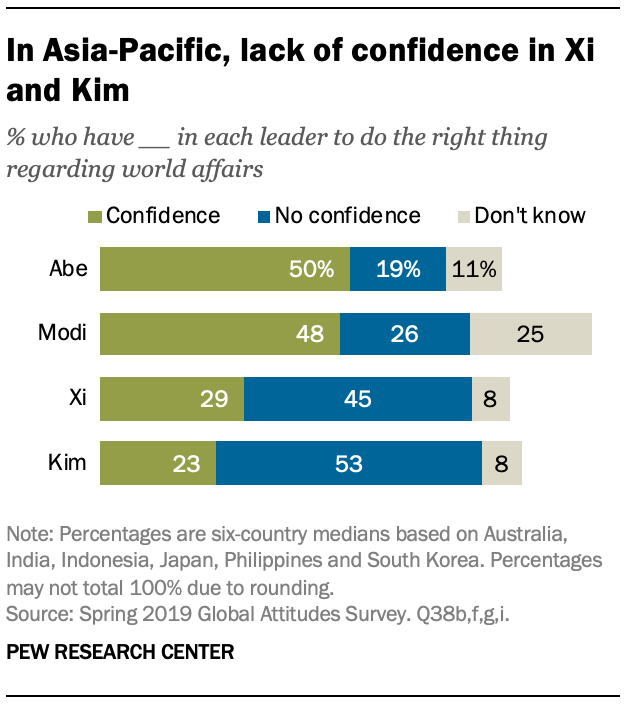 In the six Asia-Pacific countries surveyed, most have little confidence in Xi Jinping when it comes to world affairs. Just 29% have confidence in him to do what is right, which falls far short of the ratings for Japan’s Shinzo or India’s Narendra Modi. And in the Philippines, Indonesia, India and South Korea, nearly equal numbers have confidence in North Korean leader Kim Jong Un as in Xi.

Regional spotlight: Asia-Pacific stands out for more negative attitudes toward China, its role

People in the Asia-Pacific region are generally negative in their views of China, and attitudes in many surveyed countries there have grown more negative in recent years. These countries are more critical of investment from China. Roughly half or more in each Asia-Pacific nation surveyed say Chinese investment is a bad thing because it gives China too much influence, ranging from 48% of Indonesians to 75% of Japanese. South Korea and Indonesia stand out as two countries in which fewer today see benefits from China’s growing economy than said the same five years ago. 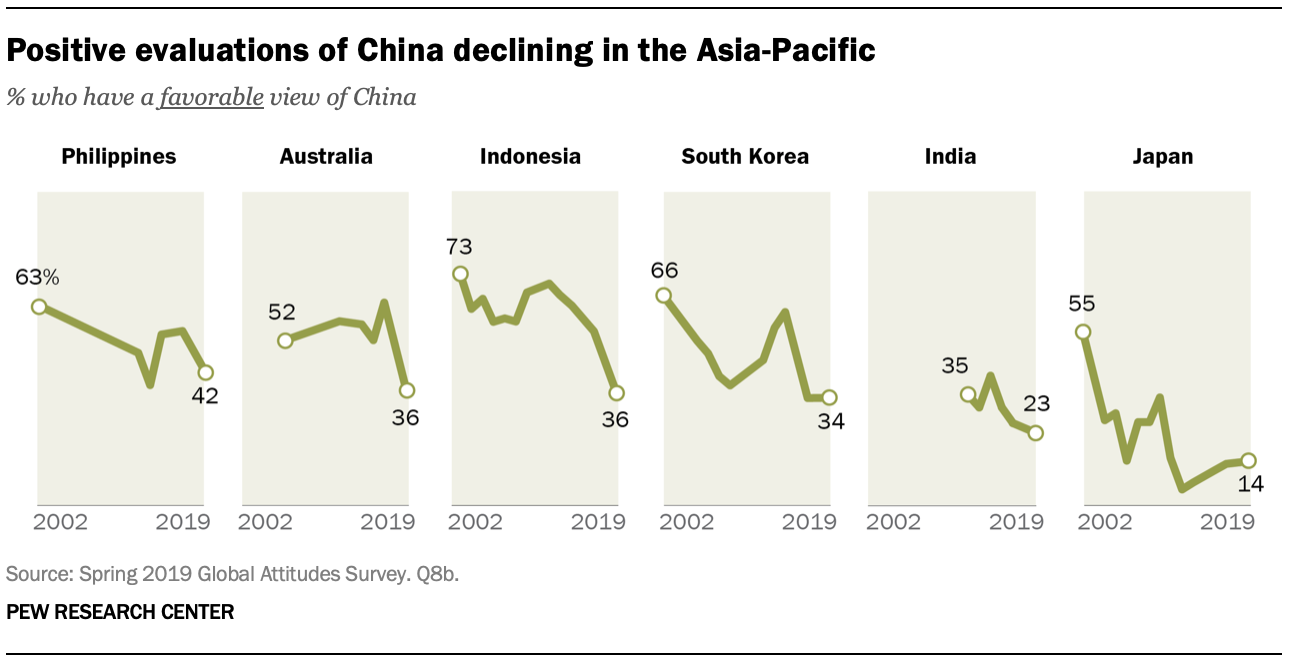 China’s neighbors are especially wary of its military growth. A median of 79% across the region say China’s growing military strength is bad for their country, including nine-in-ten in Japan and South Korea. This depth of concern with China’s growth is mirrored in the relative primacy these countries place on their relations with the United States. In each country in the region, more name the U.S. as their most dependable ally than any other country in an open-ended question, including around two-thirds or more in Japan (63%), the Philippines (64%) and South Korea (71%). Each country in the region also prefers strong economic ties with the U.S. (a median of 64%) rather than China (26%) – and often by a wide margin. In Australia and South Korea, this is a reversal of 2015 opinion, when more preferred close economic relations with China.

Next: 1. Views of the balance of power between U.S. and China
← Prev Page
You are reading page1Page2Page3Page4Page5Page6
Next Page →

China’s Economic Growth Mostly Welcomed in Emerging Markets, but Neighbors Wary of Its Influence
More countries see U.S. as a top ally than ChinaMost say economic relations with the U.S. and with China are positiveInternational views of China vary greatly, colored by economic attitudesFew express confidence in President XiRegional spotlight: Asia-Pacific stands out for more negative attitudes toward China, its role
1. Views of the balance of power between U.S. and China 2. Attitudes toward China Appendix: Factors that influence views of China Acknowledgments Methodology