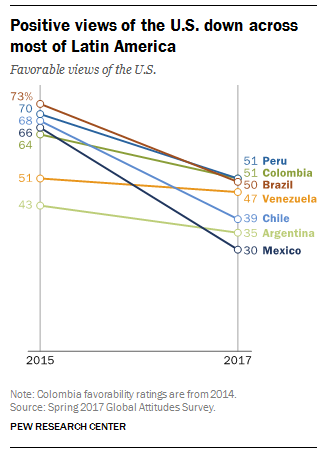 The eighth Summit of the Americas begins this Friday in Lima, Peru. President Donald Trump was originally scheduled to attend the summit, but he has now decided to stay in Washington to address the ongoing crisis in Syria. Vice President Mike Pence will represent the United States in Trump’s place. Pence’s visit comes amid a drop in U.S. favorability across much of Latin America.

These numbers mark a considerable decline since the last Summit of the Americas in 2015. At that time, public opinion of the U.S. in the region was largely favorable: Across the same seven countries, a median of 66% had a favorable view of the U.S., 19 percentage points higher than in last year’s survey.

The decline in favorable opinions of the U.S. across the region was most pronounced in Mexico: About two-thirds of Mexicans (66%) approved of the U.S. in 2015, but that share had fallen 36 points by 2017. 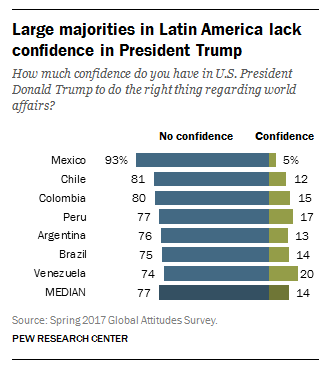 Among 37 countries surveyed globally in 2017, Trump received his lowest ratings on this question in Mexico, where 93% said they have no confidence in the U.S. leader. His proposed wall on the U.S.-Mexico border was also particularly unpopular in the United States’ southern neighbor, where 94% said they disapproved of the project. The border wall was similarly unpopular across the other six Latin American countries surveyed, with a regional median of 83% saying they opposed it. 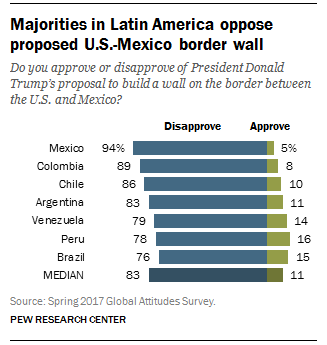 Majorities in Latin America also opposed other possible Trump administration policies, including restrictions on people traveling from majority-Muslim countries to the U.S., and U.S. withdrawal from major international trade and climate change agreements.

Large majorities of people in Latin America also had negative views of Trump’s personal characteristics, describing him as arrogant (a median of 82%), intolerant (77%) and dangerous (66%). However, about three-quarters (77%) also described the president as a strong leader.

The theme for this year’s Summit of the Americas is “Democratic Governance Against Corruption,” with additional focus on corruption’s impact on development and social inequality in the participating countries. The theme is particularly timely for the host country, which saw its president, Pedro Pablo Kuczynski, abruptly resign in March after being accused of accepting illegal payments from a Brazilian construction conglomerate. Kuczynski’s vice president, Martin Vizcarra, was subsequently sworn in as president, and he will represent Peru at the summit.