Rodrigo Duterte claimed the presidency of the Philippines in May 2016, and six months later Donald Trump won the U.S. presidency, capping a year of electoral surprises around the world. While Trump’s first months in office have had a major impact on worldwide perceptions of the U.S., people in the Philippines still like the U.S. and have confidence in its leader. But Filipinos also share positive views of China and its leader, President Xi Jinping. And overall, the perception gap between the U.S. and China in the Philippines is narrowing. 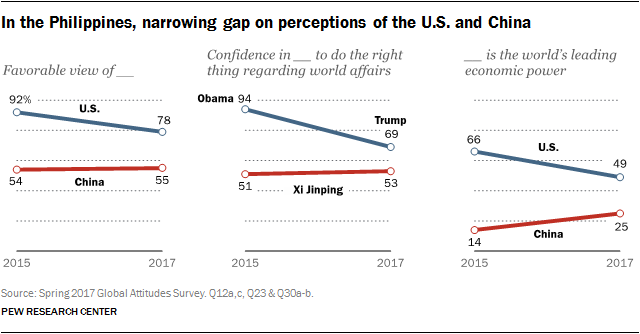 Despite efforts by Duterte to build better relations with China, Filipinos’ attitudes toward China and its leader have not changed much since 2015. But opinions of the U.S. and its president, though still strong, are down from their Obama-era highs. As of this spring, 78% in the Philippines have a positive view of the U.S., down from 92% who expressed positive sentiment in 2015. And despite Filipinos being the most pro-Trump nation in Pew Research Center’s spring 37-country survey, confidence in Trump now is lower than trust in then-President Barack Obama was in 2015. Currently, 69% have confidence in Trump to do the right thing in world affairs, compared with 94% who expressed such confidence in Obama in 2015. 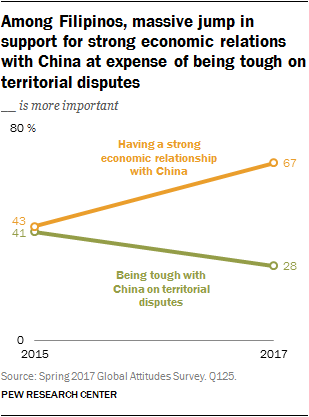 And on global economic status, about half of Filipinos (49%) say that the U.S. is still the leading economic power, but that is down from 66% who said this in 2015. Meanwhile, a quarter now name China as the world’s leading economy, up from 14% the last time the Philippines was surveyed.

In terms of international threats, as government forces continue to battle Islamic militants in the south of the country, seven-in-ten Filipinos say that ISIS poses a major threat to their country. While ISIS is named as the top threat in the Philippines, many in the country also see climate change (65%) and cyberattacks (64%) as major security concerns for their country. And nearly half (47%) name China’s power and influence as a major threat, almost double the share of people in the Philippines who name the U.S. as a major threat (25%). 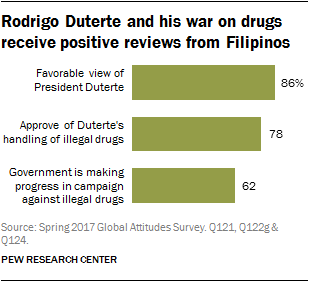 Domestically, despite international concerns leveled by various governments regarding Duterte’s controversial clashes with drug cartels and potential human rights violations, the Filipino leader and his policies are widely popular. Fully 86% have a favorable view of Duterte himself, 78% support his handling of the illegal-drugs issue and 62% say that the Philippine government is making progress in its anti-drug campaign.1 Meanwhile, 78% believe the current economic situation is good and 57% are satisfied with the direction of the country, a 21-percentage-point increase from 2014, the last time this question was asked in the Philippines.

These are among the main findings of a survey conducted by Pew Research Center in the Philippines from Feb. 26 to May 8, 2017, among a nationally representative sample of 1,000 adults.

Duterte and his war on drugs garner widespread approval 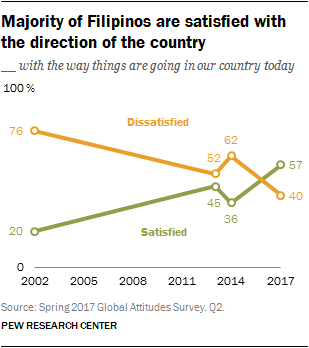 Since being elected in 2016, Philippines President Rodrigo Duterte has waged a war on drugs that has garnered international condemnation, including accusations of crimes against humanity by the International Criminal Court. Yet Pew Research Center’s 2017 survey finds that Duterte is well-liked domestically and his policies, including his approach to the war on drugs, are generally popular among Filipinos. A 57% majority say they are satisfied with the way things are going in their country, up from 36% three years ago. Moreover, 78% believe that the economic situation in the Philippines is good, while only 20% say the economy is in bad shape. 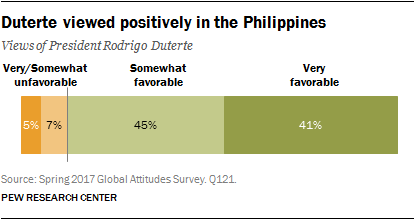 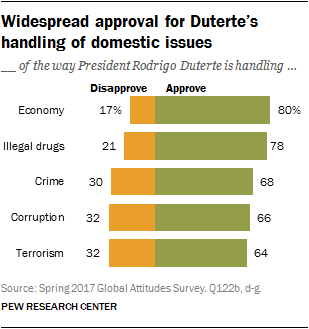 In addition to approving of Duterte’s approach to the war on drugs, a majority (62%) believes the government is making progress in its campaign against illegal drugs, while 21% say that things are the same as they were in the past and 15% say the government is losing ground. 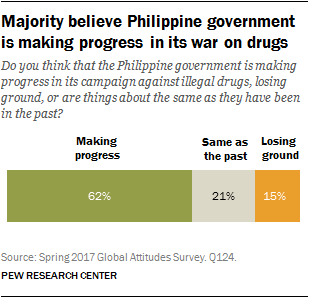 While large majorities of both less-educated and more-educated Filipinos approve of Duterte’s handling of the illegal-drugs issue, these two groups differ on their views of the government’s overall progress in its fight against drugs. Filipinos with a secondary education or above (70%) are much more likely than those with a below-secondary education (49%) to say that the government is making progress in its campaign against illegal drugs. 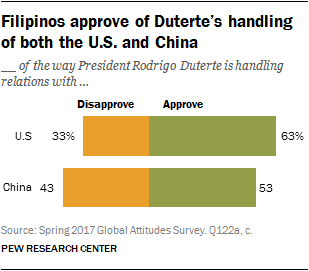 The Philippines is one of 16 official major non-NATO allies of the U.S. The two countries have maintained a strong military relationship for decades, but Duterte has made it a point to court the favor of China, sometimes at the cost of distancing his country from the U.S. Duterte’s balancing act between the two powers has received mostly positive reviews: 63% of Filipinos approve of his handling of relations with the U.S. and 53% approve of how he’s handled relations with China. 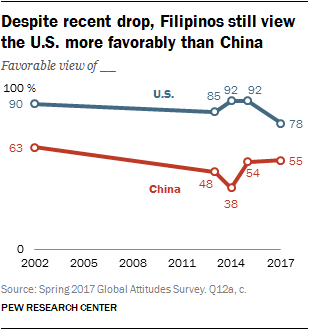 In the Philippines, the public is still more favorable toward the U.S. than China. Roughly eight-in-ten (78%) have a positive view of the U.S., compared with 55% for China. But positive feelings toward the U.S. are down 14 percentage points since 2015 (when Barack Obama was the U.S. president), which coincides with a global decline in U.S. favorability at the beginning of the Donald Trump era. On the other hand, favorable opinion of China has changed little since 2015 and is up 17 points since 2014, when most Filipinos were concerned that territorial disputes with China could lead to a military conflict. 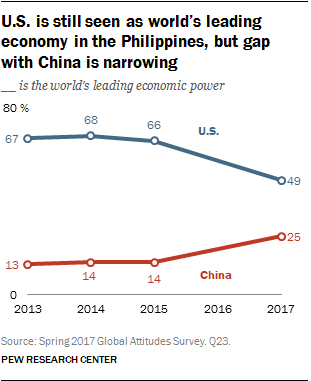 Though there are not significant differences in support for either the U.S. or China across most demographic groups, those with a favorable view of Duterte are more likely to rate China positively (57%) than those who view the president unfavorably (40%). 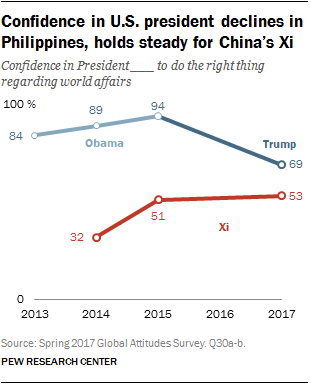 Opinions about which country is the world’s leading economic power are also shifting in the Philippines. While 49% still consider the U.S. the world’s top economic power, this is down from 66% two years ago. Meanwhile, the share of the public naming China has risen from 14% to 25% in that same time period.

Filipinos’ levels of trust in American and Chinese leadership have also started to converge since 2015; trust in China’s Xi Jinping has remained stable, but Filipinos have much less trust in Trump than they did in Obama. In 2015, there was a 43-point gap between confidence in Obama (94%) and confidence in Xi (51%) to do the right thing in world affairs. Now, there is just a 16-point gap between Trump (69%) and Xi (53%).

Across the 37 countries surveyed in 2017, the Philippines is the country where Trump enjoys his highest confidence ratings – and is also the one that has some of the highest ratings globally for Xi.

Both the U.S. and China have their share of issues that have at times caused tensions with the Philippines.

In recent years, the Philippines and China have feuded over territory in the South China Sea, including tense naval standoffs and an international court ruling in favor of the Philippines. Fully 82% of Filipinos say that territorial disputes between the two countries are a big problem. 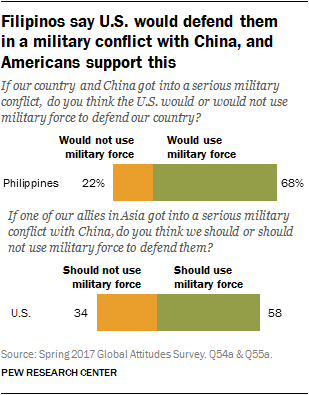 There is general agreement that strong economic relations are preferable to being tough with China on territorial disputes across demographic groups. However, those who view Duterte favorably are much more inclined to support the economic approach (69%) than are those who hold him in an unfavorable light (53%).

ISIS seen as top global threat in the Philippines 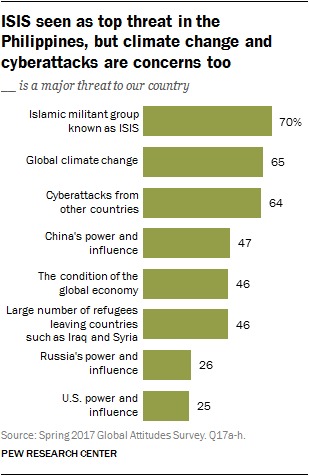 Among eight international concerns tested, the topmost on the minds of Filipinos is the threat of the Islamic militant group known as ISIS, whose affiliates operate in the southern parts of the island nation. Seven-in-ten say ISIS poses a major threat to the country.

Filipinos are also worried about global climate change (65% major threat) and cyberattacks from other countries (64%). Young people ages 18 to 29 are much more concerned about climate change (77%) and cyberattacks (71%) than are those ages 50 and older (58% and 51% respectively). About half of Filipinos are also worried about China’s power and influence, almost double the proportion who say Russia (26%) or the U.S. (25%) are a major threat.

People in the Philippines Still Favor U.S. Over China, but Gap Is Narrowing
Duterte and his war on drugs garner widespread approvalDuterte era sees narrowing of U.S.-China perception gapFilipinos support U.S. military presence and the slow embrace of ChinaISIS seen as top global threat in the Philippines
Acknowledgments Methodology