The financial well-being of lower-, middle- and upper-income tiers varies significantly across the selected Western European countries and the U.S. There are also notable differences in how the disposable incomes of the three economic tiers have changed over time. Households in some countries, such as Ireland, experienced sizable gains in their standard of living, but households in Italy saw their standard of living erode since 1991.21

Wide gaps in household income among the selected countries

Luxembourg had the distinction of having the highest national median household income among the countries covered in this report. From 1991 to 2013, in all years examined, the median income in Luxembourg was about twice as high as the median income of lower-earning countries from among the selected Western European countries. Thus, even within this group of advanced economies, there is a wide gap in earnings across countries. 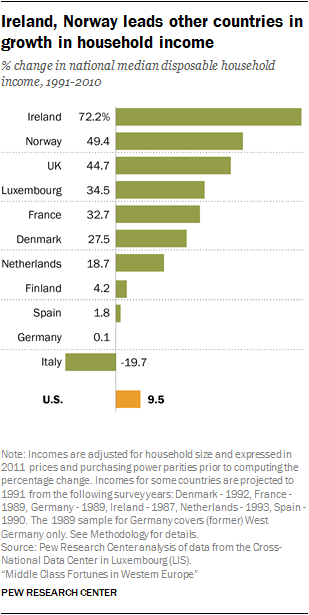 Norway experienced a milder recession compared with the other countries examined and its economy recovered more quickly.25 Thus, Norway stands out as an exception in the post-recession period, lifting the median income of its households from $52,304 in 2010 to $57,031 in 2013. By 2013, the typical household in Norway lived on about $5,000 more annually than the typical U.S. household.

Middle-class incomes are among the highest in the U.S., but lower-income Americans trail many Western European nations 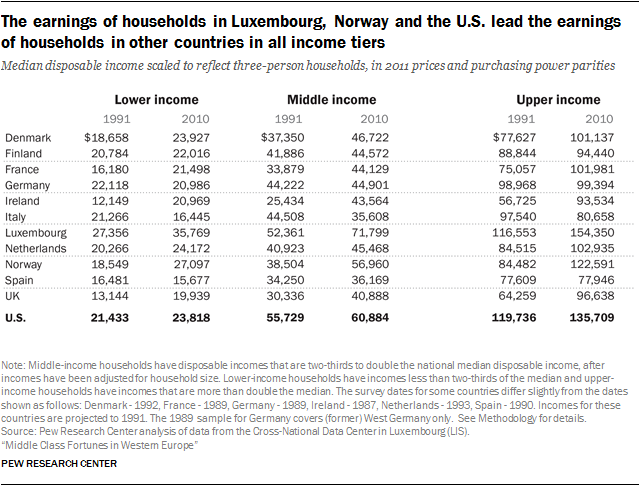 Middle-class incomes are rising, but gains for upper-income households are greater in several countries 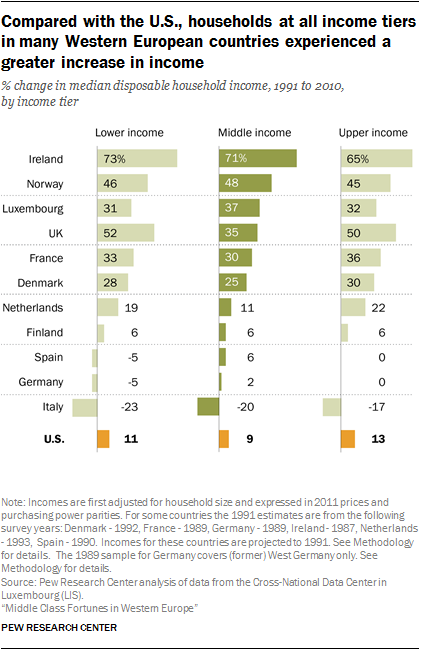 Next: 3. Share of aggregate household income held by the middle class is falling in many Western European nations and the U.S.
← Prev Page
Page1Page2You are reading page3Page4Page5Page6Page7Page8Page9Page10
Next Page →