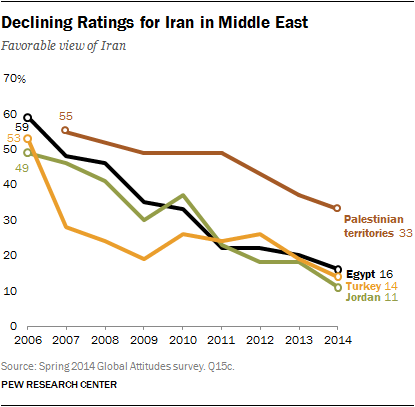 Moreover, ratings for Iran in several Middle Eastern nations have declined significantly in recent years. Iranian President Hassan Rouhani, who was elected just over one year ago, also receives poor marks in the region. In Turkey, Tunisia, Jordan and Egypt, Rouhani is even less popular than his predecessor, the controversial former president, Mahmoud Ahmadinejad. 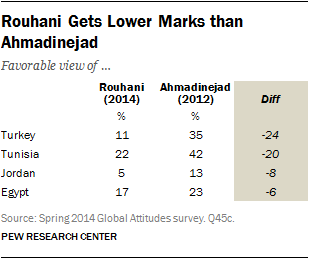 These are among the major findings of a new survey by the Pew Research Center conducted in 40 countries among 44,628 respondents from March 17 to May 25, 2014. The survey also finds that Lebanese views toward Iran continue to reflect Lebanon’s deep religious divisions. Big majorities of Lebanese Shia Muslims express a positive opinion about predominantly Shia Iran and its president, while most Sunni Muslims and Christians see Iran and Rouhani in a negative light.

Iran Unpopular around the World

Attitudes toward Iran are mostly negative worldwide. In 29 of 40 countries, a majority or plurality say they have an unfavorable opinion of the Islamic Republic. The only nations in which at least half express a favorable view are Bangladesh (63%), Pakistan (63%) and Indonesia (51%).

Ratings for Iran are low in the Middle East, and have been dropping steadily in recent years. In 2006, roughly half or more in Egypt, Jordan and Turkey had a positive opinion of Iran; today, fewer than one-in-five in all three countries hold this view. Similarly, Iran’s favorability rating among Palestinians has dropped from 55% in 2007 to 33% now.

In Lebanon, an overwhelming majority of Shia Muslims (86%) have a favorable opinion of Iran, compared with just 13% of Sunni Muslims and 31% of the country’s Christians. About nine-in-ten Israelis give Iran a negative rating, including 97% of Jews and 57% of Israeli Arabs.

Among the P5+1 nations (the five permanent members of the UN Security Council plus Germany) that are engaged in ongoing nuclear talks with Tehran, public attitudes are mostly critical of Iran. Majorities in Germany, France, the United States, the United Kingdom and China give Iran an unfavorable rating. Russians are more divided, although, on balance, still mostly negative (44% favorable, 35% unfavorable).

Iran’s image is largely negative throughout Europe and Latin America. Opinions are more mixed in Asia and sub-Saharan Africa, although in several nations in those regions a significant number of people offer no opinion. 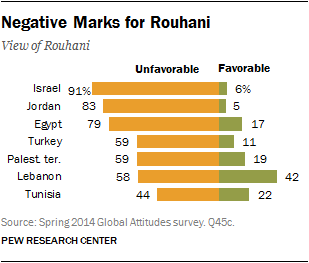 Iranian President Hassan Rouhani is often described as less hardline than other leaders of the Iranian regime, but a year into his tenure, Rouhani receives poor marks throughout the Middle Eastern countries surveyed.

Majorities in six nations express an unfavorable opinion of Rouhani, including roughly eight-in-ten in Jordan and Egypt and about nine-in-ten in Israel. In Tunisia, a 44%-plurality gives him a negative rating. 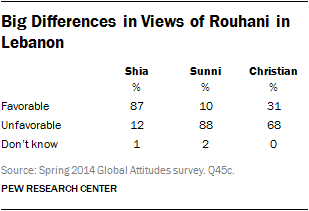 When Pew Research asked the same question about then-President Mahmoud Ahmadinejad in 2012, the controversial Ahmadinejad received better ratings than Rouhani does today in Turkey, Tunisia, Jordan and Egypt.

In Lebanon, opinions about Rouhani once again reflect the country’s religious divisions: 87% of Shia Muslims give him a positive rating, compared with just 10% of Sunni Muslims and 31% of Christians.