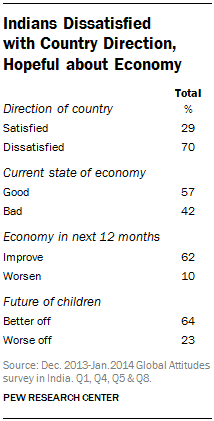 As Indians prepare to head to the polls beginning April 7, they are in a sour mood. They are dissatisfied with the way things are going in their country. This public frustration with the direction of their nation is less a judgment about economic conditions in India or their own personal financial situation and more disgruntlement about a range of problems – from inflation to corruption – that the public perceives to be troubling Indian society. Concerned, Indians express a desire for political change. They want new party and personal leadership at the national level, and they express the view that the opposition Bharatiya Janata Party (BJP) can do a better job handling the nation’s challenges.

Seven-in-ten Indians are dissatisfied with the way things are going in their country; only three-in-ten (29%) are satisfied. This discontent is shared by young and old, rich and poor, urban and rural Indians in almost equal measure: men (72%) and women (67%); Indians ages 18 to 29 (72%) and those 50 years of age and older (69%); those with a primary school education or less (67%) and Indians with at least some college education (75%); and people living in urban areas (72%) as well as Indians in rural areas (68%). People across the political spectrum are dissatisfied. Those who prefer the right-of-center, Hindu-nationalist opposition BJP to lead the next Indian government (71%), those who prefer the current governing coalition led by the left-of-center Indian National Congress (Congress) party (66%) and those who say they would like to see some other leadership (65%) all say things are going poorly in the country.

Nevertheless, more than half (57%) of the public say the current economic situation in India is good. Of these people, just 10% say it is very good and 47% see it as good. Women (61%) are somewhat more satisfied than men (53%). This positive assessment comes despite a recent government estimate that economic growth in the fiscal year ending in March 2014 would be just 4.9%, up only slightly from expansion of just 4.5% in the previous year. Indians in the southern states of Andhra Pradesh, Tamil Nadu and Karnataka are the most dissatisfied with current economic conditions: 60% of them say the national economic situation is bad. 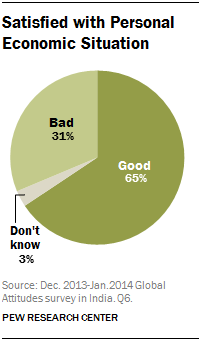 Fully 62% of the public expect the economy to improve over the next 12 months. This optimism is broadly shared across demographic groups. And such sentiment tracks with International Monetary Fund projections that the Indian economy may rebound, growing 5.5% in calendar year 2014 and 7% in 2015.

Having experienced more than a doubling of per capita income between 2004 and 2012 and a dramatic reduction of the proportion of Indians living in poverty, according to the World Bank, 64% of Indians surveyed expect that when today’s children grow up, they will be better off financially than their parents. This expectation is shared by the rich and poor, young and old, and the well-educated and those with minimal education.

Complaints about a Range of Economic Woes

One reason for public dissatisfaction about how things are going in India, despite relatively upbeat sentiment about national, personal and future economic conditions, is widespread concern about a range of specific economic issues.

Nearly nine-in-ten Indians (89%) say rising prices are a very big problem. The consumer price index rose at an annual rate of 8.1% in February 2014, according to the Indian government. But it had been above 9% for every month from April 2012 to December 2013. And food prices – for pulses, cereals, vegetables, fruit, fish and meat –rose by 8.6%, faster than the index in February.

Fully 85% of the public say the lack of employment opportunities is a very big problem facing India. The intensity of concern is greatest in the northern states (92%) (Delhi, Rajasthan, Haryana, Punjab, Madhya Pradesh and Uttar Pradesh) and eastern states (90%) (Bihar, Jharkhand, Odisha and West Bengal) and relatively less intense in the west (77%) (Gujarat, Maharashtra and Chhattisgarh) and south (74%) (Andhra Pradesh, Karnataka and Tamil Nadu). 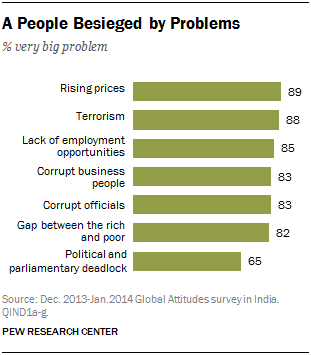 Income inequality in India has doubled in the last two decades, according to the Organization for Economic Cooperation and Development. And more than eight-in-ten (82%) Indians say the gap between the rich and the poor is a very big problem. As might be expected middle-income (86%) and low-income (84%) Indians are more intensely concerned than those with high incomes (74%). It is striking, though, that roughly three-quarters of the most fortunate Indians still express rather strong unease about inequality.

Given the widespread apprehension about the rich-poor gap, it is not surprising that more than seven-in-ten (73%) of the public say that the Indian economic system generally favors the wealthy rather than being fair to most Indians. Such systemic dissatisfaction is shared by the rich and poor, the old and the young, the well-educated and the less-well-educated, and by people in both urban and rural areas.

Compounding disgruntlement with the economy is a general perception of corruption in both the public and private sectors. More than eight-in-ten (83%) say that corrupt officials and corrupt business people are a very big problem in India. And that view is shared across demographic groups. Perception of business corruption as a very big problem is lowest in the south (72%), although seven-in-ten holding such sentiment is hardly an endorsement of business ethics.

Not only do Indians see public officials as corrupt, but they also lament the country’s political gridlock that impairs fixing the nation’s economic problems. Nearly two-thirds (65%) of the public express the sentiment that political and parliamentary deadlock are a very big problem facing the nation. This includes strong majorities of both those who want the Congress party to lead the next government (67%) and those who want the BJP to lead (66%).

Apart from economic, political and ethical challenges facing Indian society, the public is quite worried about homeland security. Nearly nine-in-ten (88%) say that terrorism is a very big problem. Roughly two-thirds say the domestic-based Maoist Naxalite movement is a very serious threat to the country, and a similar proportion views Lashkar-e-Taiba, a Pakistani-based terrorist group, as a dangerous menace.

Despite their strong concern about political dysfunction and corruption, Indians maintain strong faith in the nation’s major public institutions, although their confidence is subdued in some cases. 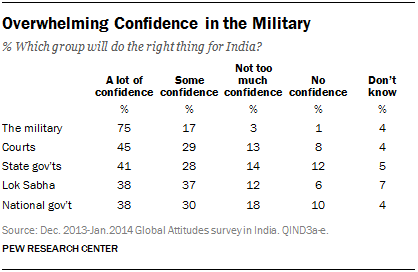 Among the institutions tested, the military enjoys the greatest public support. About nine-in-ten (92%) say they have confidence in the armed forces to do the right thing for India, including 75% who have a lot of confidence.

The Indian public also looks favorably on signature programs by the national government to boost employment and to deal with food costs.

The National Rural Employment Guarantee Act ensures at least 100 days of annual wage employment to every rural household whose adult members volunteer to do unskilled manual labor, such as tree planting and work on irrigation projects. Fully 86% of the public say this jobs effort has been a good thing for India.

There is similarly strong support for the more recent National Food Security Act, which is intended to provide subsidized food grains to approximately two-thirds of the Indian population. The program meets a professed need. Roughly two-in-ten Indians (22%) say that there have been times during the past year when they did not have enough money to buy the food their family needed. In the face of that challenge, eight-in-ten Indians express the view that the new food distribution program has been a good thing for India.

BJP Favored to Deal with Challenges

Looking ahead to the upcoming Lok Sabha election, in light of the problems Indians see facing their society, there is a widespread sense that the BJP would do a better job dealing with these challenges. 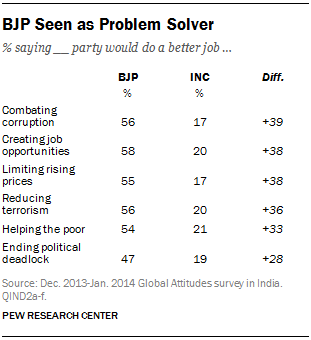 Given their perception that the BJP would do a better job handling many of India’s problems, it is not surprising that more than six-in-ten Indians (63%) prefer the BJP to lead the next national government. Only about two-in-ten (19%) pick Congress. Other parties have the support of 12% of the public.

And the BJP’s prime ministerial candidate, Gujarat Chief Minister Narendra Modi, is more popular than putative Congress party candidate Rahul Gandhi, grandson and son of former Indian prime ministers. Nearly eight-in-ten Indians (78%) have a favorable view of Modi, compared with 16% who hold an unfavorable view. Gandhi is seen favorably by 50% of those surveyed and viewed unfavorably by 43%.

Indians Reflect on Their Country & the World
Chapter 1: Indians in a Sour Mood
Look for ChangeComplaints about a Range of Economic WoesConfidence in Indian InstitutionsBJP Favored to Deal with Challenges
Chapter 2: Indians View the World India Survey Methods