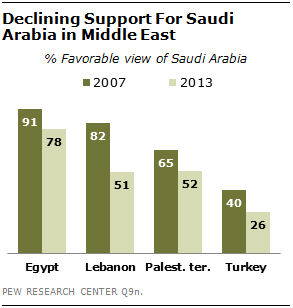 Each year, the world is reminded of Saudi Arabia’s influential status as the birthplace of Islam, as hundreds of thousands of Muslims from across the globe make the Hajj, or pilgrimage, to the city of Mecca. Perhaps owing to its pivotal role within the Islamic faith, Saudi Arabia tends to be viewed favorably in countries that are home to large or majority-Muslim populations.

However, a Pew Research Center survey reveals that Saudi Arabia’s standing has slipped substantially among key Middle Eastern publics, including in Lebanon where favorable opinion has plummeted 31 percentage points since 2007. In contrast, opinion of Saudi Arabia has not soured in other predominately Muslim countries outside of the region.

The reasons for Saudi Arabia’s worsening image in the Middle East are likely multiple. Criticism of the influence the Saudis wield in the Middle East is significant in Lebanon, Tunisia and Turkey. And substantial disapproval of the Saudi government’s track record on protecting the personal freedoms of its citizens is evident in Turkey, Lebanon, the Palestinian territories and Tunisia, as it is in much of the world.

Saudi Arabia is viewed favorably in many countries outside the Middle East where Muslims make up a substantial percentage, if not a majority, of the population. In Pakistan, for example, 95% express a favorable opinion of the Saudi kingdom, while six-in-ten or more in Indonesia, Senegal and Malaysia share this view. However, among its Muslim neighbors, opinions of Saudi Arabia are more varied. Only in Jordan and Egypt is opinion of the desert kingdom overwhelmingly positive (88% and 78%, respectively). Elsewhere in the Middle East, views are mixed or even decidedly negative, as in the case of Turkey (26% favorable vs. 53% unfavorable).

Moreover, in four of the five Middle Eastern countries surveyed in both 2007 and 2013, Saudi Arabia’s image has substantially worsened. The most dramatic decline has occurred in Lebanon, where overall opinion of the Saudi kingdom has fallen from 82% to 51% favorable over the past six years, and the drop is particularly prevalent among Lebanese Shia. Smaller, but significant drops in Saudi Arabia’s standing are evident in Turkey (- 14 percentage points), the Palestinian territories (-13) and Egypt (-13).

These are among the key findings from a Pew Research Center survey conducted in 39 countries among 37,653 respondents from March 2 to May 1, 2013. The poll also finds varied assessments of Saudi influence in the Middle East. Among those who do see significant Saudi influence within their borders, views are mixed as to whether this is a good thing or bad thing. More stark are assessments of Saudi Arabia’s track record on personal freedoms. Among the countries surveyed in the Middle East and elsewhere, only in Jordan, Egypt, Pakistan and Senegal do clear majorities say the Saudi kingdom does a good job of protecting civil liberties.

In the Middle East, overall opinion of Saudi Arabia varies widely, while in countries outside the region that have large or majority Muslim populations, views are generally positive. 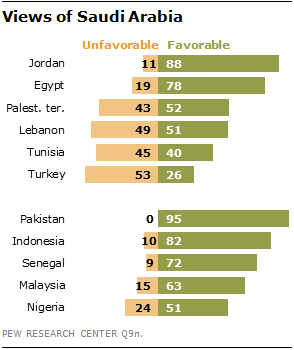 Among its neighbors, Saudi Arabia is viewed favorably by clear majorities in Jordan (88%) and Egypt (78%). Only about half of Palestinians (52%) have a favorable opinion of the desert kingdom, although positive views are more prevalent in the Hamas-controlled Gaza Strip (58% favorable vs. 40% unfavorable) than the Fatah-dominated West Bank (48% vs. 45%). 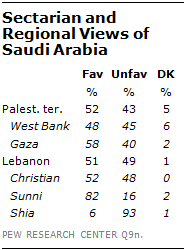 Opinion of Saudi Arabia is nearly evenly split in Lebanon, where 51% see their neighbor in a positive light and 49% see it negatively. Again, religious differences are evident, with roughly eight-in-ten Lebanese Sunni Muslims (82%) expressing a favorable view of the Saudi kingdom, compared with just 6% of Lebanese Shia. Lebanese Christians occupy the middle ground, with 52% favorable and 48% unfavorable toward Saudi Arabia.

Tunisians are also divided, with 40% holding a favorable view of Saudi Arabia, and 45% holding a negative view. Turkey, which is not only a regional neighbor but a fellow G20 member, is the only country polled where as many as half (53%) see the Saudi kingdom in a negative light.

Outside the Middle East, in the other publics polled where Muslims make up a substantial portion of the population, half or more have a favorable view of Saudi Arabia. Pakistanis show the most support for the desert kingdom, with 95% holding a favorable opinion and none expressing an unfavorable view. Majorities in Indonesia (82%), Senegal (72%), and Malaysia (63%) also view the kingdom favorably. In Nigeria, 51% hold a positive view of Saudi Arabia. 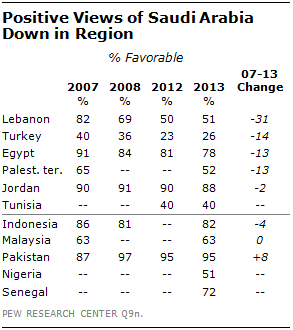 However, the drop in support from Lebanon is even steeper. In 2007, 82% of the Lebanese public had a favorable view of the Saudi kingdom, but that has plummeted 31 percentage points, to just 51% today. The drop is especially pronounced among Lebanese Christians (-38 percentage points) and Shia Muslims (-57 percentage points).

Despite declines in those key countries, views of Saudi Arabia are basically unchanged in Jordan, Indonesia, and Malaysia since 2007. Moreover, favorable opinions have risen in one country – Pakistan (up 8 percentage points). 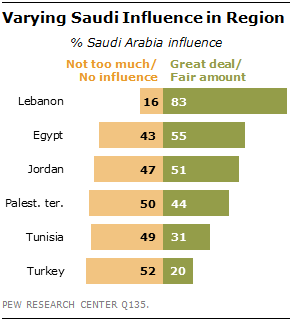 In Egypt (55%) and Jordan (51%), half or more say Saudi Arabia exerts significant influence on how things are going in their country, compared with even fewer who say the same in the Palestinian territories (44%), Tunisia (31%), and Turkey (20%). 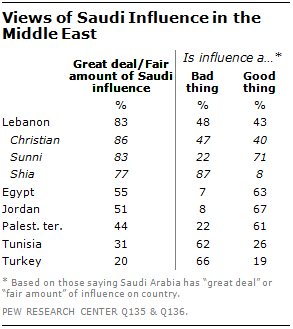 In Lebanon, among the overwhelming majority who see Saudi Arabia as a major influence on their country, only 43% say this is a good thing, while 48% say it is a bad thing. However, behind these numbers is a sharp sectarian divide: Lebanese Shia who perceive Saudi Arabia reaching into their country overwhelmingly say this is a bad thing (87%), compared with 71% of Lebanese Sunnis who see – and welcome – Saudi influence. Lebanese Christians are more evenly divided (40% good thing vs. 47% bad thing).

In Jordan (67%), Egypt (63%), and the Palestinian territories (61%), six-in-ten or more among those who perceive significant Saudi influence in their country say this is a good thing. By contrast, among the minority in Turkey and Tunisia who see Saudi Arabia extending its reach across their border, majorities (66% and 62%, respectively) think this is a bad thing.

In the Middle East, Saudi Arabia receives mixed marks when it comes to respecting the rights of its citizens. Only in Jordan (60%) and Egypt (59%) do clear majorities say the Saudi government protects the personal freedoms of its people. Elsewhere in the region, half or more take the opposite view.

However, in countries outside the Middle East that are home to substantial or majority Muslim populations, Saudi Arabia is generally given credit for protecting the liberties of its citizens. Half or more in Pakistan (65%), Senegal (63%), Nigeria (55%), and Indonesia (52%) say the Saudi regime protects personal freedoms within its borders.

By contrast, opinion of Saudi Arabia’s record on civil rights is highly critical in Europe, where as many as eight-in-ten or more in Spain (86%), Greece (84%), and France (81%) think the Saudi government does not protect the personal freedoms of its people. In North America, 74% of Canadians and 72% of Americans agree, as do 71% of Israelis.

Opinion is more mixed in Asia and Latin America, but nowhere in those regions does a clear plurality give Saudi Arabia’s track record on civil liberties favorable marks.