Criticized by some for being insufficiently pro-Israel during his first term, and dogged by relatively low ratings in Israel during his first term, President Obama travels there this week for meetings with Prime Minister Benjamin Netanyahu and to deliver a major address in Jerusalem. The Obama administration can only hope this speech is more warmly received among Israelis than his last high-profile address in the region at Cairo University in June 2009.

The Cairo speech was the most prominent piece of the newly-elected president’s outreach to the Muslim world. Following years of rampant anti-Americanism during George W. Bush’s tenure, Obama set out to transform America’s image in predominantly Muslim nations, many of which are vital to U.S. interests. At the time, polling found that the speech led to at least some improvement in perceptions of the U.S. among Palestinians, albeit temporary. However, it had the opposite effect in Israel. 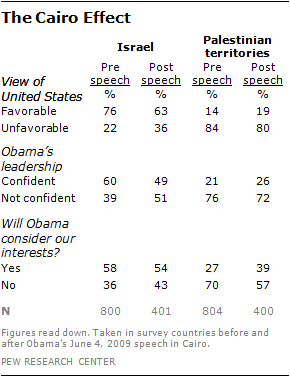 Israelis gave both Obama and the U.S. lower ratings following the president’s Cairo speech than they did before. Fully 76% of Israelis had a favorable view of the U.S. prior to the address, compared with 63% afterward, according to a May-June 2009 Pew Research Center poll. Six-in-ten Israelis expressed confidence in Obama to do the right thing in world affairs before Cairo; just 49% held this view following the speech.

Two years earlier, 57% of Israelis had voiced confidence in Bush’s leadership. Among the 25 publics surveyed by Pew Research in 2009, Israel was the only one in which Obama’s ratings were not more positive than Bush’s during his final two years in office.

The 2009 poll also found signs that the Cairo speech was more favorably received in the Palestinian territories. Most notably, the percentage of Palestinians saying they believed Obama would consider their interests when making foreign policy decisions rose from 27% pre-speech to 39% post-speech. Overall ratings for the U.S. and Obama also improved, but only marginally (+5 percentage points, a difference that is not statistically significant).

Recent polling shows that some Israelis continue to have misgivings about Obama. An October 2012 Jerusalem Post survey found that 28% of Israeli Jews described Obama as more pro-Palestinian, while just 18% saw him as more pro-Israel (40% said he is neutral). The administration obviously hopes to improve the president’s image in Israel with this visit and the Jerusalem speech.

However, in many ways the years since the Cairo address highlight the limits of speechmaking. Despite the favorable reaction among some Muslims to Obama’s 2009 rhetoric, four years later America’s image remains largely negative in many strategically important Muslim nations. In Egypt, ratings for the U.S. are lower today (19% favorable in the 2012 poll) than in spring 2009 (27%). Meanwhile, just 15% of Turks gave the U.S. positive marks in 2012. And in Jordan, where Obama will also visit this week, it was just 12%.