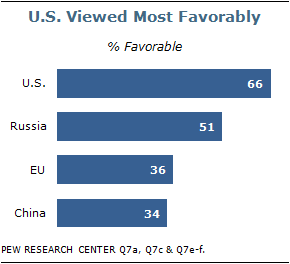 The United States enjoys a largely positive image among Indians: solid majorities have a favorable view of the U.S., express confidence in U.S. President Barack Obama, and believe the U.S. takes India’s interests into account when making foreign policy.

Moreover, Indians assign higher ratings to the U.S. than to other leading powers. About half (51%) have a positive opinion of Russia, while only 36% say the same about the EU.

Meanwhile, views toward China have turned sharply negative over the last year. In 2009, 46% of Indians expressed a positive view of China, compared with just 34% this year.

Indians see their own country as a rising global power. Nearly nine-in-ten Indians say their country already is (38%) or will eventually be (49%) one of the most powerful nations in the world. Just 8% say India will never be one of the world’s leading powers.

Most Indians also think their country is popular abroad. However, India actually receives mixed reviews from its Asian neighbors. 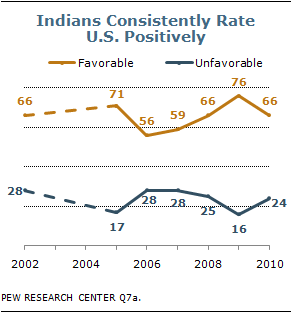 America’s image in India has been generally positive in all Pew Global Attitudes surveys dating back to 2002, and this year roughly two-thirds (66%) of Indians have a favorable opinion of the U.S.; just 24% express an unfavorable view. Still, positive ratings for the U.S. are less common now than in 2009, when 76% held a favorable view.

Indians with higher household incomes and higher levels of education are especially likely to express a positive view of the U.S.4 At least seven-in-ten high- (72%) and middle- (70%) income respondents give the U.S. favorable ratings, compared with 54% of those in the low-income group. 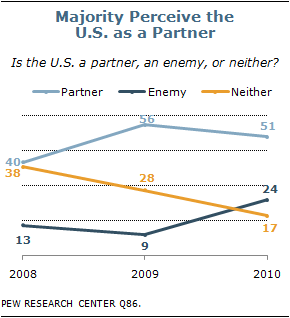 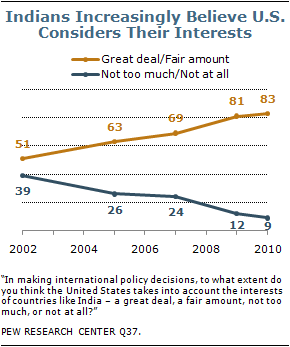 About half of Indians (51%) consider the U.S. a partner to their country, down slightly from 56% last year, but considerably higher than the 40% observed in 2008. Meanwhile, 24% regard the U.S. as an enemy, up from 9% in last year’s poll. The percentage that sees the U.S. as neither a partner nor an enemy has dropped significantly over the last two years, falling from 38% in 2008 to 17% today.

A common complaint about American foreign policy in many countries is that the U.S. acts unilaterally in world affairs, failing to take into account the interests of other nations, but this is not the case in India. Fully 83% of Indians think the U.S. takes into account the interests of countries like theirs when it is making foreign policy decisions – the highest percentage among the 21 countries surveyed outside the U.S. The view that the U.S. considers India’s interests has become steadily more common since 2002, when only 51% held this view.

President Barack Obama also receives largely positive ratings in India. Nearly three-in-four (73%) say they have a lot or some confidence in Obama to do the right thing in world affairs. Just 15% have not too much or no confidence in the American president.

Most Say U.S.-India Relations Have Improved 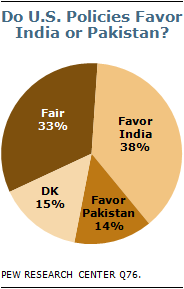 Six-in-ten Indians think that relations between their country and the U.S. have improved in recent years, while 29% say they have not improved. Indians are less likely to say the relationship is improving than was the case in 2009, when 70% held this view.

Indians are divided over whether relations between the U.S. and neighboring Pakistan have improved in recent years: 40% say they have improved, while 44% believe they have not.

A 38% plurality believes that U.S. policies toward India and Pakistan favor India too much, while 33% say they are fair and 14% say they favor Pakistan.

Looking at Pakistani public opinion on these same questions, 37% believe relations between the U.S. and India have improved in recent years, while 32% say they have not. Pakistanis are also somewhat divided over whether relations between their own country and the U.S. have improved: 36% say yes, 39% no. Regarding American policy in South Asia, nearly half of Pakistanis (47%) say the U.S. favors India too much; 13% believe U.S. policy is fair and just 6% say it favors Pakistan. 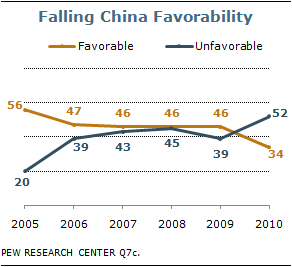 Indian views of China have grown significantly more negative over the last year. Currently, just 34% hold a favorable opinion of China, while 52% have an unfavorable opinion. In 2009, 46% expressed a positive and 39% a negative view. As recently as five years ago, positive ratings of China outweighed negative ones by a 56% to 20% margin.

The percentage of Indians who consider China an enemy has almost doubled since last year’s poll. Today, 44% hold this view, compared with 23% in 2009. Roughly a third (32%) now label China a partner, down from 43% last year.

About four-in-ten Indians (42%) consider China a very serious threat to their country; another 28% say it is a somewhat serious threat. Fewer than one-in-five think it is either a minor threat (11%) or no threat at all (8%). 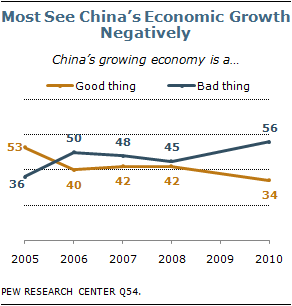 Concerns about China’s economic power are also on the rise – 56% say China’s growing economy is a bad thing for India, up from 45% in 2008.

China’s expanding military might is viewed even more negatively. More than six-in-ten (64%) believe that China’s growing military power is a bad thing for India; 27% consider it a good thing. Opinions on this question have changed little since 2008, when 62% said it was bad for India and 24% believed it was good. 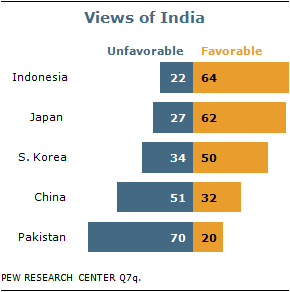 Overwhelmingly, Indians believe that their own country is perceived positively abroad; 87% say India is generally liked around the world, while just 12% think people in other countries dislike India. Of the 22 nations surveyed, only in Indonesia do more (92%) say their country is well-regarded.

However, India does not receive uniformly positive ratings from the five other Asian publics included in the survey. Majorities in Indonesia (64%) and Japan (62%) offer favorable opinions; views of India are also, on balance, positive in South Korea, where half give the country a favorable rating and about a third (34%) give it an unfavorable rating.

In Indonesia, Japan and South Korea, ratings for India are higher than those for China, another major Asian power. Just 38% in South Korea and even fewer (26%) in Japan give China a favorable rating, while majorities in both (56% and 69%, respectively) give it an unfavorable rating. And while most Indonesians (58%) offer positive opinions of China, even more express favorable views of India. Pakistanis, on the other hand, have far more positive views of China than they do of India; more than eight-in-ten (85%) in that country give China a favorable rating. 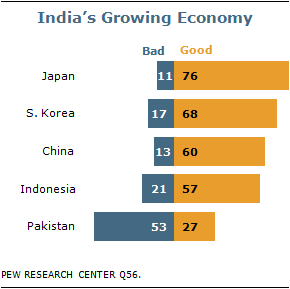 With the exception of Pakistan, majorities in all of the Asian countries surveyed see India’s growing economy as a good thing for their countries. Views of India’s economic power are particularly positive in Japan and South Korea, where at least two-thirds consider it a good thing (76% and 68%, respectively). Nearly six-in-ten in Indonesia (57%) also offer positive assessments of India’s growing economy.

Despite the fact that only about one-third of Chinese have a favorable overall opinion of India, six-in-ten say India’s growing economy is good for China. Moreover, 53% of Chinese characterize the relationship between India and their country as one of cooperation; only 9% describe it as one of hostility; 23% say it is neither, while 15% have no opinion.

Next: Chapter 3. Views of National Conditions and the Economy
← Prev Page
Page1Page2You are reading page3Page4Page5Page6
Next Page →