In nine of the 13 countries included in this analysis, members of the middle class were notably more likely than those who earned less to say that living in a country where honest elections are held regularly with a choice of at least two political parties is very important.5 The differences between income groups in these nine countries ranged from seven to 14 percentage points.

Middle-income earners in Chile and Russia are most likely to differ from the less wealthy in their respective countries. Eight-in-ten middle-class Chileans considered honest elections very important while about two-thirds (66%) of less wealthy Chileans held the same view. In Russia, about half of the middle class (51%) considered honest elections very important, while 37% of less well-off Russians felt the same.

The poll found similar differences among the middle class and the less wealthy in Ukraine and Venezuela (12 percentage points each).

Large majorities across income groups in most of these 13 countries favored a fair judicial system, though in eight of the 13 publics, the middle class was even more inclined than the less wealthy to consider equal judicial treatment very important.

Nearly seven-in-ten (68%) middle-class South Africans said it is very important to live in a country where there is a judicial system that treats everyone in the same way; only half (50%) of less wealthy South Africans expressed the same view.

Less pronounced, but still substantial, income group differences were found in Russia and Chile. Nearly eight-in-ten (78%) middle-income Russians felt fair treatment under the law is very important while 66% of low-income earners agreed. In Chile, 85% of the middle class embraced the need for an impartial judicial system while 75% of the less-wealthy agreed.

Individual liberties generally mattered more to middle-income households than to those with more limited financial resources. In seven of the 13 countries surveyed, more middle- than lower-income earners said living in a country where you can openly say what you think and can criticize the government is very important.

The gap in views between income groups was greatest in Chile (13 percentage points), India (11 points) and Russia (11 points).

Freedom of the Press

In eight of the 13 countries, freedom of the press was rated as very important by at least half of both the middle-class and the less well-off. Gaps in views between income groups were still found among many of the countries surveyed.

In several instances, the gaps represent a fundamental difference of views. For example, a solid majority (60%) of middle-income Poles rated living in a country where the media can report the news without censorship as very important, but fewer than half (42%) of lower-income Poles held the same view.

Similarly, 64% of middle-class Venezuelans said freedom of the press is very important, while roughly half (49%) of less well-off Venezuelans expressed this view.

Both the relatively well-off and the less well-off generally embrace the principle of freedom of religion. Half or more among 11 of the 13 publics considered it very important to live in a country where you can practice your religion freely. Gaps between income groups were found in five countries, though they are somewhat smaller than the gaps on other questions regarding democratic principles and individual liberties.

In Russia, half of the middle class considered the freedom to practice their religion very important, while only 42% of the less affluent held the same view.

Freedom of Speech vs. Freedom from Hunger and Poverty

When asked to identify which of four alternatives was personally most important to them – being free to say what they want in public, being free to practice their religion, being free from hunger and poverty, or being free from crime and violence – respondents tended to put concerns about hunger and poverty at the top of the list. However, there were important differences between income groups – most notably, middle-class respondents were generally more likely to prioritize free speech than were their lower-income counterparts. 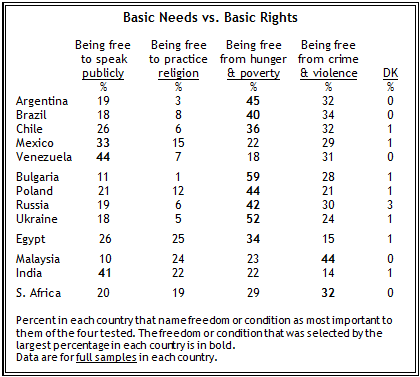 Overall, freedom from hunger and poverty was identified as most important by at least a plurality of respondents in eight of the 13 countries. The freedom to say what you want in public was named in three nations, while freedom from crime and violence was the top choice in two countries. In no country was being free to practice your religion selected as the top priority.

For example, middle class Poles were roughly twice as likely as the less affluent to classify free speech as being most important to them (29% vs. 15%). Few Bulgarians selected free speech, but it was more common among members of the middle class (17%) than among the lower-income group (6%).

Elsewhere, wealthier Egyptians were more likely to choose free speech than were less affluent citizens (31% vs. 23%). Differences of views between members of the middle- and lower-income groups were also found in Brazil, Russia, India, Chile, and South Africa. 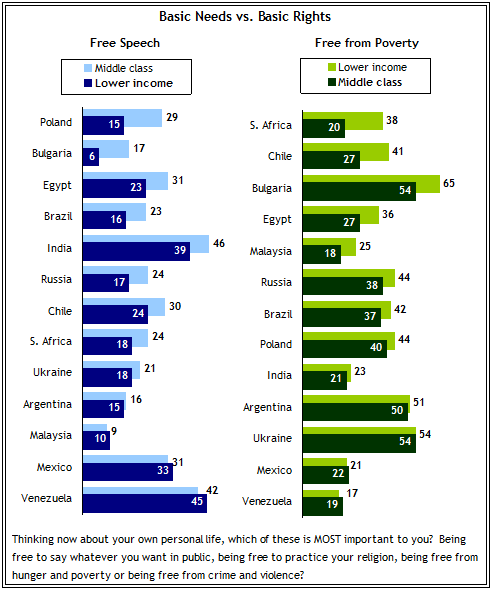 About four-in-ten (41%) among less affluent Chileans chose living without hunger and poverty, while just 27% of better-off Chileans concurred. Notable gaps were also found in Bulgaria, Egypt, Malaysia, Russia, and Brazil.

When confronted with a choice between a good democracy and a strong economy, members of the middle classes in many developing countries were more likely than the less affluent to favor a good democracy.

While roughly two-thirds (66%) of middle-class Chileans favored a good democracy over a strong economy, only 53% of the less prosperous held the same view. Similarly, 63% of better-off Argentines opted for democracy, compared with 57% of their less well-off compatriots.

In Eastern Europe, overall, fewer chose democracy over economic growth, though the middle classes were still generally more likely than others to do so. Roughly one-third of the middle classes in Poland (36%) and Bulgaria (31%), and 18% in Russia, picked democracy over the economy, while fewer did so among those with lower incomes in each of the three nations (27% in Poland, 19% in Bulgaria, 13% in Russia).

In India, the pattern is reversed: middle class respondents are less likely than those in the lower income group to favor a good democracy over strong economy. A solid majority (57%) of less wealthy Indians chose a good democracy, while just 49% of the middle class took this view.