In the midst of rapidly evolving global economic conditions – notably including a U.S. economic slowdown – people around the world are largely dissatisfied with the way things are going in their country and with their nation’s economic conditions: Majorities in most countries rate their national economic situation as bad and believe things will either worsen or stay the same over the next year. China and India are exceptions to these trends; publics in China and India are largely happy with their current economic situation and are very optimistic about their economic future.

Despite the negative views of current conditions, many feel that their personal economic situation is good and retain faith in a key component of globalization – international trade. Still, publics worldwide are uncomfortable with the idea of foreigners buying companies in their country. 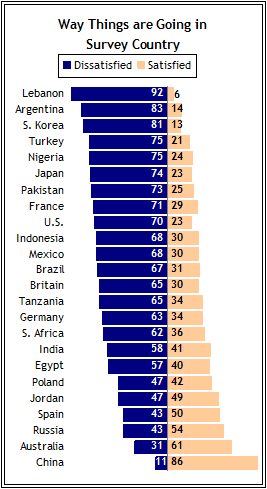 Majorities in 18 of 24 countries surveyed worldwide are dissatisfied with the way things are going in their country. Some publics are clearly more dissatisfied than others; in Lebanon, dissatisfaction is nearly universal (92% dissatisfied) while smaller but still clear majorities are dissatisfied in India (58%) and Egypt (57%).

Dissatisfaction with the general direction of one’s country is not new; Pew trend data shows it typically dominates the public mood in most countries. But, since 2007, dissatisfaction has increased dramatically in a number of countries, most notably Argentina; 83% of Argentines are currently dissatisfied, up from 54% in 2007.

Running counter to global opinion about national conditions, the vast majority of Chinese (86%) surveyed feel satisfied with their country’s direction. Roughly six-in-ten Australians (61%) are also satisfied while the Spanish and Russians are slightly more satisfied than not. 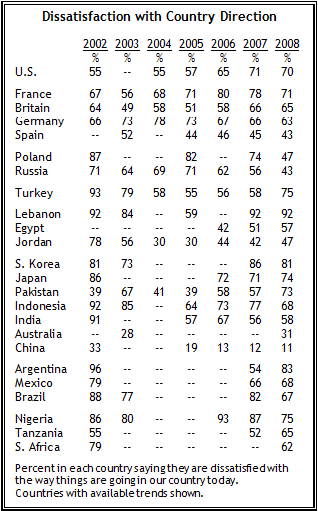 Positive gains in the public mood have been realized in the past year in seven of the 22 countries surveyed. In a few countries, dissatisfaction levels have decreased substantially (Poland, Brazil, Russia, and Nigeria). Most striking is the case of Poland: In 2007, three-in-four Poles were dissatisfied; by 2008, fewer than half were. 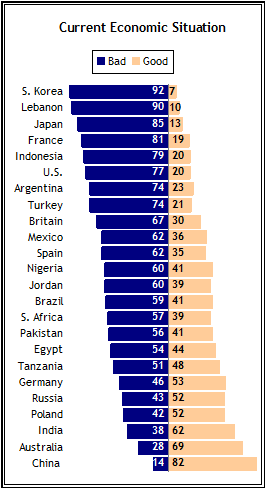 Not all publics view their national economic situation negatively. In fact, one-quarter of the countries surveyed view their country’s economy positively; many of these publics live in countries that have been experiencing strong economic growth. For example, in China, which has enjoyed high rates of growth in recent years, a large majority (82%) say their national economic situation is good. 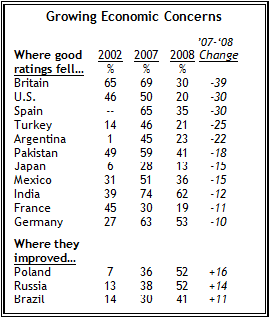 In several other countries the decline in “good” ratings marked a change from views being split or slightly “bad” overall, to overwhelmingly “bad.” In 2007, in the U.S., Turkey and Argentina, roughly half of those surveyed described the national economy as good; in 2008, only about one-fifth did. Less dramatic, but still substantial, drops in upbeat opinions occurred in Pakistan, Mexico and Japan.

While not as substantial, increases in positive views of one’s national economy have occurred among a few publics (Poland, Russia and Brazil). For Poland and Russia, the increases represent a change from views being negative to positive overall. In 2007, slightly more than one-third in both Poland and Russia held positive views of the national economy; in 2008, slightly more than half do so. In Brazil, the share of the public holding a positive view of the economy has increased from three-in-ten (30%) to about four-in-ten (41%). 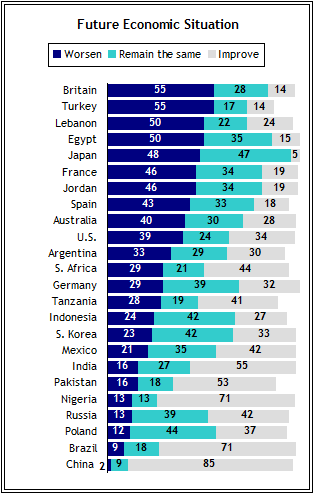 While many of the publics surveyed hold negative views of their current national economic situation and many are more negative than just one year ago, optimism about the economic future is not absent – in nine countries, majorities or pluralities think their nation’s economy will improve over the next 12 months. In 11 countries, majorities or pluralities say the economy will worsen, and in four countries the most common response is that it will remain the same.

When asked to consider the future economic situation in their countries, a strong majority of Chinese (85%), Brazilians (71%) and Nigerians (71%) say that they expect it to improve a lot or a little. Few in any of these three countries expect that conditions will worsen (China 2%, Brazil 9%, Nigeria 13%).

Majorities or pluralities in a number of other countries are also optimistic about their national economic futures (India, Pakistan, South Africa, Russia, Tanzania and Mexico).

The situation is substantially more pessimistic, however, in a number of countries. More than half in both Britain (55%) and Turkey (55%) anticipate that economic conditions will worsen in the next 12 months; few in either country (14%) expect things to get better.

Half of those surveyed in Lebanon and Egypt are pessimistic about the future of their national economies, along with pluralities in Japan, France, Jordan, Spain, Australia, the U.S. and Argentina. 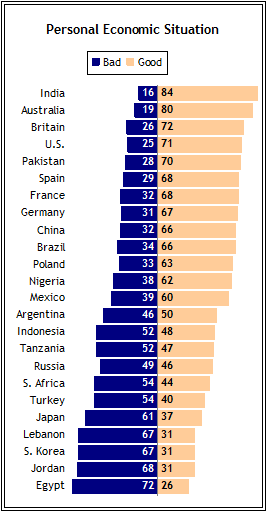 Majorities in 13 of the countries surveyed say that their personal economic situation is good, while majorities in only nine nations rate their situation as bad.

The most positive ratings are found in two countries where views of the national economy are also positive: India and Australia. Eight-in-ten or more in India (84%) and Australia (80%) rate their personal economic situation as good. 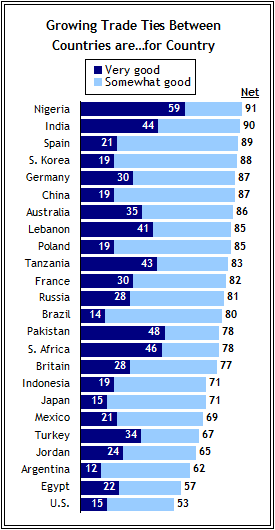 Positive assessments are much less common in the Middle East: relatively few in Egypt (26%), Jordan (31%), Lebanon (31%) or Turkey (40%) say their current situation is good. Poor ratings are also prevalent in the two wealthiest Asian nations included in the survey – only 31% of South Koreans and 37% of Japanese hold positive views of their personal economic situation.

Majorities in all 24 nations surveyed say increasing trade and economic integration is a good thing for their countries. In fact, enthusiasm for trade is pervasive in a number of countries and not just in nations such as China, where there is widespread satisfaction with the economy. By contrast, of the countries surveyed, the U.S. is the least supportive of trade.

While enthusiasm for trade is broad based, some publics are more convinced of its value than others. For example, an overwhelming majority of Nigerians (91%) say increased trade ties are either “very good” or “somewhat good,” with six-in-ten (59%) saying “very.” Large percentages of other publics also feel strongly about such ties; more than four-in-ten in Pakistan, South Africa, India, Tanzania and Lebanon say increased trade is “very good.” 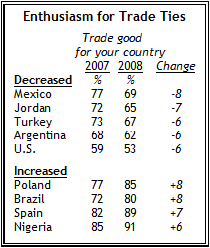 There have been few large shifts in views about international trade over the last year. Still, some publics have grown slightly more supportive of trade, including Poland, Spain, Brazil and Nigeria, while a few have become slightly less supportive, including Mexico, Jordan, Turkey, Argentina and the United States.

While views of trade ties have fluctuated some between 2002 and 2008, the period is marked more by decreases than increases in enthusiasm for trade, most notably among the U.S. public. 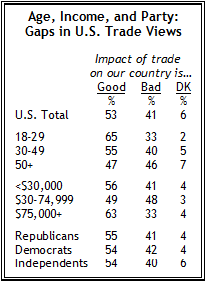 Among the 24 countries included in the survey, Americans are the least supportive of international trade – just 53% of Americans say trade with other countries is having a good effect on the U.S., down sharply from 2002, when 78% believed it was having a positive impact.

As in previous years, the American public’s views vary by age and income. More than six-in-ten (65%) of those younger than age 30, and 55% of those ages 30 to 49, believe that trade has a positive impact on the United States. By comparison, people ages 50 and older are more divided (47% good, 46% bad). Wealthier Americans are also slightly more likely to support international trade; roughly two-thirds (63%) of those with household incomes of $75,000 or more think it has a good impact, compared with 56% of those with incomes below $30,000.

Support for trade is basically the same among Republicans (55% good), independents (54%) and Democrats (54%). However, support has waned over the last year among both Republicans and independents. In 2007, nearly two-thirds of Republicans (64%) and independents (63%) said that trade was good for the U.S. while just over half of each group do now – a decrease of nine percentage points for both. Nearly equal percentages of Democrats held positive views of trade in 2007 (55%) as did in 2008 (54%). 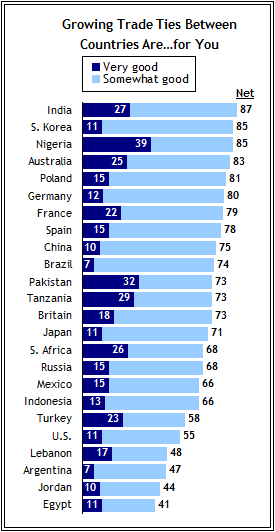 The Personal Impact of Trade

In all but four of the countries surveyed (Lebanon, Argentina, Jordan and Egypt), majorities say that increasing economic and trade ties between their country and other countries are good for themselves and their family. In fact, more than three-quarters of the publics view increasing trade ties as being positive for themselves and their families.

Enthusiasm for trade in relation to its impact on families is not, however, as fervent. Fewer among all of the publics feel that the personal impact of international trade is “very good.” 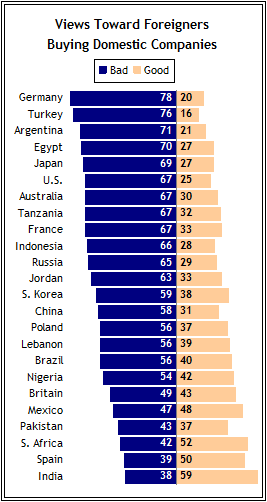 Overall, publics worldwide are skeptical of the value of foreigners buying domestically owned companies: Half or more in 18 of the 24 countries surveyed say that it is bad when foreigners buy domestically-owned companies. In several countries, this negative sentiment is particularly pervasive; seven-in-ten or more in Germany (78%), Turkey (76%), Argentina (71%) and Egypt (70%) say that foreign buying of domestic companies is bad.

Some publics are conflicted; publics in Pakistan, Britain and Mexico are closely or evenly divided on the merit of foreign ownership of domestic companies.

Positive views of foreign ownership are less pervasive but they do prevail in three countries: Half or more among the publics in India, Spain and South Africa say foreign buying of domestic companies is a good thing.

Next: Chapter 2. Views of the U.S.
← Prev Page
Page1You are reading page2Page3Page4Page5Page6Page7Page8Page9Page10
Next Page →