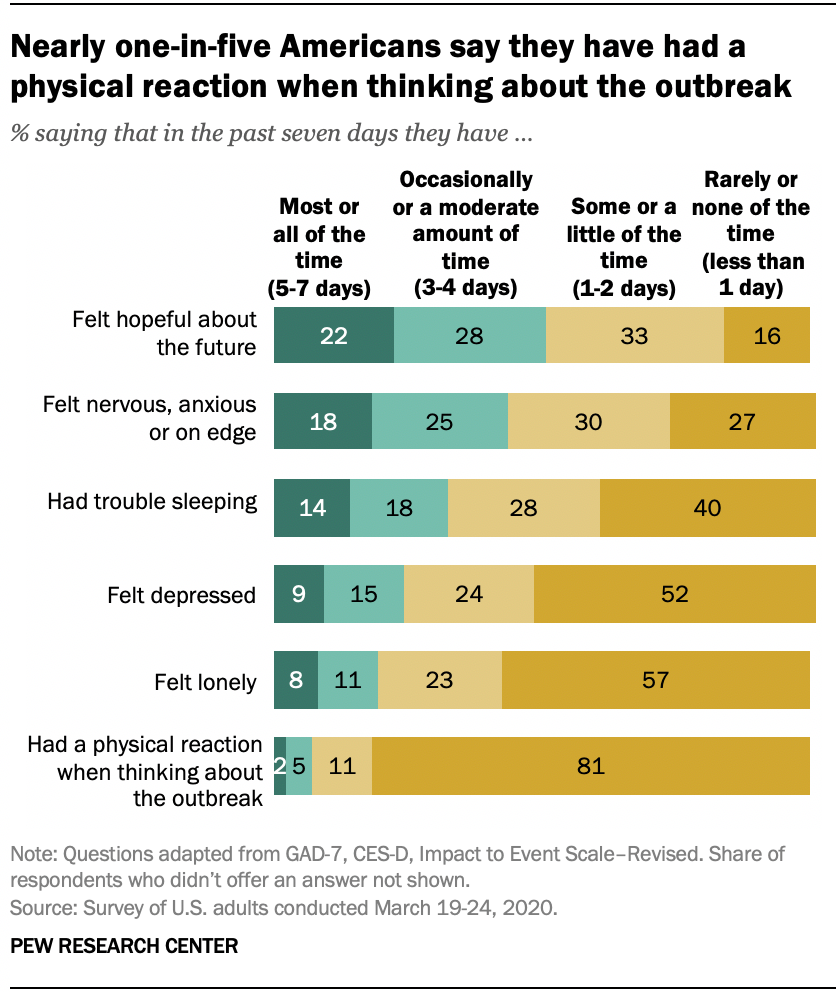 Health experts are concerned about the potential mental health effects of the coronavirus outbreak in the United States, and mental health hotlines report a substantial uptick in calls since the outbreak began. Nearly one-in-five U.S. adults (18%) say they have had a physical reaction at least some or a little of the time when thinking about the outbreak, according to a new Pew Research Center survey conducted March 19-24. This is particularly true of those affected financially.

When asked more broadly how they’ve felt in the past seven days, not in the context of the coronavirus outbreak, 18% report experiencing nervousness or anxiety most or all of the time during the past week. For context, a 2018 federal survey – which was not taken in the midst of a national crisis – found 9% of U.S. adults reported feeling nervous most or all of time over the past 30 days, indicating that the current level might be above normal. END_OF_DOCUMENT_TOKEN_TO_BE_REPLACED

END_OF_DOCUMENT_TOKEN_TO_BE_REPLACED

Nearly one-in-four U.S. workers – 38.1 million out of 157.5 million – are employed in the industries most likely to feel an immediate impact from the COVID-19 outbreak, according to a Pew Research Center analysis of government data. Among the most vulnerable are workers in retail trade (10% of all workers) and food services and drinking places (6%). In total, these two industries employ nearly 26 million Americans. END_OF_DOCUMENT_TOKEN_TO_BE_REPLACED

Doctors, nurses and other hospital staff around the country have raised concerns about a shortage of medical supplies during the COVID-19 pandemic. But the U.S. public is generally confident that hospitals and medical centers will be able to care for seriously ill people during the outbreak, according to a new Pew Research Center survey. 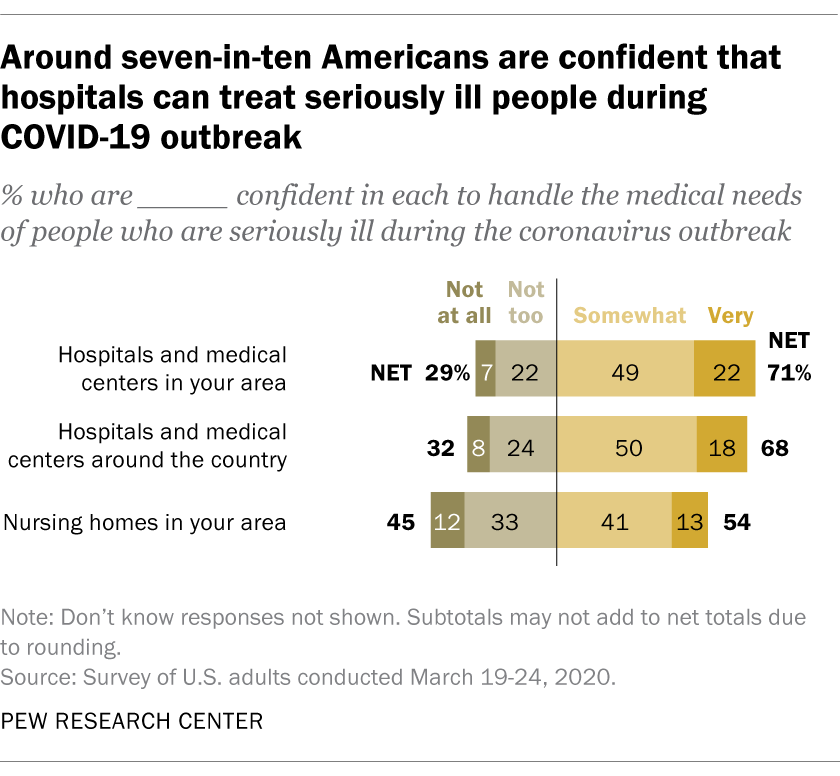 By comparison, a smaller share of Americans (54%) say they are very or somewhat confident that nursing homes in their area can handle the needs of seriously ill people during the outbreak. Nursing homes in more than half the states have reported coronavirus cases, according to federal data. (You can explore all survey data in this analysis and the accompanying report by using our interactive data tool.)

END_OF_DOCUMENT_TOKEN_TO_BE_REPLACED 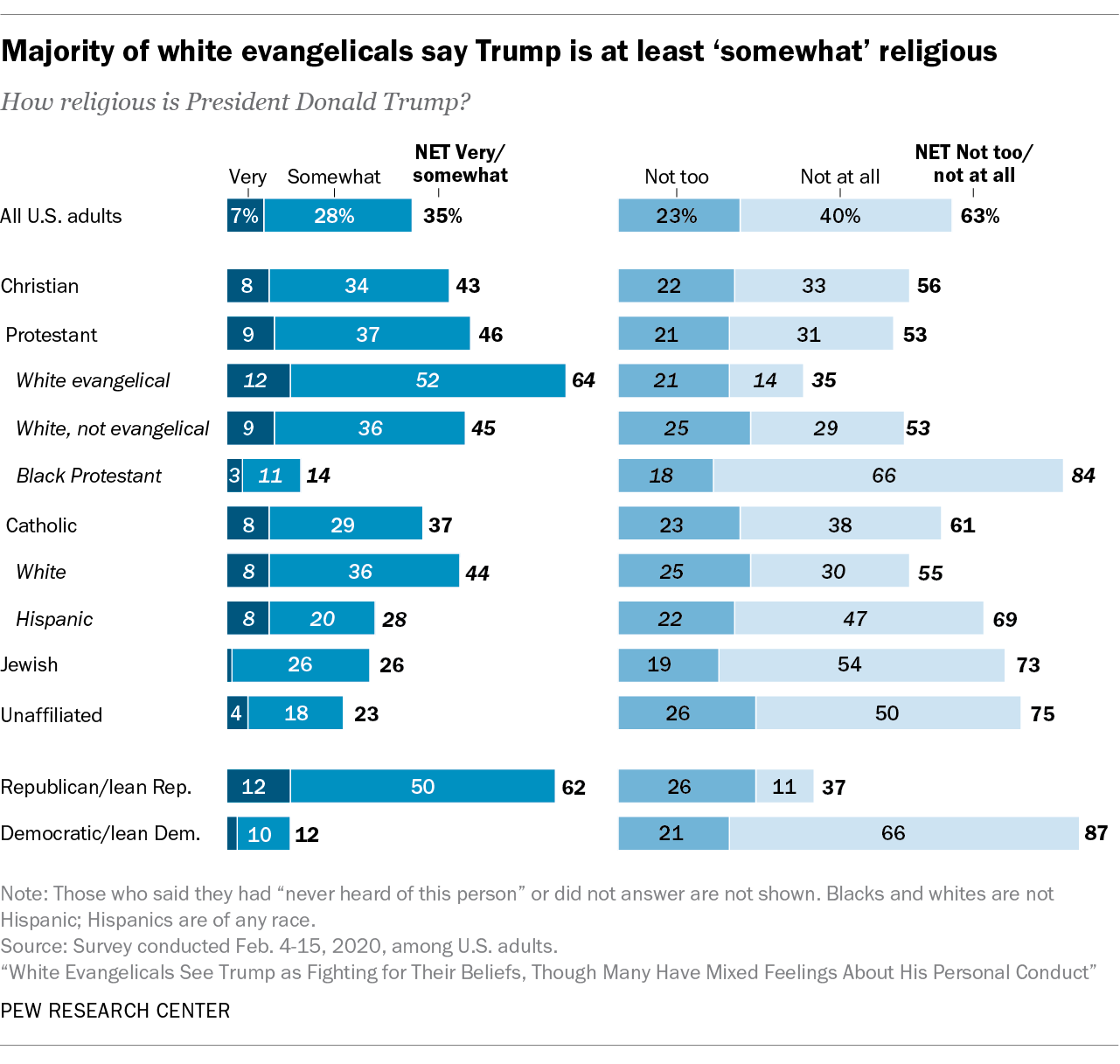 END_OF_DOCUMENT_TOKEN_TO_BE_REPLACED

Data from 2016, the latest available, provides key insights into the broad reach of stock market investment in the United States. While a relatively small share of American families (14%) are directly invested in individual stocks, a majority (52%) have some level of investment in the market. Most of this comes in the form of retirement accounts such as 401(k)s. END_OF_DOCUMENT_TOKEN_TO_BE_REPLACED

The spread of the coronavirus has the potential to hit many of the nation’s nearly 60 million Latinos particularly hard. Although the Latino unemployment rate dipped at the end of 2019 to a near record low, many Latinos work in the leisure, hospitality and other service industries – and they are less likely to have health insurance. Latinos were hit especially hard by the Great Recession more than a decade ago, and some workers have only recently seen their median personal incomes bounce back and exceed pre-recession levels. END_OF_DOCUMENT_TOKEN_TO_BE_REPLACED

Adults who have never been married or who are currently living with a partner are the most likely to say they have ever used an online dating service: 52% and 46%, respectively, say this. By comparison, 35% of Americans who are divorced, separated or widowed say they have ever used a dating site or app, while 16% of married adults say the same, according to a new analysis of a Pew Research Center survey conducted in October 2019. END_OF_DOCUMENT_TOKEN_TO_BE_REPLACED

For students, researchers and anyone else interested in global public opinion, here’s a quick introduction to the types of analyses you can do with the database. END_OF_DOCUMENT_TOKEN_TO_BE_REPLACED

But the green economy is also raising the demand for some mechanical skills, such as equipment maintenance and repairing, which have diminished in importance in recent decades as the number of U.S. manufacturing jobs declines. With its emphasis on the environment and the sustainable use of resources, the green economy has stimulated employment in existing engineering and production jobs, ranging from industrial engineers to electricians, which often call for mechanical proficiency. END_OF_DOCUMENT_TOKEN_TO_BE_REPLACED

Twitter RSS Archive
Defining generations: Where Millennials end and Generation Z begins
Nearly Half Expect To Have Difficulties Voting in 2020 Election
About One-in-Four U.S. Hispanics Have Heard of Latinx, but Just 3% Use It
Black voter turnout fell in 2016, even as a record number of Americans cast ballots
An examination of the 2016 electorate, based on validated voters