Roughly seven-in-ten white evangelical Protestants (72%) say they approve of the way Trump is handling his job, according to a Pew Research Center survey conducted June 16 to 22. That is a 6 percentage point drop from 78% recorded in April, in line with the 5-point drop during that period among U.S. adults overall. The share of white evangelicals who say they “very strongly” approve of Trump’s performance is now at 59%, down 8 points from 67% in April. (Pew Research Center also asked the presidential approval question in March of this year, at which time Trump’s rating was similar to results obtained in April.)

This analysis explores U.S. religious groups’ assessments of President Trump’s performance in office and how adherents from each group view a potential Biden presidency. We surveyed 4,708 U.S. adults from June 16 to 22, 2020. Everyone who took part is a member of Pew Research Center’s American Trends Panel (ATP), an online survey panel that is recruited through national, random sampling of residential addresses. This way nearly all U.S. adults have a chance of selection. The survey is weighted to be representative of the U.S. adult population by gender, race, ethnicity, partisan affiliation, education and other categories. Read more about the ATP’s methodology. 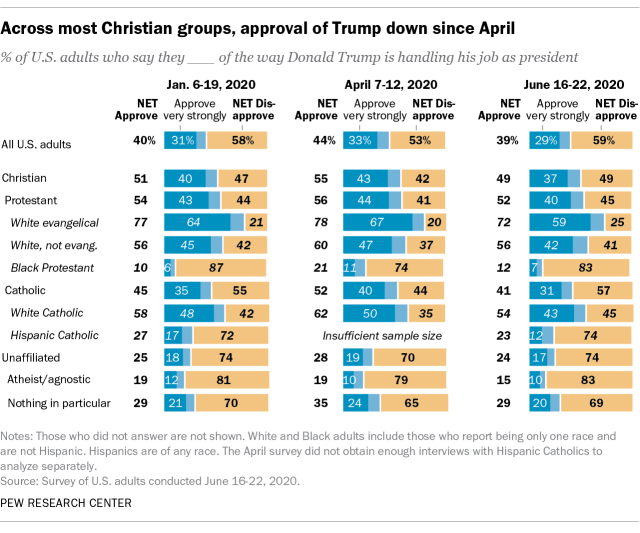 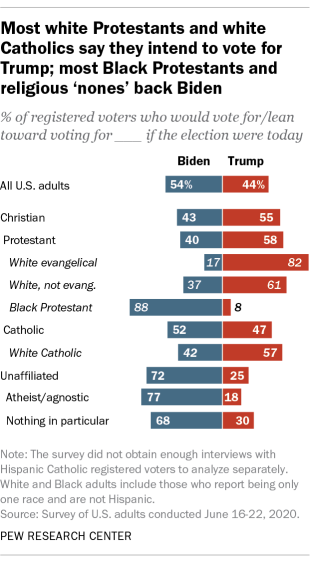 The same survey finds that if the 2020 presidential election were held today, 82% of white evangelical Protestant registered voters would vote for Trump or lean toward voting for him, while 17% say they would back the Democratic Party’s presumptive nominee, Joe Biden. By comparison, a Pew Research Center survey that was conducted just after the 2016 presidential election among those who were identified as having voted found that 77% of white evangelical Protestant voters backed Trump, while 16% voted for Hillary Clinton.

The June survey was conducted after Trump’s controversial visit to St. John’s Episcopal Church on June 1, and in the immediate wake of the Supreme Court’s landmark LGBTQ ruling on June 15. A Trump appointee, Neil Gorsuch, wrote the majority opinion that gay, lesbian and transgender employees are protected under existing nondiscrimination laws.

Trump’s continued support among white evangelical Protestants – a group that is highly religious and overwhelmingly Republican – is matched by their dislike of Biden. A large majority of white evangelical Protestants say Biden would make a “poor” (26%) or even “terrible” (49%) president, while 16% say he would make an “average” president. Only 9% of white evangelicals say Biden would be “great” (2%) or “good” (7%) in the Oval Office, compared with seven-in-ten who say Trump has been good (34%) or great (35%) in that role.

While no other religious group is as supportive of Trump as white evangelical Protestants – and his rating has slipped among most Christian groups in this analysis in recent months – the president continues to garner support from half or more of other white Christians. More than half of white Protestants who do not identify as evangelical (56%) say they approve of the job Trump is doing, as do 54% of white Catholics – and roughly six-in-ten voters in these groups say they would vote for him if the election were held today. Again, Biden does not instill confidence in many of these white Christians; just one-in-five white Protestants who are not evangelical (19%) and white Catholics (21%) say that Biden would make a good or great president.

Among religiously unaffiliated Americans, another strongly Democratic constituency, opinions on a possible Biden presidency are more tepid. (The religiously unaffiliated, also known as “nones,” are those who describe their religion as atheist, agnostic or “nothing in particular.”) Fewer than a third of “nones” (27%) say Biden would be a good or great president, while 39% say he would be average and 33% say he would do a poor or terrible job. Nevertheless, this group’s views toward Biden are much more positive than toward Trump: Seven-in-ten “nones” say Trump has been a poor (13%) or terrible (56%) president, and a similar share of unaffiliated voters (72%) say they would vote for Biden if the election was today. 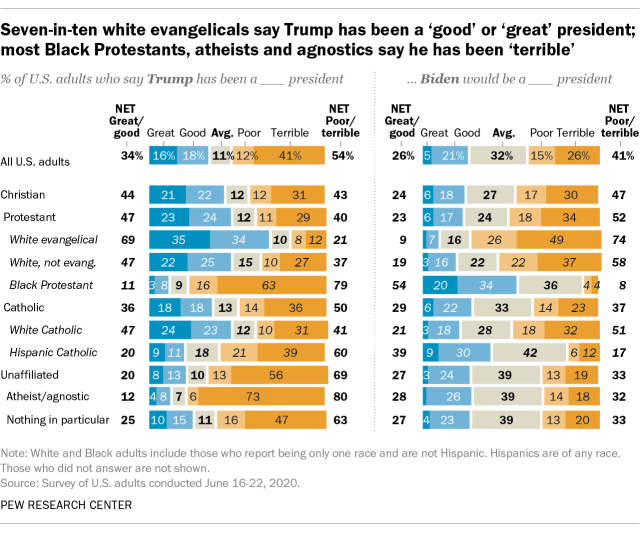