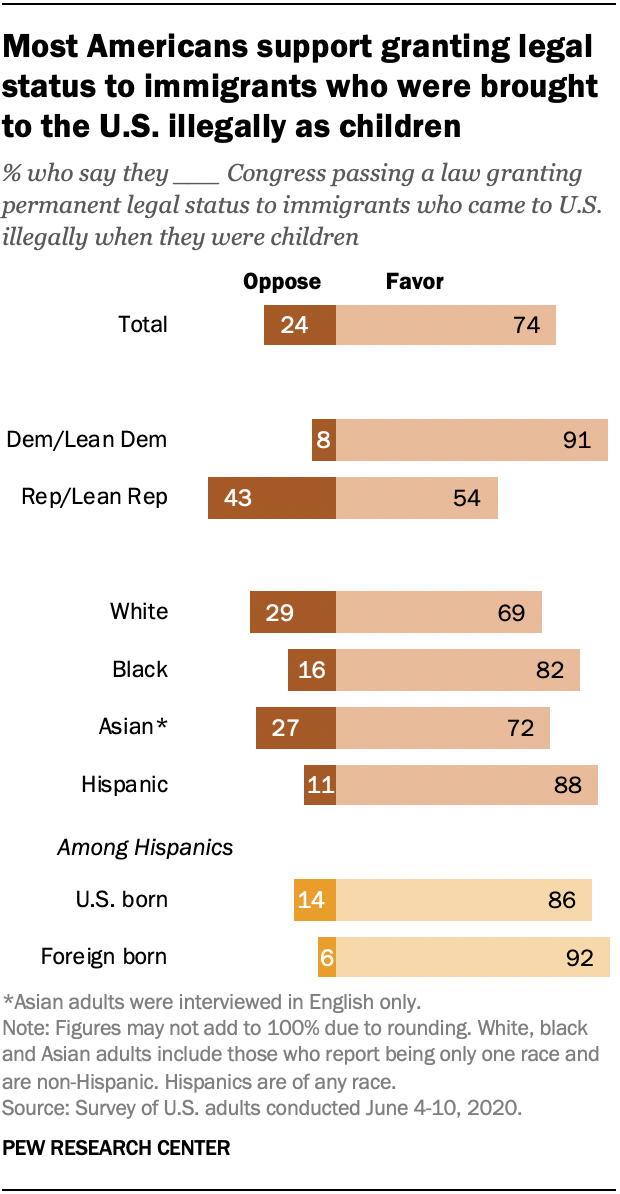 About three-quarters of U.S. adults say they favor granting permanent legal status to immigrants who came illegally to the United States when they were children, with the strongest support coming from Democrats and Hispanics, according to a Pew Research Center survey conducted June 4-10, 2020.

Support also varies by race and ethnicity. About nine-in-ten Hispanics (88%) say they favor granting legal status to immigrants who came to the U.S. illegally as children, with similar shares of U.S.-born and immigrant Hispanics saying so. Smaller majorities of black (82%), Asian American (72%) and white (69%) adults say the same.

To examine the public’s attitudes on whether undocumented immigrants should be allowed to stay in the U.S. legally, we surveyed 9,654 U.S. adults from June 4 to 10, 2020. Everyone who took part is a member of Pew Research Center’s American Trends Panel (ATP), an online survey panel that is recruited through national, random sampling of residential addresses. This way nearly all U.S. adults have a chance of selection. The survey is weighted to be representative of the U.S. adult population by gender, race, ethnicity, partisan affiliation, education and other categories. Read more about the ATP’s methodology. Here are the questions asked for this report, along with responses, and its methodology.

A closer look at DACA enrollees

As of the end of 2019, about 649,000 immigrants have work permits and protection from deportation under DACA. To qualify for the program, enrollees must have met a variety of conditions, such as entering the U.S. before their 16th birthday and not being convicted of certain crimes.

Nearly all DACA recipients (about 96%) were born in the Latin America and Caribbean region, according to an analysis of data from the Department of Homeland Security. Mexico (521,440) was by far the top birth country, followed by El Salvador (25,050), Guatemala (16,970) and Honduras (15,570). After Latin America and the Caribbean, the next-largest share of DACA enrollees came from Asia (3%). The top Asian countries of origin included South Korea (6,280), Philippines (3,320) and India (2,290). 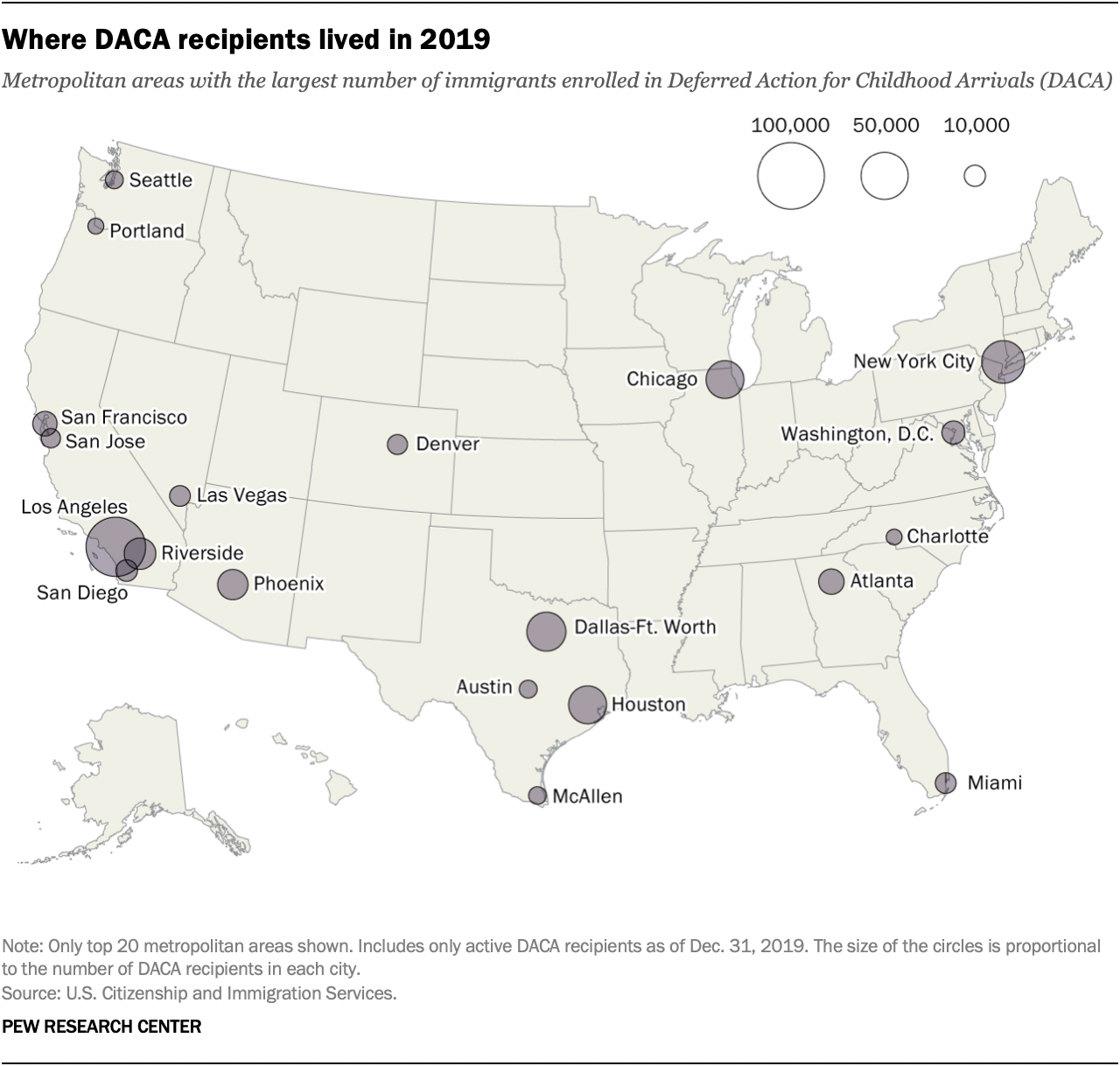 About six-in-ten DACA enrollees live in just 20 U.S. metropolitan areas. The Los Angeles-Long Beach-Anaheim area (80,540) has the most DACA recipients, nearly twice as many as in the New York-Newark-Jersey City metro area (41,800). The next largest metro areas for DACA recipients are Dallas-Fort Worth-Arlington (34,980), Houston-The Woodlands-Sugar Land (32,790) and Chicago-Naperville-Elgin (32,550).

Demographically, women slightly outnumber men among DACA recipients (53% vs. 47%). Meanwhile, the average age of a DACA recipient is 26; about two-thirds of enrollees (67%) are between the ages of 21 and 30.

In the Center’s new survey, Americans also express support for finding a way for all undocumented immigrants – not just those brought to the country as children – to stay in the U.S. legally. 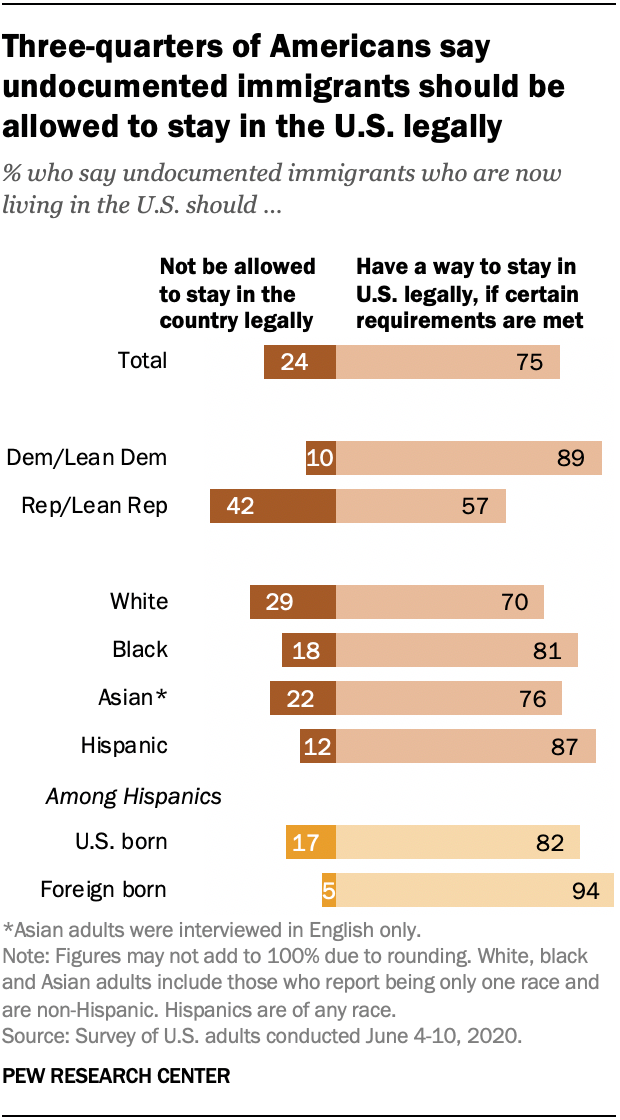 Overall, three-quarters of adults say there should be a way for undocumented immigrants living in the U.S. to stay in the country legally if certain conditions are met. Majorities in both party coalitions express support, but Democrats are again much more likely than Republicans to do so (89% vs. 57%). These views are little changed from August 2019.

The number of undocumented, or unauthorized, immigrants living in the U.S. stood at 10.5 million in 2017, down from a peak of 12.2 million in 2007, according to Pew Research Center estimates. Just under half of the nation’s unauthorized immigrants are from Mexico.

Public backs legal status for immigrants brought to U.S. illegally as children, but not a bigger border wall
In 2018, Americans broadly supported legal status for immigrants brought to the U.S. illegally as children
Path to legal status for the unauthorized is top immigration policy goal for Hispanics in U.S.
On immigration, Republicans favor path to legal status, but differ over citizenship
What Americans want to do about illegal immigration
Social Media Use in 2021
What the data says about gun deaths in the U.S.
Defining generations: Where Millennials end and Generation Z begins
Key facts about U.S. immigration policies and Biden’s proposed changes
Views on Race in America