The rise in the number of unemployed workers due to COVID-19 is substantially greater than the increase due to the Great Recession, when the number unemployed increased by 8.8 million from the end of 2007 to the beginning of 2010. The Great Recession, which officially lasted from December 2007 to June 2009, pushed the unemployment rate to a peak of 10.6% in January 2010, considerably less than the rate currently, according to a new Pew Research Center analysis of government data.

Most estimates of the unemployment rate in this report are from the U.S. Bureau of Labor Statistics, based on its survey of households, the Current Population Survey (CPS). The CPS is the government’s official source for monthly estimates of unemployment. Additional estimates, specifically those for racial, ethnic and nativity groups in the Great Recession, are based on the analysis of CPS data by Pew Research Center. Most estimates for the Great Recession period are adjusted to account for the effects of annual revisions to the CPS. All estimates are nonseasonally adjusted because seasonal adjustment factors are not available for many of the demographic groups included in this report.

The COVID-19 outbreak has affected data collection efforts by the U.S. government in its surveys, especially limiting in-person data collection. This resulted in about a 10 percentage point decrease in the response rate for the CPS in March and April 2020 and an even greater decrease in May 2020. It is possible that some measures of unemployment and its demographic composition are affected by these changes in data collection.

The unemployment rate in May might have been as high as 16%, by the U.S. government’s estimate. But it is not recorded as such because of measurement challenges that have arisen amid the coronavirus outbreak. Also, a sharp decline in labor force participation among U.S. workers overall may be adding to the understatement of unemployment. In May, 9 million Americans not in the labor force were in want of a job compared with 5 million in February, per government estimates. But these workers are not included in the official measure of unemployment. Thus, the COVID-19 recession is comparable more to the Great Depression of the 1930s, when the unemployment rate is estimated to have reached 25%. 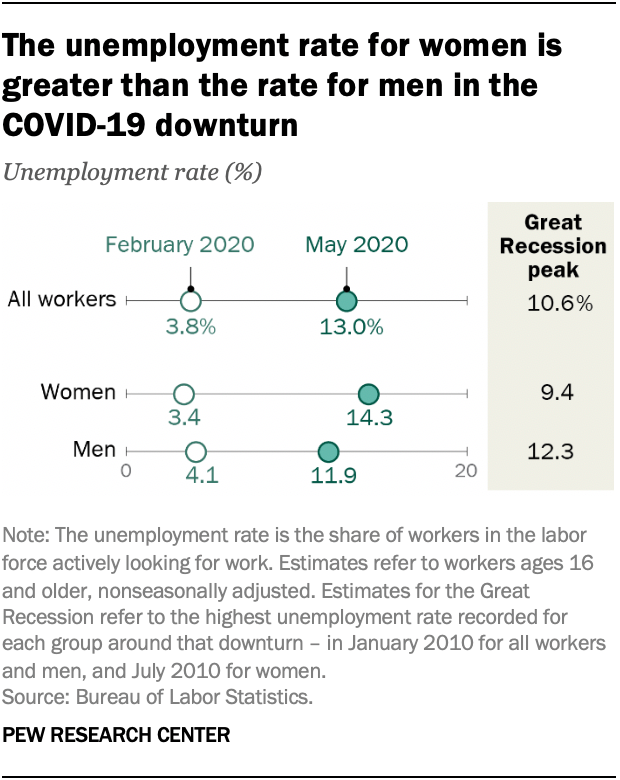 One reason women have seen a greater rise in unemployment in the current downturn is that they accounted for the majority of workers on the payrolls of businesses in the leisure and hospitality sector and educational services sector in February. Employment in these two sectors fell by 39% and 15% from February to May, respectively, leading most other sectors by a wide margin. By contrast, job losses in the Great Recession arose primarily from the construction and manufacturing sectors, where women have a much lighter footprint than men.

2The unemployment rate for black men in May (15.8%) was substantially less than the peak rate they faced in the Great Recession (21.2%). Black men are the only group among those examined in this analysis for whom such a notable gap exists. The reasons for this are not entirely clear but are likely rooted in the occupation and industry distributions of black men. Recessions in which the turmoil is centered in goods-producing sectors, such as the Great Recession, appear to take a greater toll on the job prospects of black men. The unemployment rate for black men previously topped 20% in the twin recessions of the early 1980s, when manufacturing employment also took a sharp dive. 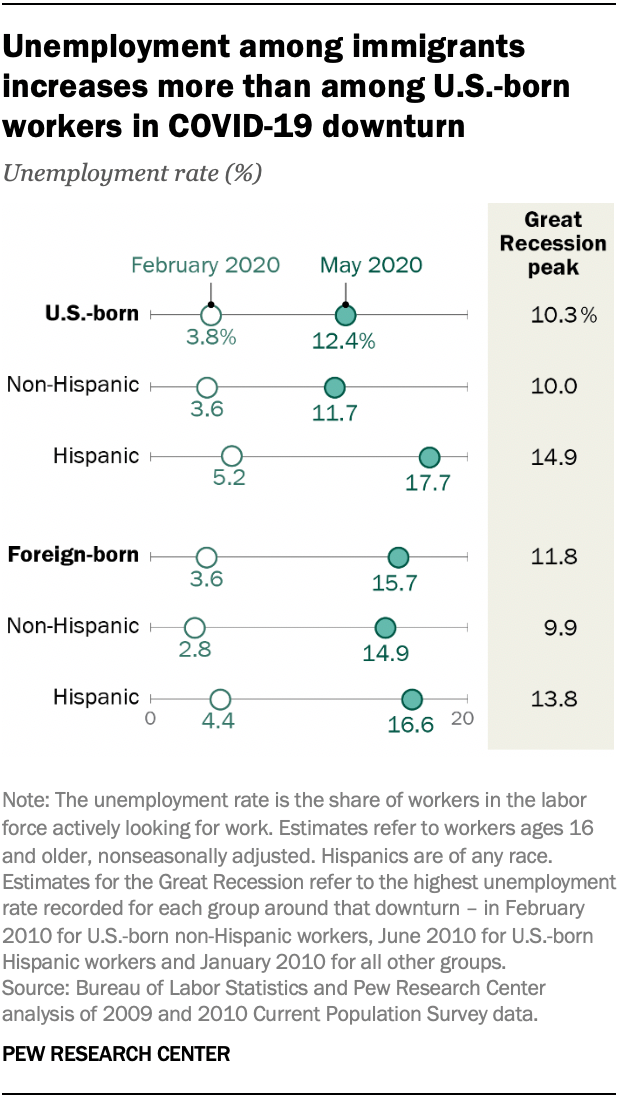 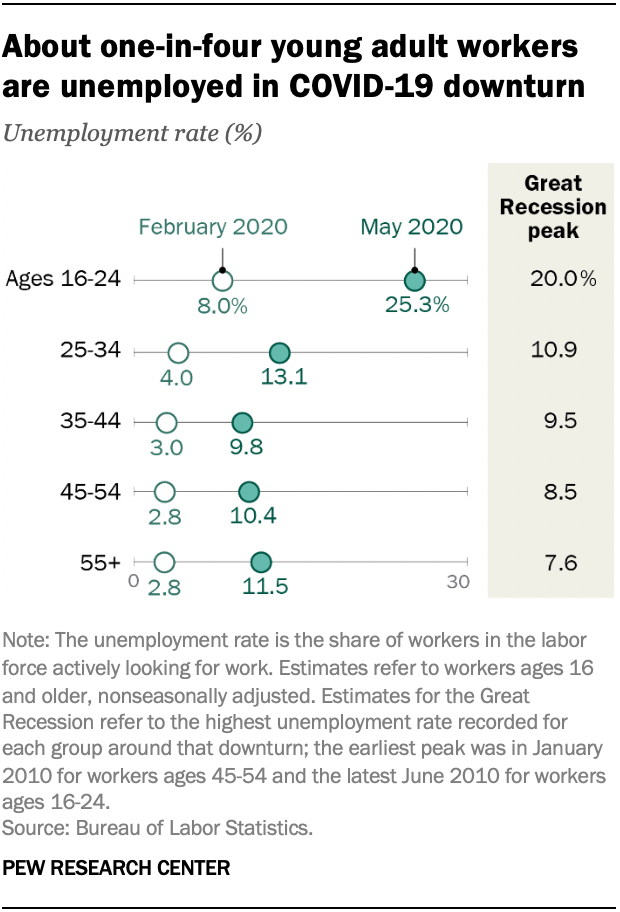 4Workers in all but one age group saw their unemployment rate climb into the double digits in May due to the COVID-19 outbreak, unlike the Great Recession when this was true only for younger workers. The unemployment rate among young adults ages 16 to 24 (25.3%) exceeded the rate among other workers by a substantial margin in May, more than double the rate among workers 35 and older. A key reason is the concentration of young adults in higher-risk industries, such as food services and drinking places, that were more affected by the need for social distancing and government mandated shutdowns. 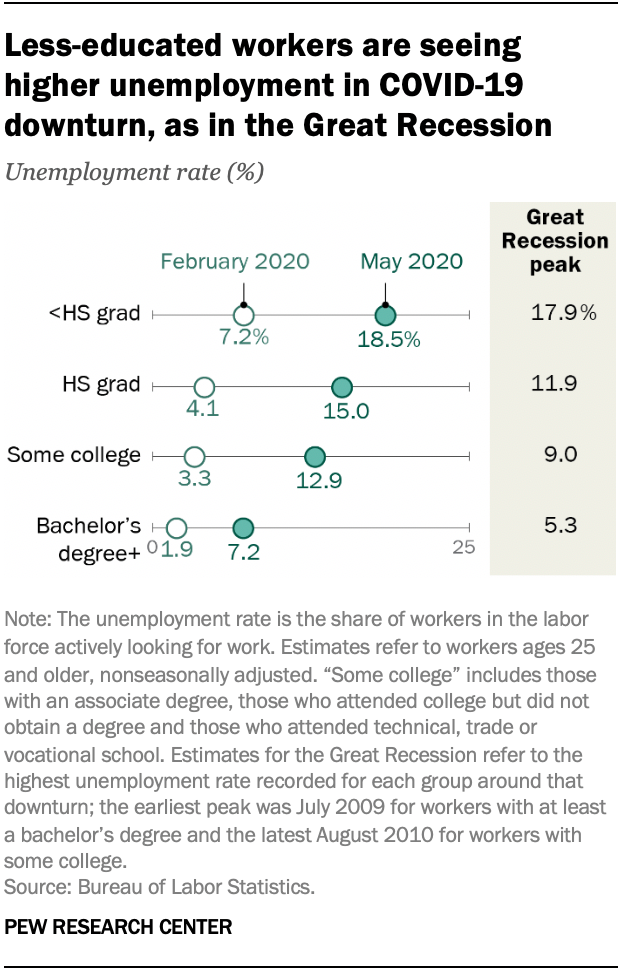 A unique factor in the COVID-19 recession is the significance of teleworking in keeping people on the job. The option to telework varied considerably across workers in February depending on their education level, with those with a college degree six times as likely to have the option as those without a high school diploma, 62% vs. 9%. Nonetheless, the May unemployment rate among college graduates was nearly four times that of February.