Many Americans are anticipating changes in the global balance of power and the importance of international cooperation even as the coronavirus outbreak continues to rage across the United States and around the world, according to three recent Pew Research Center surveys. Americans are divided in their outlooks, mainly along ideological lines, but are more united on opinions relating to China’s place in the world.

Here are four key findings on how Americans view the reshaping of international relations from surveys of U.S. adults conducted from March to May 2020.

Over the past few months, Pew Research Center has conducted three different polls asking Americans about their views on the global balance of power, international cooperation and the impact of the coronavirus outbreak on the future of world affairs. This analysis draws on the findings of all three of these surveys. The first was a nationally representative survey of 1,000 U.S. adults via telephone from March 3 to 29, 2020. The second was conducted via telephone among 1,008 adults from April 21 to 26, 2020. It was conducted in partnership with in partnership with Körber-Stiftung, which conducted a similar survey in Germany. The third was conducted April 29 to May 5 among 10,957 U.S. adults via the Center’s American Trends Panel (ATP), an online survey panel that is recruited through national, random sampling of residential addresses. This way nearly all U.S. adults have a chance of selection. Read more about the ATP’s methodology. All three surveys are weighted to be representative of the U.S. adult population by gender, race, education and other categories. 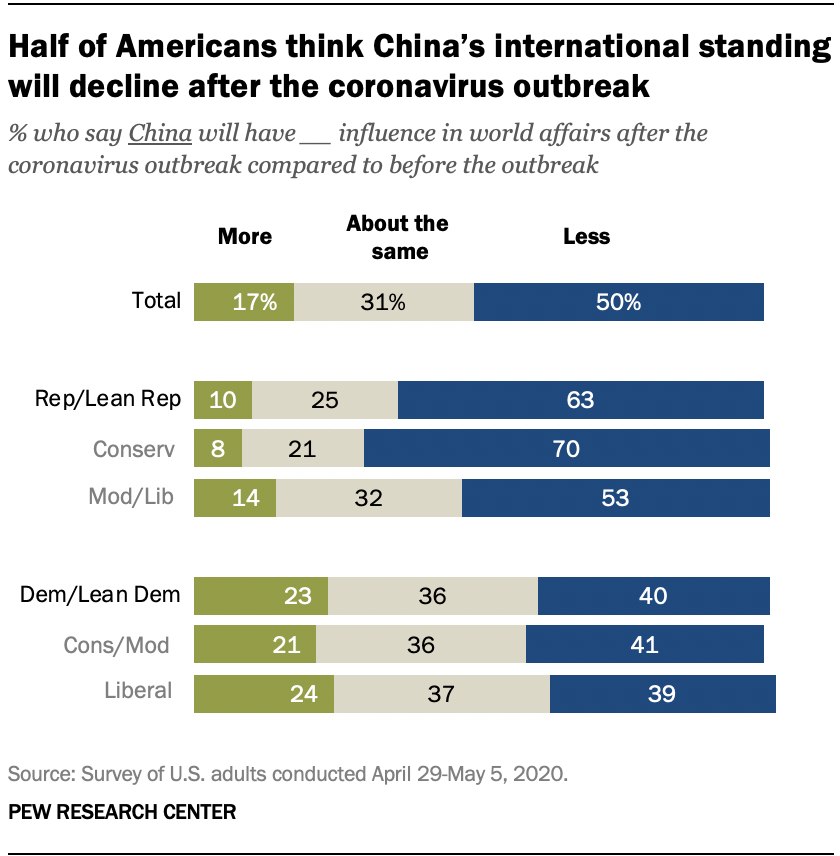 1Half of Americans expect China’s global influence to wane after the pandemic. China’s response to the virus has been met with disapproval by many Americans, half of whom believe the country’s international reputation will take a hit as a result of the virus. About a third (31%) of Americans think China’s influence will remain the same, and roughly a fifth (17%) expect it will grow.

A sizable majority of Republicans and Republican-leaning independents think Chinese influence will be negatively impacted by the pandemic, compared with only four-in-ten Democrats and independents who lean toward the party.

On the other hand, Democrats are about twice as likely as Republicans to expect China’s power to increase after the outbreak. 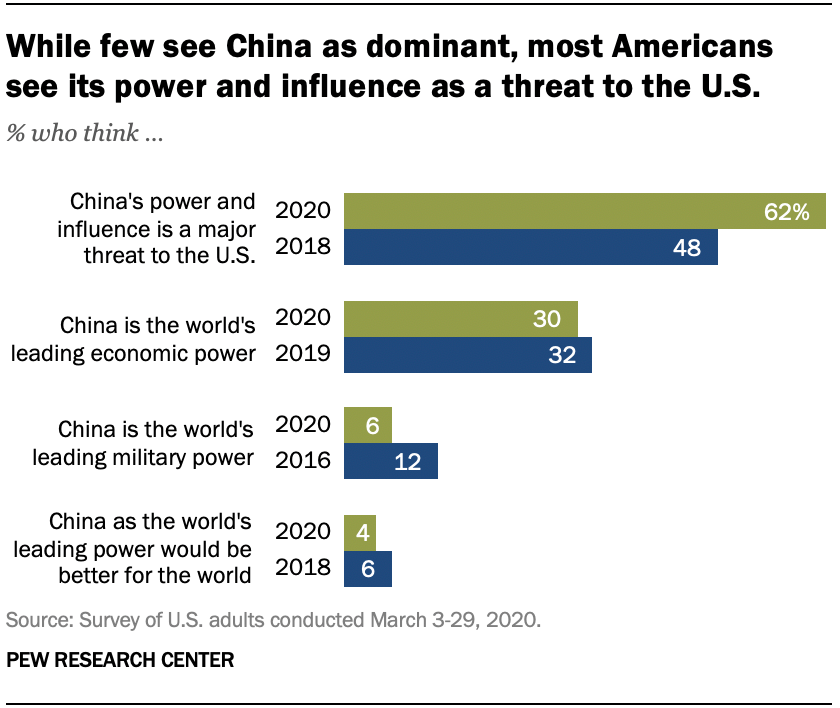 Americans’ perceptions of China’s military strength relative to other major military powers have also fallen. Just 6% of Americans now view China as the world’s top military power – down from 12% in 2016 – though three-in-ten still see China as the leading economic power. And only 4% of Americans think a situation in which China is the world’s leading power would be better for the world than one in which the U.S. is dominant.

Still, many Americans see Chinese power and influence as a major threat to the U.S. That share has climbed 14 percentage points since 2018. 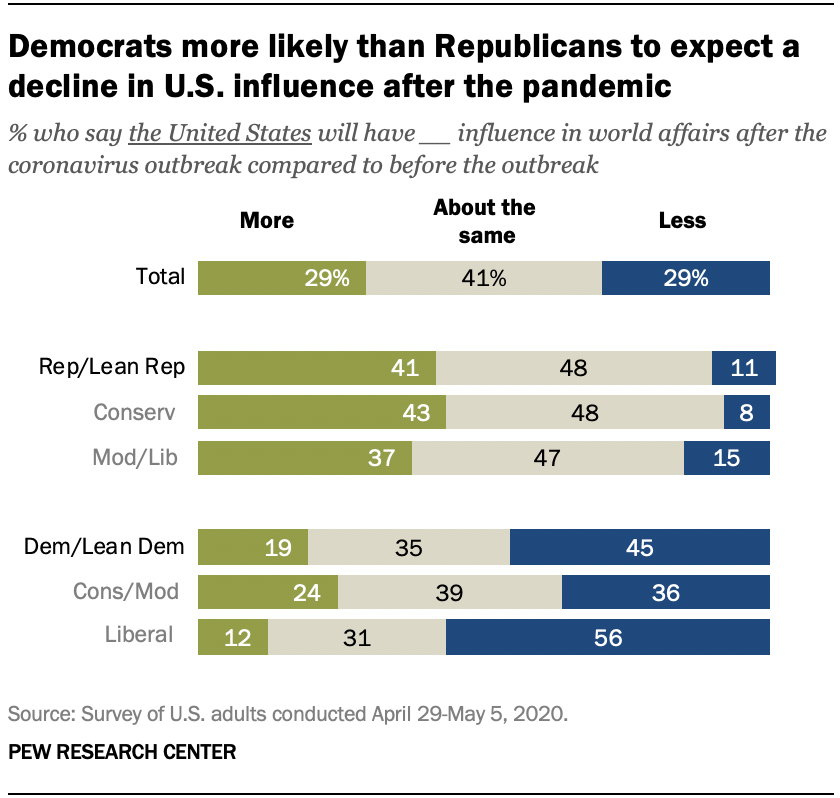 2Many Americans say the outbreak will have no impact on their country’s international standing. The largest share of Americans (41%) expect U.S. influence in world affairs to be about the same after the coronavirus outbreak compared to beforehand. The rest are evenly split, with 29% saying the U.S. will have more influence and less influence, respectively.

Meanwhile, a clear majority of liberal Democrats think the U.S. will emerge from the pandemic with its international reputation diminished. 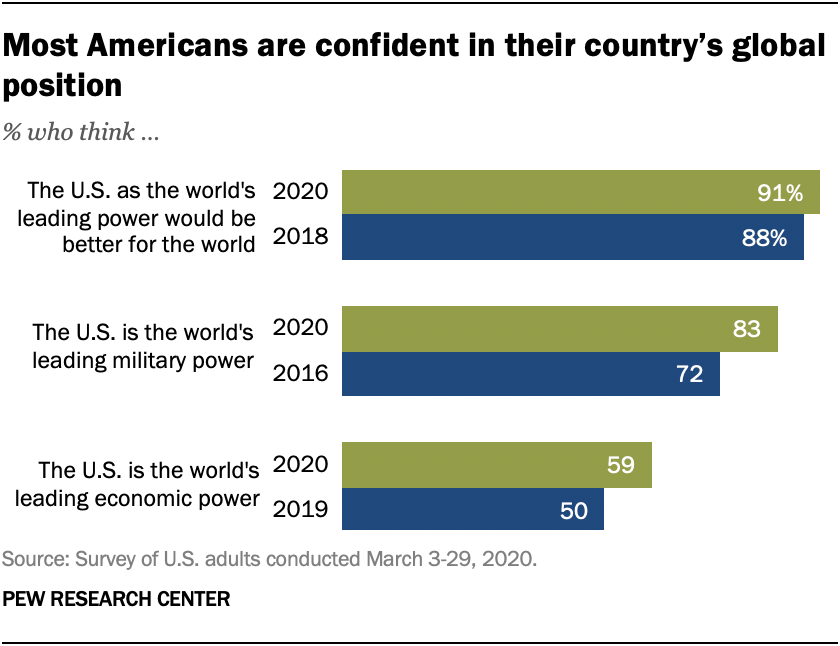 Despite relatively few Americans expecting an expansion of U.S. influence after the pandemic, this year has seen a marked increase in the shares that see the U.S. as a top power, both economically and militarily. About six-in-ten Americans think their country has the world’s strongest economy, increasing from only half in 2019. Similarly, about eight-in-ten think the U.S. is the world’s leading military power, an increase from 72% in 2016. In addition, an overwhelming majority of Americans agree that the world would be better off with the U.S. as the leading power, rather than China. 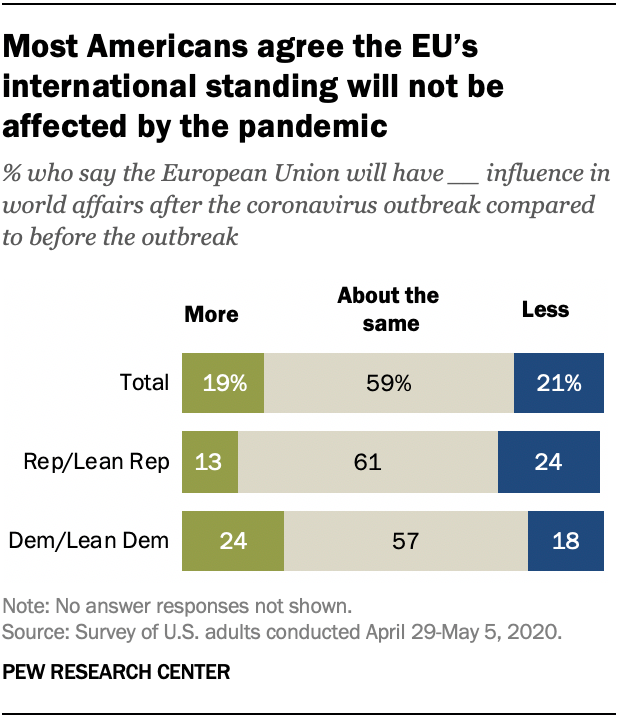 Currently, only 4% of Americans consider the EU the world’s dominant economy. 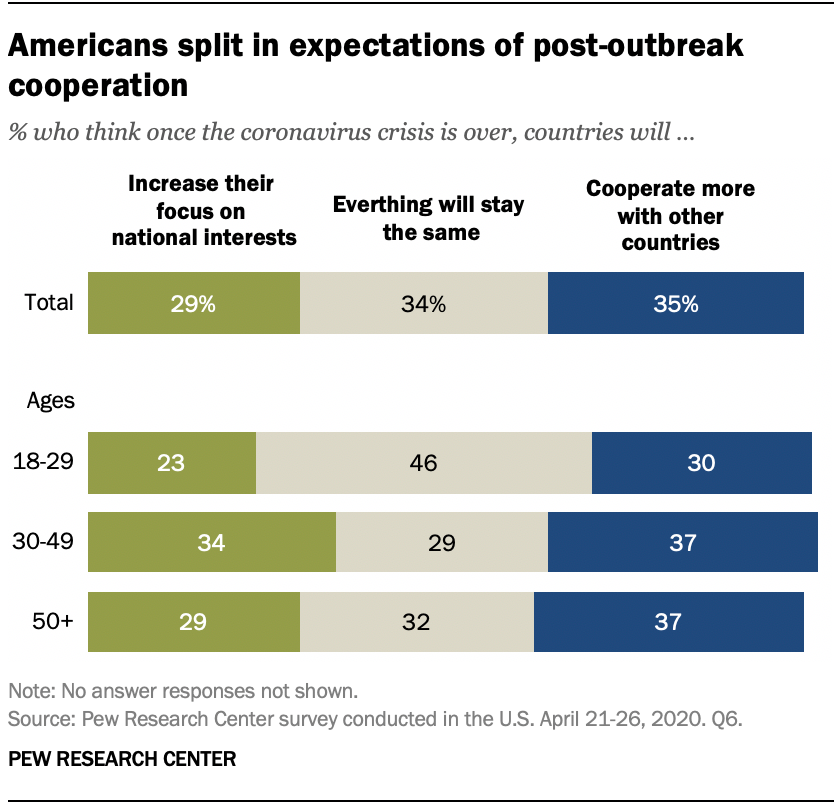 While Americans are largely split on whether they think the outbreak will result in enhanced global cooperation, most agree that cooperation is a priority for their country. About six-in-ten (62%) think many of the problems facing the U.S. can be solved by working with other countries. Similarly, 61% think the U.S. should consider the interests of other countries rather than following its own interests alone.

Adults under 30 are more likely than older adults to expect no changes in international cooperation to result from the outbreak – 46% of Americans ages 18 to 29 think the status quo will be maintained, compared with only about a third of 30- to 49-year-olds and those 50 and older.