China’s reputation among Americans had already fallen to an all-time low in Pew Research Center polling as of March, with roughly two-thirds viewing the country unfavorably. Now, a survey conducted April 29 to May 5 finds that Americans expect China’s international reputation will suffer because of how the country has handled the coronavirus outbreak, which originated within its borders. Americans are also critical of how China has handled the global pandemic and are skeptical of information from the Chinese government.

Here are five key findings about views of China and the COVID-19 outbreak, drawn from U.S. surveys conducted during the first months of the crisis.

Pew Research Center has tracked U.S. public opinion on China since 2005. This post was written to chart the views of Americans on China’s handling of the COVID-19 outbreak. This report draws on two surveys. The first was conducted via a nationally representative survey of 1,000 U.S. adults via telephone from March 3 to 29, 2020. The second was conducted April 29 to May 5 among 10,957 U.S. adults via the Center’s American Trends Panel (ATP), an online survey panel that is recruited through national, random sampling of residential addresses. This way nearly all U.S. adults have a chance of selection. Both surveys are weighted to be representative of the U.S. adult population by gender, race, ethnicity, partisan affiliation, education and other categories. Read more about the ATP’s methodology. 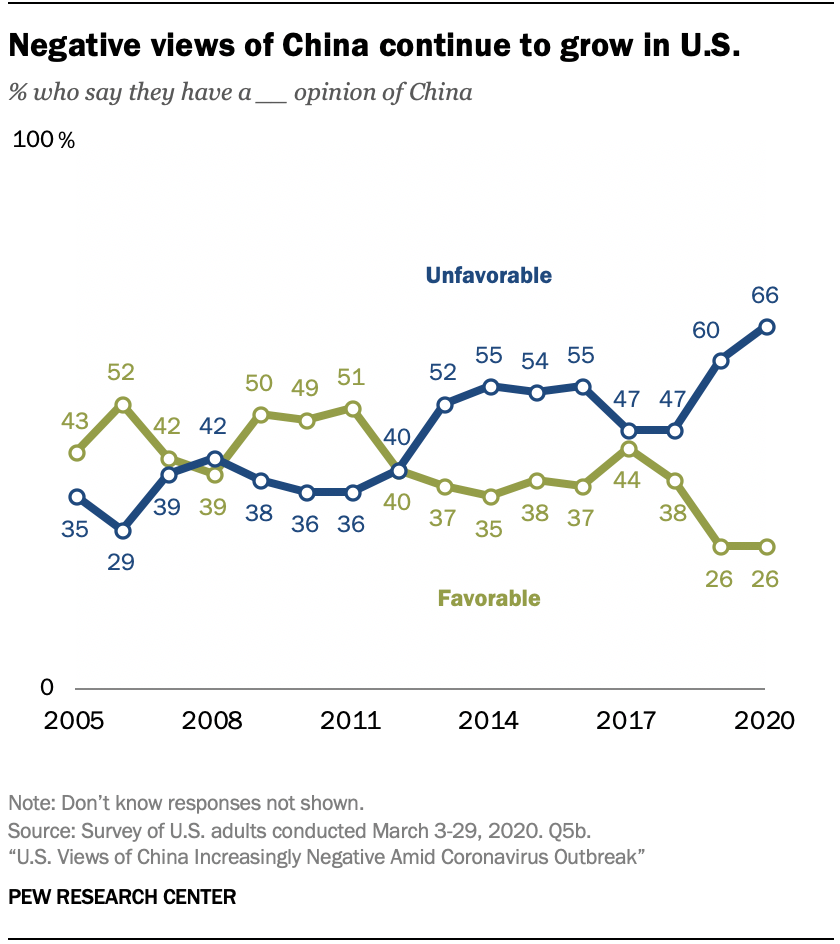 1Unfavorable opinion of China in the U.S. has reached its highest point since Pew Research Center began polling on this topic in 2005. About two-thirds (66%) of U.S. adults said in a March survey they had a negative view of the country – up nearly 20 percentage points since the beginning of the Trump administration. Roughly seven-in-ten Americans (71%) also say they do not have confidence in Chinese President Xi Jinping to do the right thing when it comes to world affairs – a high since the Center first asked the question in 2014.

2Americans are very critical of the way China has handled the coronavirus outbreak. Nearly two-thirds of Americans say China has not handled the global pandemic well, rating its performance as the worst (alongside Italy) among the six countries asked about in the April and May survey. And more give China the lowest possible rating – poor – for its dealings with the coronavirus than they do any other country (37%, compared with 27% who said the same of Italy). 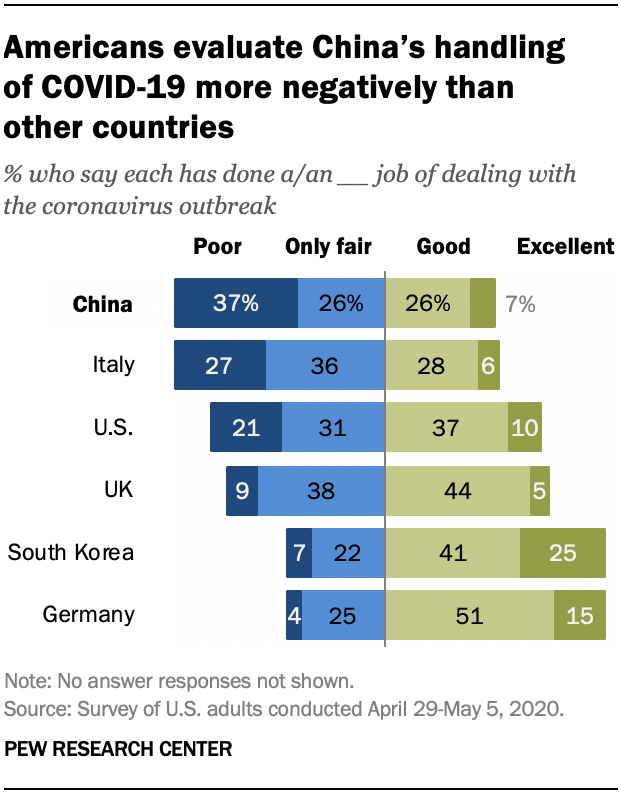 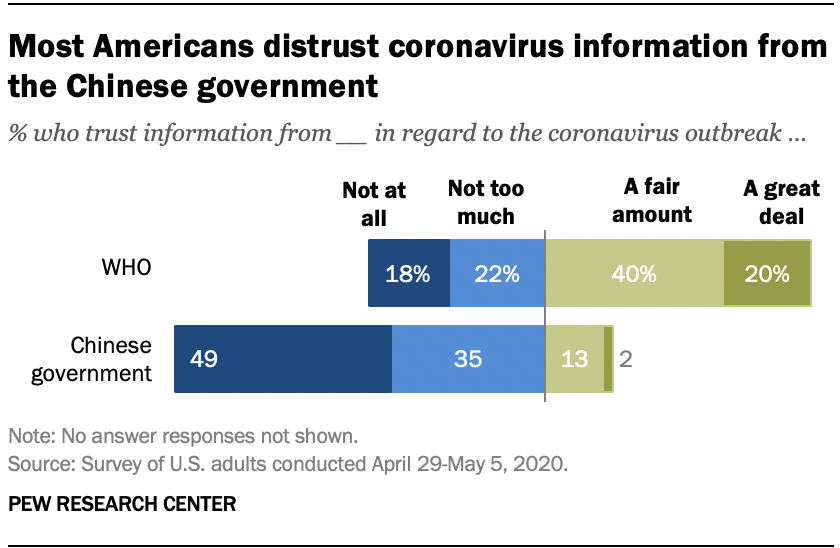 People who have no trust at all in information coming from the Chinese government are significantly more likely to say China has done a bad job handling the coronavirus outbreak (85%) than those who say they don’t place too much trust in the information (53%) or those who trust the information a fair amount (23%) or a great deal (17%). 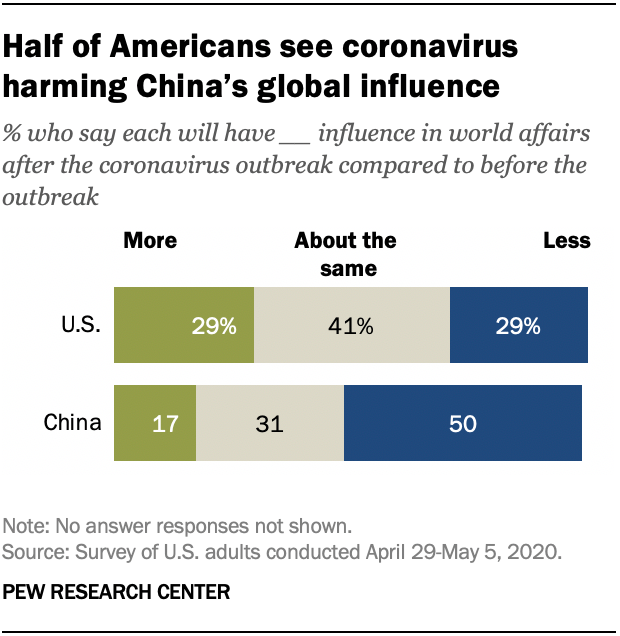 4Half of Americans say they think China will have less influence in world affairs after the coronavirus outbreak than it did before – more than twice as many as expect its influence to grow (17%) following the crisis (31% expect no real change). In comparison, a plurality of Americans expect their own country’s influence to remain largely unchanged (41%), while roughly three-in-ten each say U.S. influence will increase (29%) or decrease (29%). 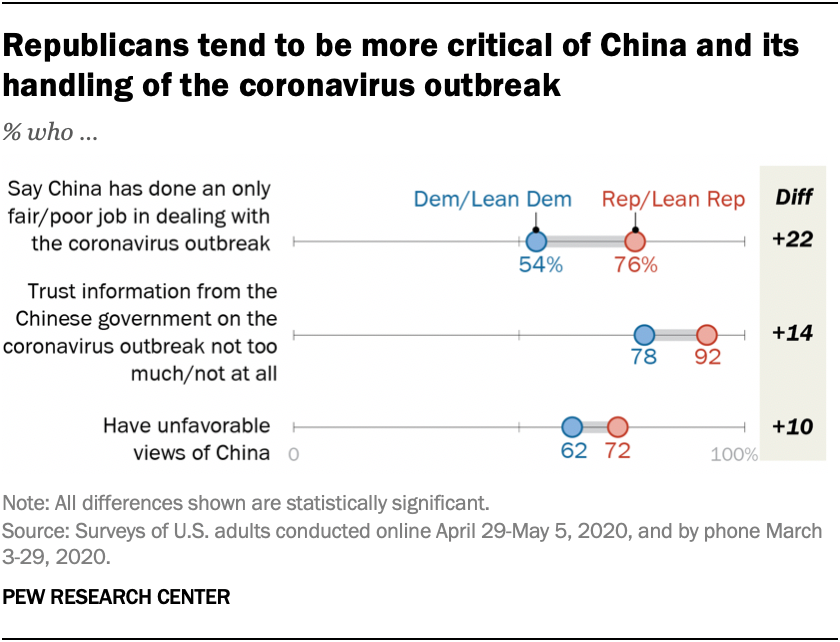 5Views of China are colored by partisanship. Generally speaking, Republicans and Republican-leaning independents are more negative toward China and more critical of the country and its handling of the coronavirus outbreak.

Republicans and those who lean toward the party have had more unfavorable views of China through much of Pew Research Center’s history of polling on the topic. In March, 72% said they had a negative view of the country, compared with 62% of Democrats and Democratic leaners. Republicans are also more critical of China’s handling of the coronavirus pandemic: In the April-May survey, 76% of Republicans and Republican leaners say the country has done a bad job, compared with 54% of Democrats and leaners who say the same. And, while large majorities of partisans on both sides of the aisle have little or no trust in coronavirus information coming from the Chinese government, a whopping 92% of Republicans hold this view, compared with 78% of Democrats.