To learn more about Americans’ views on the impeachment of President Donald Trump, we surveyed 10,300 U.S. adults from Feb. 18-March 2 – the second survey in the Center’s nearly yearlong Election News Pathways project. 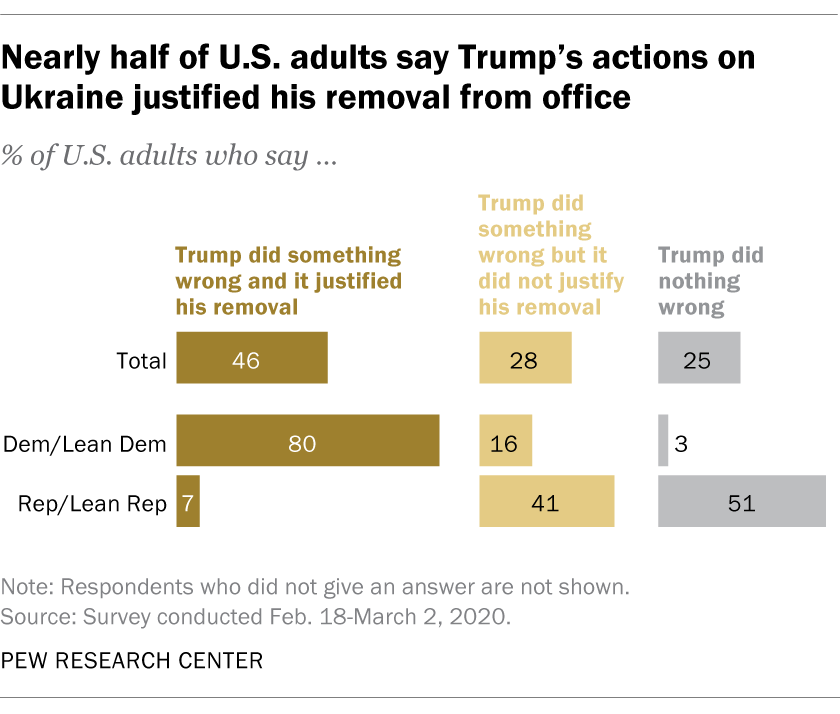 The stark partisan gap in these views is similar to the one observed in a survey before the Senate impeachment trial began. In that survey, 85% of Democrats and Democratic leaners said the Senate’s trial should result in Trump’s removal, while a nearly identical share of Republicans and GOP leaners (86%) said it should not.

The more recent survey is part of the Center’s nearly yearlong Election News Pathways project, an initiative focused on what Americans hear, perceive and know about the 2020 presidential election and how these attitudes relate to how and where they get news. You can access all of the data related to the public’s views of Trump’s impeachment in this interactive data tool. 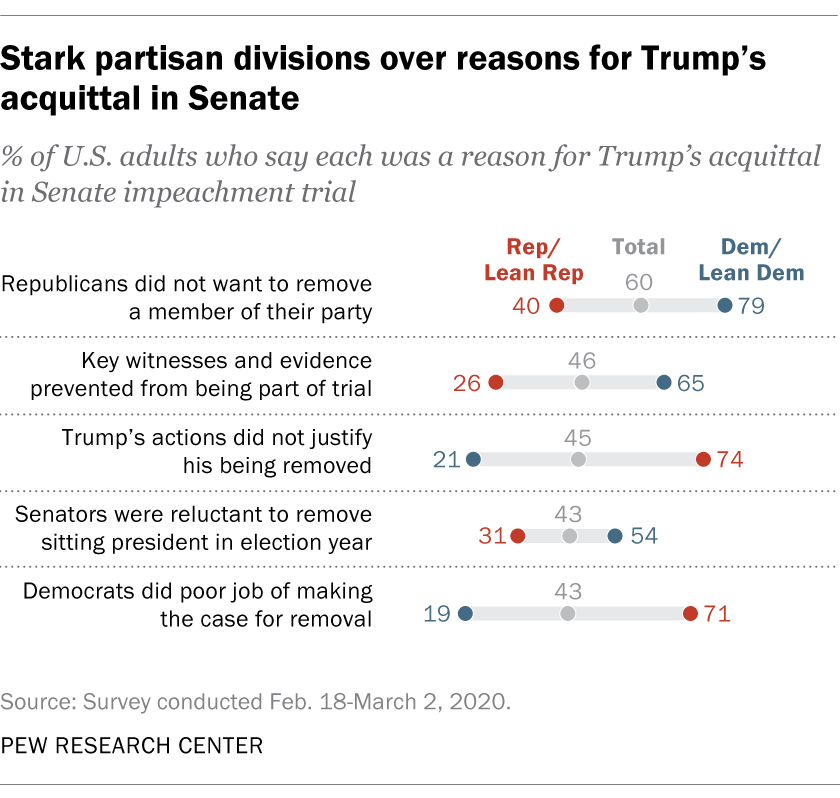 When it comes to why Trump was acquitted by the Senate, a majority of U.S. adults (60%) say one reason is that Republicans didn’t want to remove a president of their own party. Fewer than half of Americans see four other factors as reasons ­– that key witnesses and evidence were prevented from being part of the trial (46%), that Trump’s actions did not justify his being removed from office (45%), that senators were reluctant to remove a sitting president in an election year (43%) and that Democrats did a poor job of making the case for removal (43%).

Partisan differences are wide across all five of the potential reasons for acquittal asked about in the survey. For example, 71% of Republicans say a reason for Trump’s acquittal is that Democrats did a poor job of making the case for removal; just 19% of Democrats see this as a reason. Conversely, around two-thirds of Democrats (65%) say a reason is that key witnesses and evidence were prevented from being part of the Senate proceedings; only around a quarter of Republicans (26%) take this view.

Again, there are wide differences between partisans depending on their news diets. For instance, 84% of Democrats who get political news only from outlets with a left-leaning audience say a reason for the Senate’s acquittal of Trump is that Republicans didn’t want to remove a president from their own party. Among Republicans who get political news exclusively from outlets with a right-leaning audience, just 28% say this was a reason why Trump was acquitted.

Most Americans know that a GOP senator voted to convict

The Senate’s vote to acquit Trump was divided along partisan lines, with one exception: Republican Sen. Mitt Romney of Utah joined all Democrats to convict Trump on the charge of abuse of power.

When asked whether any Republicans voted to convict Trump in the Senate trial, around two-thirds of Americans (66%) correctly say yes, while 12% incorrectly say no and 22% say they aren’t sure. Similar majorities of Republicans (69%) and Democrats (65%) answer the question correctly.