Living with an extended circle of relatives is the most common type of household arrangement for older people around the world, according to a recent Pew Research Center study. But in the United States, older people are far less likely to live this way – and far more likely to live alone or with only a spouse or partner. 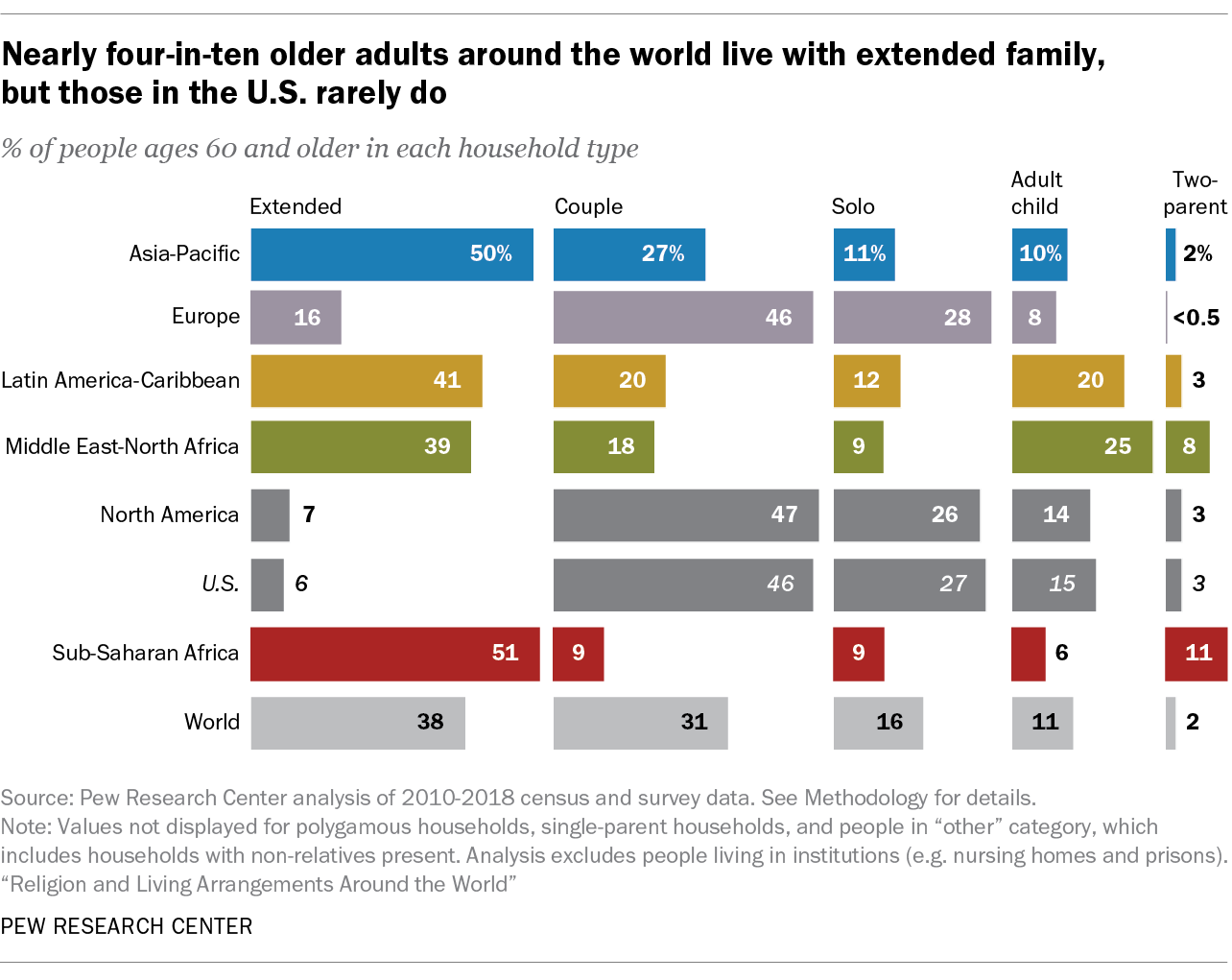 In the U.S., 27% of adults ages 60 and older live alone, compared with 16% of adults in the 130 countries and territories studied. In many countries in the Asia-Pacific, sub-Saharan Africa and the Middle East-North Africa regions – such as Afghanistan, Mali and Algeria – fewer than 5% of seniors live alone.

U.S. adults ages 60 and older also are more likely than their counterparts around the world to live as a couple without young children at home. Almost half of Americans in this age group (46%) share a home with only one spouse or partner, compared with three-in-ten globally (31%). Older adults in sub-Saharan Africa (9%) are especially unlikely to live in this arrangement.

Globally, living in extended-family households – those that include relatives such as grandchildren, nephews and adult children’s spouses – is the most common arrangement for people 60 and older. Nearly four-in-ten older adults (38%) live in this type of arrangement, including two-thirds or more in Iraq, Namibia and India. That compares with just 6% of people ages 60 and older in the U.S.

For this analysis, we looked at data on people’s household arrangements in 130 countries and territories, which are home to 91% of the global population. The findings were originally published in the report “Religion and Living Arrangements Around The World.”

The aggregated dataset includes 82.6 million individuals from 20.8 million households. Data comes from a variety of censuses and surveys conducted between 2010 and 2018, including the Demographic and Health Survey, Multiple Indicator Cluster Survey and European Social Survey. The analyses required data on religious affiliation and household rosters – lists of every member of a household along with their age, sex and relationship to the survey respondent. Rosters were used to code household types, such as extended family, couple, solo, adult child and two-parent.

The population examined in this post doesn’t include people living in institutions, such as nursing homes or prisons. However, the share of older adults in nursing homes is generally very small; in the U.S., fewer than 5% of adults ages 60 and older live in that type of facility.

The study presented results for six major religious groups: Christians, Muslims, the religiously unaffiliated, Hindus, Buddhists and Jews. People affiliated with other religious groups were included in overall global, regional and country-level results, but they were not reported on separately.

Here is the report’s methodology and a list of data sources by country.

Older people in the U.S. also stand out from many of their counterparts around the world when it comes to household size. The average person who is 60 or older in the U.S. lives with about one other person, resulting in a household size of 2.1 people. That compares with a worldwide average of 3.4 people.

Households are relatively small in other countries with advanced economies, including Denmark (where the average older adult lives in a household of 1.7 people), the UK (1.9) and South Korea (2.2). But they are much bigger in less economically advanced countries including Gambia (12.8), Senegal (12.5) and Mali (11.9).

While living arrangements for older people in the U.S. differ substantially from those in many other countries, they are consistent with those in other wealthy nations.

Generally, households are smaller in countries that are more prosperous, as defined by a variety of measures including education, longevity and economic output. (Scroll down for an interactive feature exploring this relationship.)

In countries with more advanced economies, people tend to have relatively few children and have them later in life; they are also more likely to live well beyond their childbearing years. Governments in wealthier countries also may offer financial assistance or health care benefits to retired adults, making it more affordable for older people to stay in their own homes. In many European countries, for example, rates of living alone for older people are even higher than they are in the U.S.

In poorer countries, extended-family households are more common: Financial resources stretch further and domestic chores are more easily accomplished if they are shared among several adults living together. And in countries where governments provide fewer retirement benefits or other safety nets for older adults, families have a greater responsibility to care for aging relatives.

Data from Canada indicates that Hindus outside of India – who often are immigrants or the children of immigrants from South Asia – are more likely than their neighbors to live in extended families. In Canada, 47% of Hindus ages 60 and older live with extended families. That’s more than four times the share of Canadian seniors overall (10%).

Setting these differences aside, most countries in the world have a few things in common: Older women are considerably more likely than older men (20% vs. 11%) to live in solo households. This can be partially explained by a tendency among women to live a few years longer and partner with men who are older.

Another common theme is that people are more likely to live in smaller households in their later years. The average person who is 60 or older lives in a household of 3.4 people, compared with 4.7 people for adults ages 18 to 59.

Topics
Religion and SocietyGenerations and AgeHousehold and Family Structure
Share this link:

With billions confined to their homes worldwide, which living arrangements are most common?
Key findings: How living arrangements vary by religious affiliation around the world
Younger people are less religious than older ones in many countries, especially in the U.S. and Europe
U.S. has world’s highest rate of children living in single-parent households
Globally, women are younger than their male partners, more likely to age alone
Trump used his clemency power sparingly despite a raft of late pardons and commutations
Biden Begins Presidency With Positive Ratings; Trump Departs With Lowest-Ever Job Mark
Almost all U.S. presidents, including Trump, have been Christians
How we know the drop in Trump’s approval rating in January reflected a real shift in public opinion
What Biden and Trump voters say they want the other candidate’s supporters to know about them