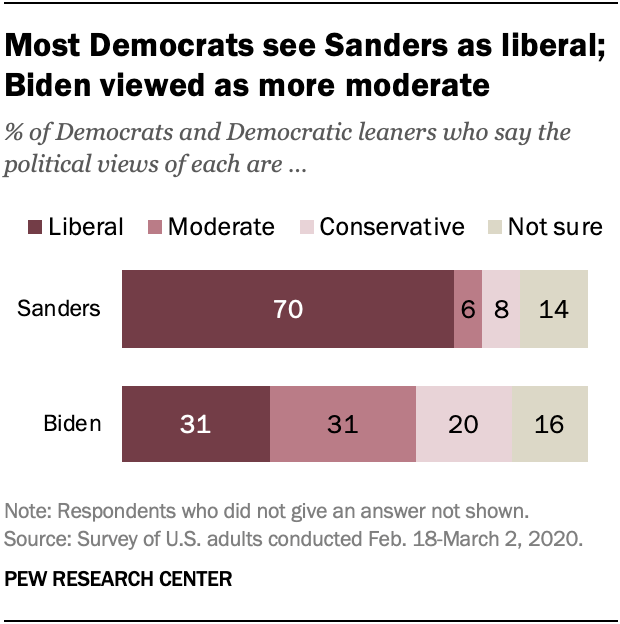 In the wake of Super Tuesday, the Democratic presidential primary field has narrowed to front-runners Bernie Sanders and Joe Biden. Democrats see big ideological differences between the two candidates, according to data from Pew Research Center’s Election News Pathways project.

Most Democrats and Democratic-leaning independents describe Sanders’ political views as liberal (70%), including about half (48%) who say he is “very liberal.” By contrast, Democrats are about as likely to describe Biden’s views as moderate (31%) as they are to describe them as liberal (31%); 20% view Biden as conservative.

About 15% of Democrats say they’re not sure what Sanders’ or Biden’s political views are (14% and 16%, respectively). Uncertainty about their views is especially high among Democrats who are not following election news closely (31% for Biden, 25% for Sanders).

This post studies how Democrats perceived the political views of Vice President Joe Biden and Sen. Bernie Sanders in the weeks before Super Tuesday. It uses data from a survey of 10,300 U.S. adults, including 5,771 who identify as Democrats or as independents who lean toward the Democratic Party. The survey was conducted Feb. 18 to March 2, 2020, and asked respondents to rate Biden’s and Sanders’ political views on a scale from “very liberal” to “very conservative.”

All survey participants are members of Pew Research Center’s American Trends Panel, a nationally representative online survey panel. Panelists were recruited by telephone or mail so that nearly every U.S. adult has a known chance of being selected. The data is weighted to further ensure it reflects the U.S. adult population by gender, race, ethnicity, partisan affiliation, education and other categories.

A Pew Research Center survey earlier this year found that nearly half of Democratic and Democratic-leaning registered voters (47%) describe their own views as liberal, compared with 38% who identify as moderate and 14% who call themselves conservative. The share of self-identified liberals among Democratic voters is higher than it was in 2012 and earlier, but little changed over the past few years.

The new survey – conducted Feb. 18 to March 2 among 10,300 U.S. adults, including 5,771 Democrats and Democratic leaners – finds differences among Democrats in perceptions of Biden’s and Sanders’ political views by race and ethnicity, age, education and ideology. 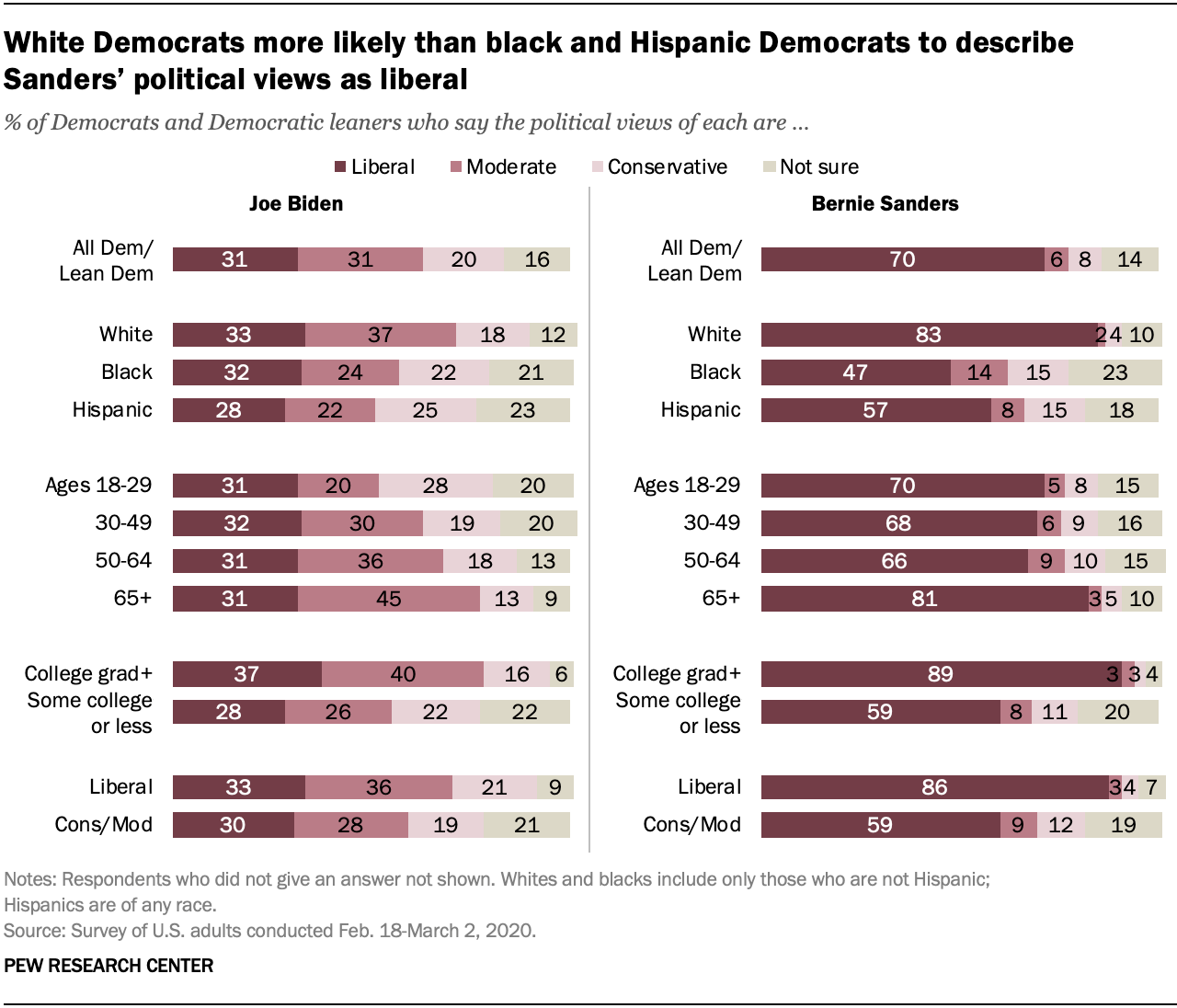 When it comes to views of Biden’s ideology, differences in views by race and ethnicity are more modest than in views of Sanders. However, white Democrats (37%) are more likely than black Democrats (24%) or Hispanic Democrats (22%) to view him as moderate. As with views of Sanders, a larger share of black and Hispanic than white Democrats say they aren’t sure how to describe Biden’s political views. (These patterns hold even among those who follow political and election news very or somewhat closely.)

Majorities of Democrats across age groups view Sanders as liberal, with relatively modest differences from one age group to the next – the exception being Democrats ages 65 and older, who overwhelmingly say Sanders is liberal (81%). However, there is an age gap in views of Biden: Nearly half of Democrats 65 and older (45%) say Biden’s views are moderate, while 31% say he is liberal and just 13% call him conservative. Among Democrats ages 18 to 29, by contrast, nearly as many describe Biden’s views as conservative (28%) as liberal (31%), while 20% view him as moderate. 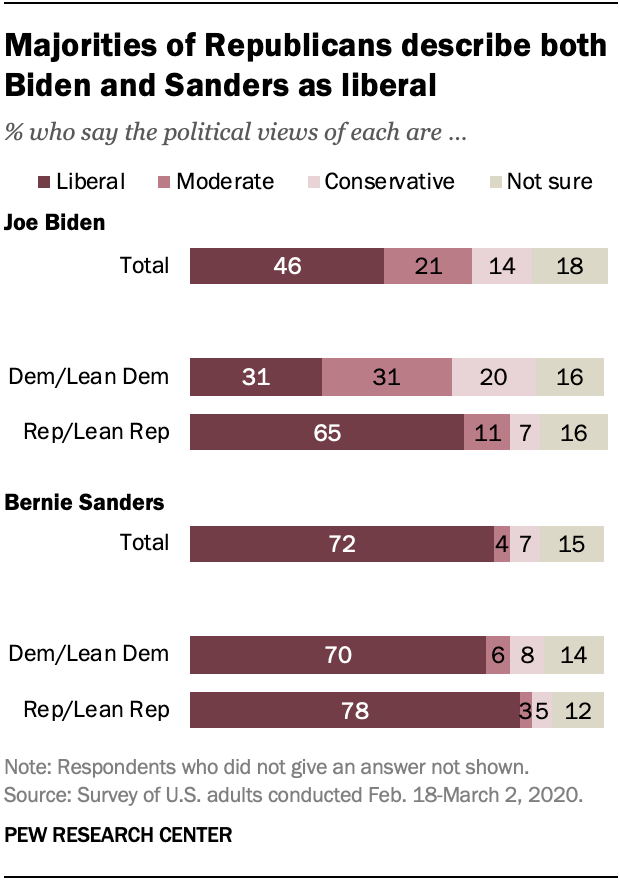 There is less variation by ideology in assessments of Biden’s political views, though liberal Democrats are somewhat more likely to say he is moderate (36% vs. 28% among moderate or conservative Democrats).

While Democrats see Biden and Sanders in different ideological terms, most Republicans and Republican-leaning independents view both candidates the same way: as liberals.

Majorities of Republicans say Sanders’ and Biden’s views are liberal (78% and 65%, respectively). However, Republicans are much more likely to describe Sanders as very liberal (68%) than to say this about Biden (21%).