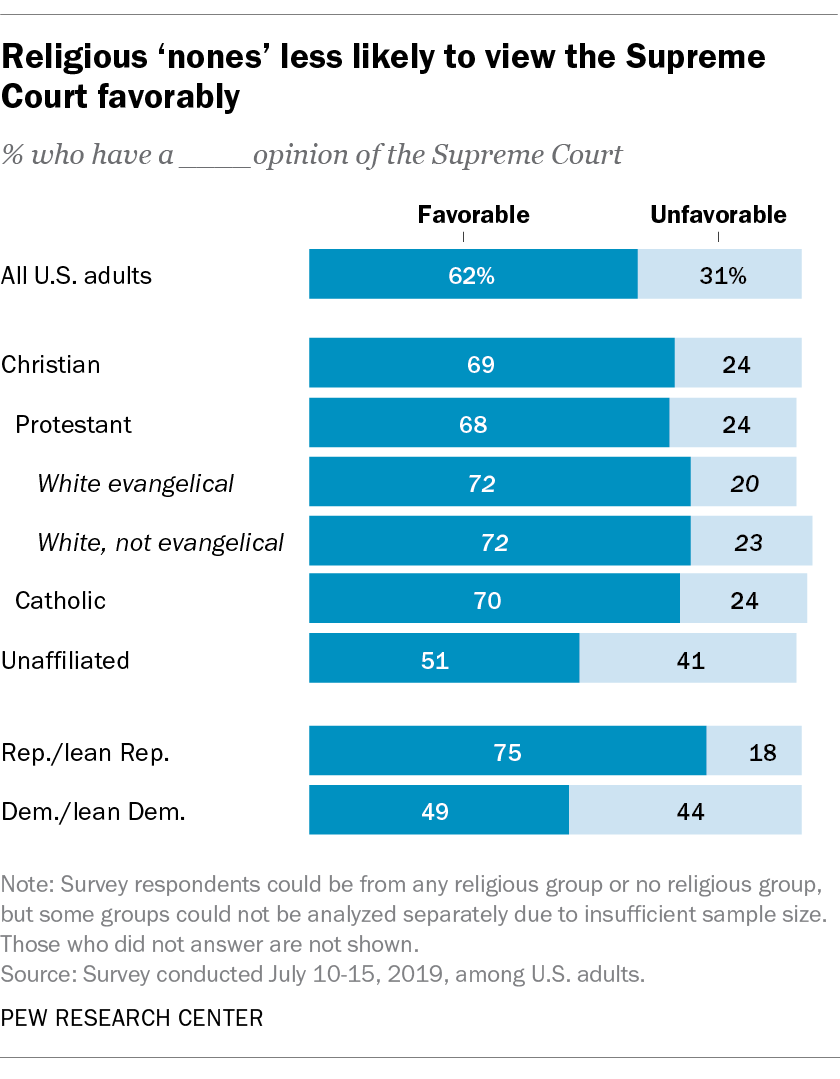 The Supreme Court is hearing arguments this week about a Louisiana law that restricts access to abortions and is among several recent state laws designed to challenge Roe v. Wade. There are other cases on the docket that could have long-term implications for issues tied to religion, including cases that examine public funding for religious schools and the tension between nondiscrimination laws and religious liberty.

Americans enter this key stretch feeling good about the Supreme Court. While a 62% majority of Americans overall have a favorable opinion of the court, Christians are more likely than religiously unaffiliated Americans to see it favorably (69% vs. 51%). This includes about seven-in-ten among white evangelical Protestants, white Protestants who do not identify as born-again or evangelical Christians (72% each), and Catholics (70%), according to a Pew Research Center survey conducted in July 2019.

With several religion-related Supreme Court cases in the news, we wanted to examine how attitudes about the court – and some of the issues it’s tackling this year – differ by religious identity and political affiliation. The analysis includes public opinion data from Pew Research Center surveys conducted online and on the phone in 2015, 2016, 2018 and 2019. Links to these surveys, including field dates and sample sizes, are in the text of the analysis. Online and phone surveys conducted by the Center are weighted to be representative of the U.S. adult population by factors including gender, race, ethnicity, education and other categories.

Views of the court also diverge along party lines: Among Republicans and Republican-leaning independents, three-quarters have a favorable view of the Supreme Court, compared with about half of Democrats and Democratic leaners (75% vs. 49%). Religiously unaffiliated adults – that is, who identify as atheist, agnostic or “nothing in particular” – are largely Democratic, while white evangelical Protestants are solidly Republican and Republican leaning.

Republicans and white evangelicals view the court much more favorably than they did during Barack Obama’s presidency. In 2015, just after the court legalized same-sex marriage nationally and upheld a key element of the Affordable Care Act, just a third of Republicans and three-in-ten white evangelicals had favorable views of the Supreme Court. But since then, President Donald Trump has appointed two new justices – Neil Gorsuch and Brett Kavanaugh – and the court has issued a few religion-friendly rulings.

Before Kavanaugh’s confirmation in 2018, Pew Research Center asked Americans whether they thought he would vote to overturn the 1973 Roe v. Wade ruling, which established a constitutional right to abortion. 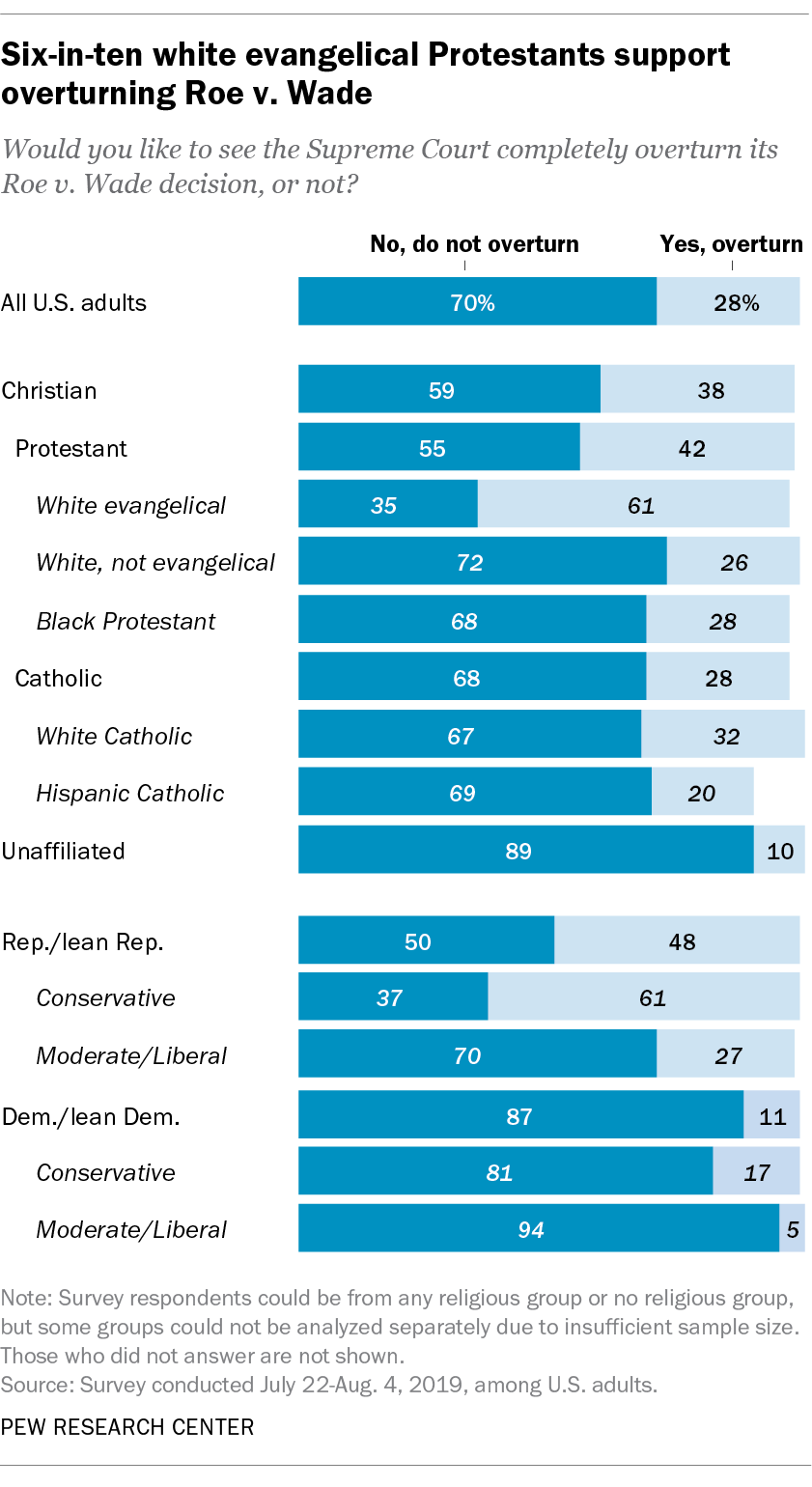 In a 2019 survey, most Americans (70%) said they oppose overturning Roe v. Wade. But several states have enacted laws designed to challenge the ruling in recent years, including bills passed in seven states (among them Louisiana) that seek to ban almost all abortions.

White evangelical Protestants (61%) are much more likely to say they want the high court to completely overturn Roe v. Wade than are Catholics (28%), white Protestants who are not evangelical (26%) and religious “nones” (10%).

From a political perspective, Republicans who describe their political ideology as conservative are more likely than Republicans who describe their ideology as moderate or liberal to be in favor of overturning Roe v. Wade (61% vs. 27%). Nearly nine-in-ten Democrats and Democratic leaners (87%) don’t want Roe v. Wade overturned. 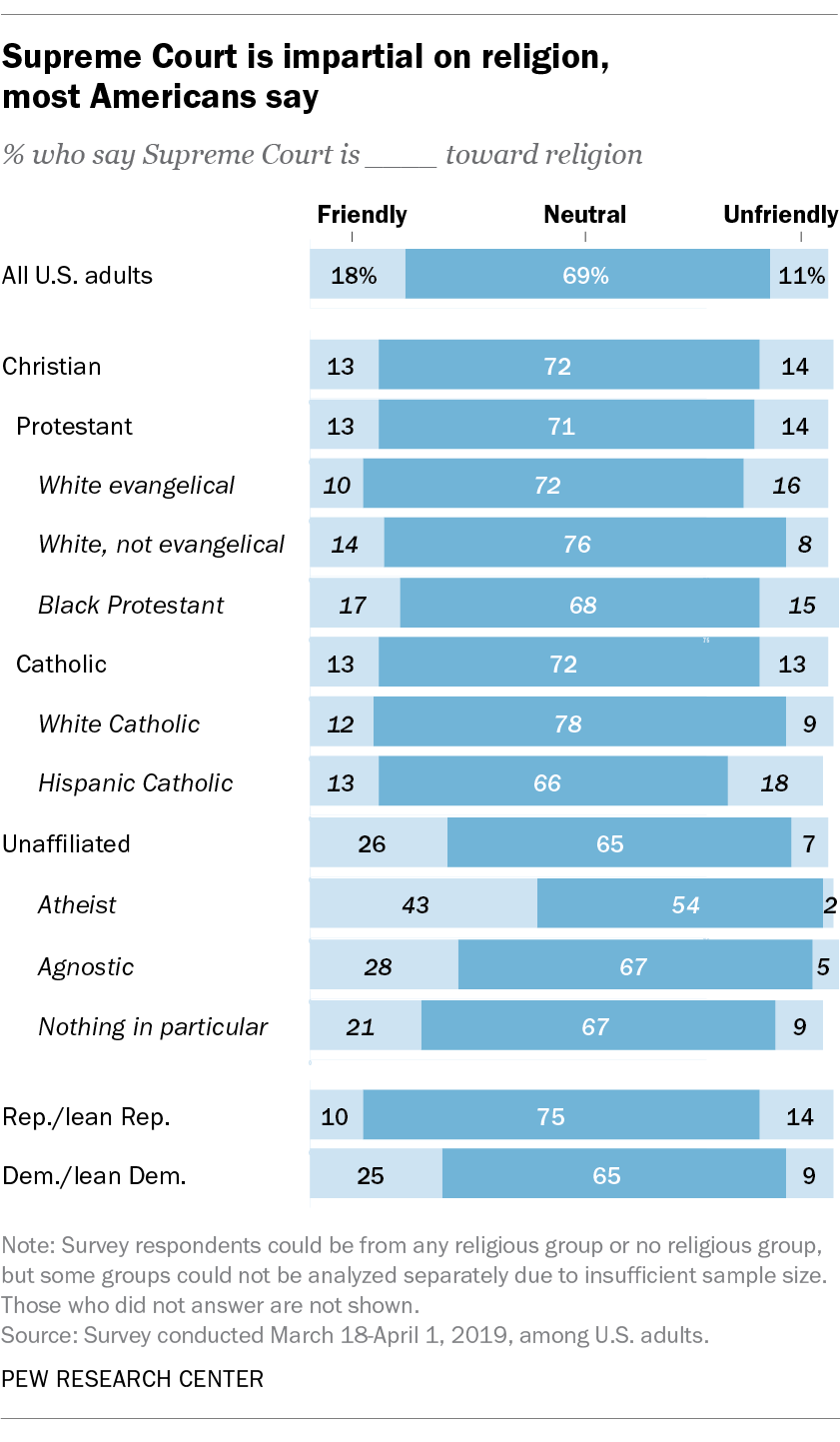 Moreover, many Americans agree that Supreme Court appointments are an important factor to consider when making voting decisions.

Before the 2016 presidential election, 65% of U.S. registered voters said that Supreme Court appointments were “very important” to their vote, a higher share than those who said this about trade policy (57%) and the environment (52%), but a lower share than those who cited the economy (84%) and terrorism (80%). Registered voters in many religious groups mentioned Supreme Court nominations as a top voting issue, including 70% of white evangelical Protestants, 66% of Catholics, 61% of white Protestants who are not evangelical, and 58% of religious “nones.” Supreme Court appointments also mattered to a majority of Republicans and Republican leaning-voters (70%), as well as to Democrats and Democratic leaners (62%).