Here are five facts about black Democrats nationwide, drawn from Pew Research Center surveys conducted in the past year.

This post on black Democrats draws on previously published data from national Pew Research Center surveys conducted in the past year. Several of these surveys were conducted using the Center’s American Trends Panel (ATP), an online survey panel that is recruited through national, random sampling of residential addresses. This way nearly all U.S. adults have a chance of selection. The survey is weighted to be representative of the U.S. adult population by gender, race, ethnicity, partisan affiliation, education and other categories. Read more about the ATP’s methodology. The 2000-2019 trend on ideological self-identification draws on Pew Research Center telephone surveys. For more detail on that methodology, see this post. 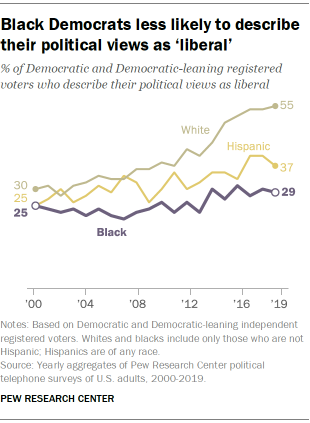 While black Democratic voters are less likely than other Democratic voters to describe themselves as liberal, there’s a good deal of agreement on several issues between black Democrats and Democrats of other races and ethnicities. For instance, a fall 2019 Pew Research Center survey found that white, black and Hispanic Democrats have broadly similar views that immigrants make a positive contribution to the country and that it’s the government’s responsibility to help poor people and to ensure Americans have health care coverage. One issue where black Democrats differ from other Democrats is same-sex marriage: 88% of white and 76% of Hispanic Democrats say legal same-sex marriage is a good thing for society, compared with a significantly smaller share of black Democrats (52%). 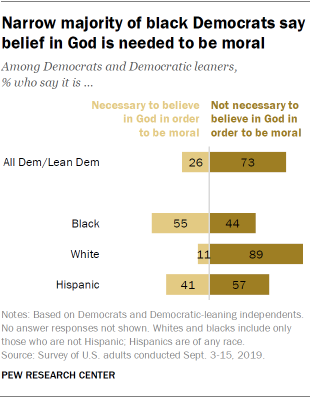 Black Democrats express high levels of religiosity and hold positive views of religious institutions. When asked about their religion, large majorities of black Democrats affiliate with a religion, and they are more likely than other Democrats to say they attend religious services regularly.

On how they see religion’s role in society, most black Democrats (57%) say churches and religious organizations do more good than harm, while smaller shares of white (39%) and Hispanic (45%) Democrats take this view.

3Black Democrats are more likely than others in the party to view racism as a very big problem in the country. When asked to evaluate major problems in the country, black Democrats are in agreement with other members of their party on a number of issues: Majorities of Democrats across racial and ethnic groups view the affordability of health care, economic inequality and the affordability of college education as very big problems for the country.

By contrast, fewer black Democrats (56%) see climate change as a very big problem for the country than white (79%) and Hispanic (72%) Democrats. 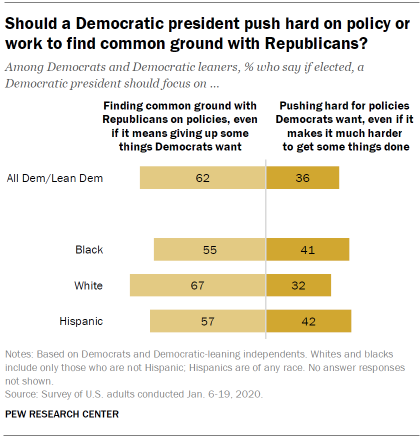 Still, a 55% majority of black Democrats say they prefer a candidate who would find common ground with Republicans, a view shared by 67% of white and 57% of Hispanic Democrats. 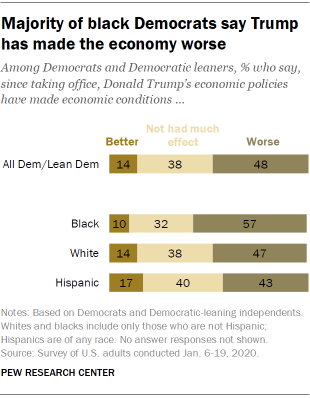 Black Democrats hold intensely negative views of Donald Trump and his policies. An overwhelming majority of black Democrats (96%) say they disapprove of how Trump is handling his job as president – including 79% who say they strongly disapprove. These views are similar to ratings of Trump among white and Hispanic Democrats.