Saudi Crown Prince Mohammed bin Salman (sometimes known as MBS) is the de facto leader of Saudi Arabia and next in line for the kingdom’s throne. During his time in power, the prince came under worldwide scrutiny after the 2018 killing of journalist and Saudi critic Jamal Khashoggi in the kingdom’s consulate in Turkey. More recently, the United Nations has opened an inquiry into whether the crown prince hacked the cellphone of Amazon CEO Jeff Bezos in May 2018. Bezos also owns The Washington Post, for which Khashoggi wrote.

Here are perceptions of Crown Prince Mohammed in the U.S. and among those in countries in the Middle East-North Africa region: 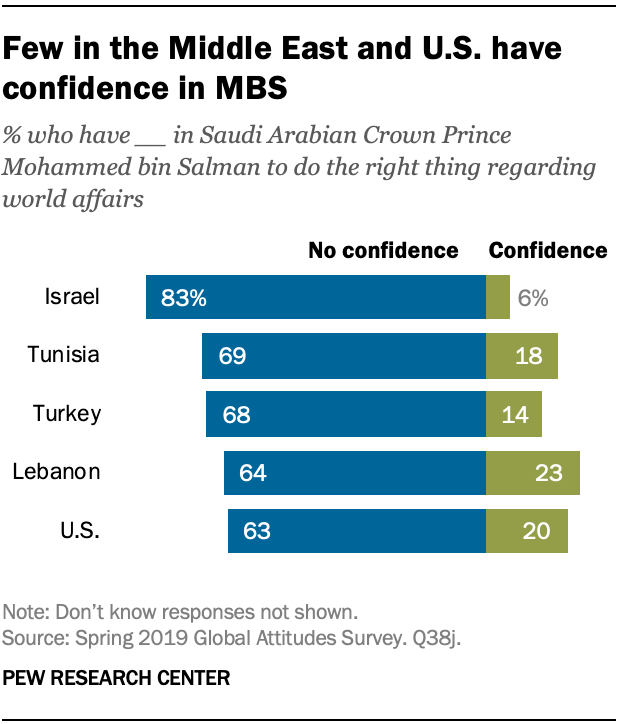 Most across the Middle East and in the U.S. lack confidence in Saudi Crown Prince Mohammed to do the right thing regarding world affairs. Among those in the five countries where the question was asked, Israelis have the least faith in the prince, with roughly eight-in-ten saying they doubt his ability to effectively manage international dealings. Only about a fifth of American and Lebanese respondents express confidence that the crown prince can effectively handle international concerns.

In the U.S., Republicans and Republican-leaning independents are slightly more likely to trust Crown Prince Mohammed than are Democrats and Democratic-leaning independents, although both groups overwhelmingly lack confidence in him. Around a quarter of Republicans (27%) say they have confidence in the Saudi crown prince to do the right thing regarding world affairs, compared with 18% of Democrats who say this.

This analysis focuses on how publics in the Middle East and North Africa (MENA) view Saudi Crown Prince Mohammed bin Salman’s handling of world affairs. For this post, we used data from a survey conducted in four MENA nations and the U.S. from May 13 to Aug. 29, 2019, totaling 5,561 respondents. Here are the questions used for this report, along with responses and its methodology. 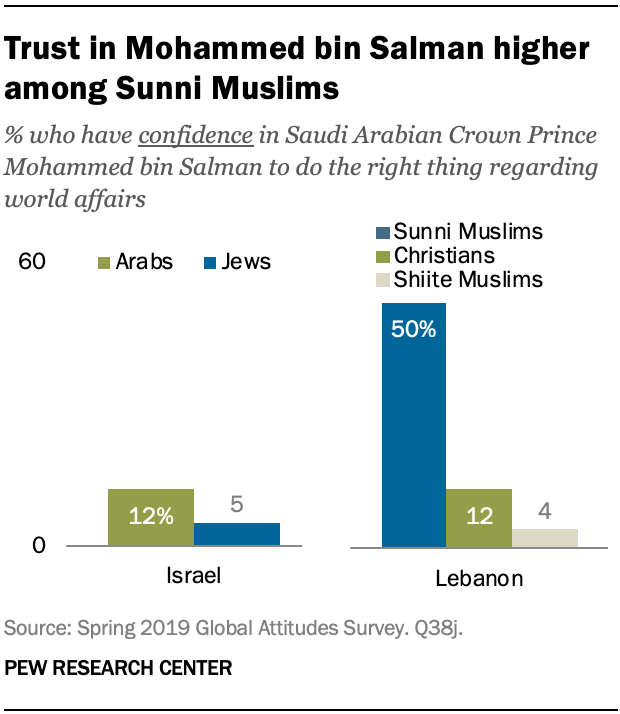 Trust in the crown prince differs between religious and ethnic groups. In Israel, trust in Crown Prince Salman is slightly higher among Israeli Arabs than among Israeli Jews, even as trust is low overall in both groups. Specifically, 12% of Israeli Arabs and only 5% of Israeli Jews expressed confidence in the leader. Religious differences also are present in Lebanon. There, Sunni Muslims clearly have the most confidence in the crown prince (50%), who is also a Sunni Muslim, while few say the same among Lebanese Christians (12%) and Shiite Muslims (4%).

Compared with perceptions of current King Salman in 2017, the crown prince is seen as less trustworthy in his approach to foreign affairs. In 2017, Pew Research Center asked adults in four Middle Eastern and North African countries if they had confidence in King Salman, and in all four, evaluations of the king were significantly more positive than the opinions of his son, the prince, given in 2019. Among Turks and Israelis, Crown Prince Mohammed is about as trusted as his uncle, the late King Abdullah, was in 2011, while in Lebanon, King Abdullah was considerably more popular than both his nephew and half-brother, King Salman. 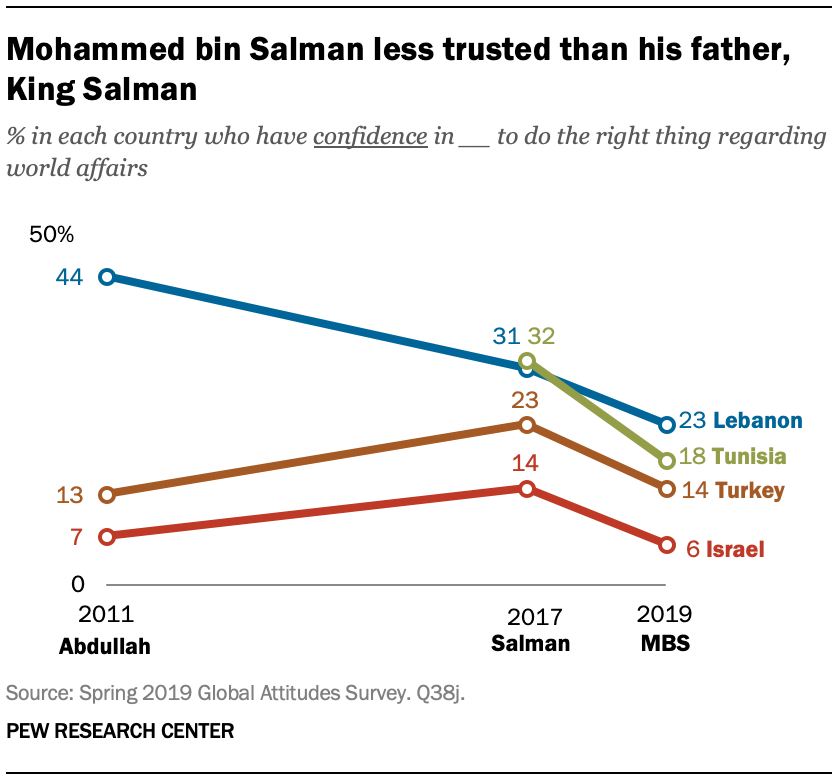 Between 2017 and 2019, events occurred that may have dampened support for Saudi leaders. Not least was the assassination of Khashoggi in Istanbul, which added to already fraught relations between Turkey and Saudi Arabia. The killing also drew broad international backlash, including protests against the crown prince’s state visit to Tunisia in 2018, where confidence in Saudi leadership fell by 14 percentage points. The decline in Lebanon may be tied to the alleged kidnapping of now former Lebanese prime minister, Saad Hariri, in Saudi Arabia during a state visit in late 2017. 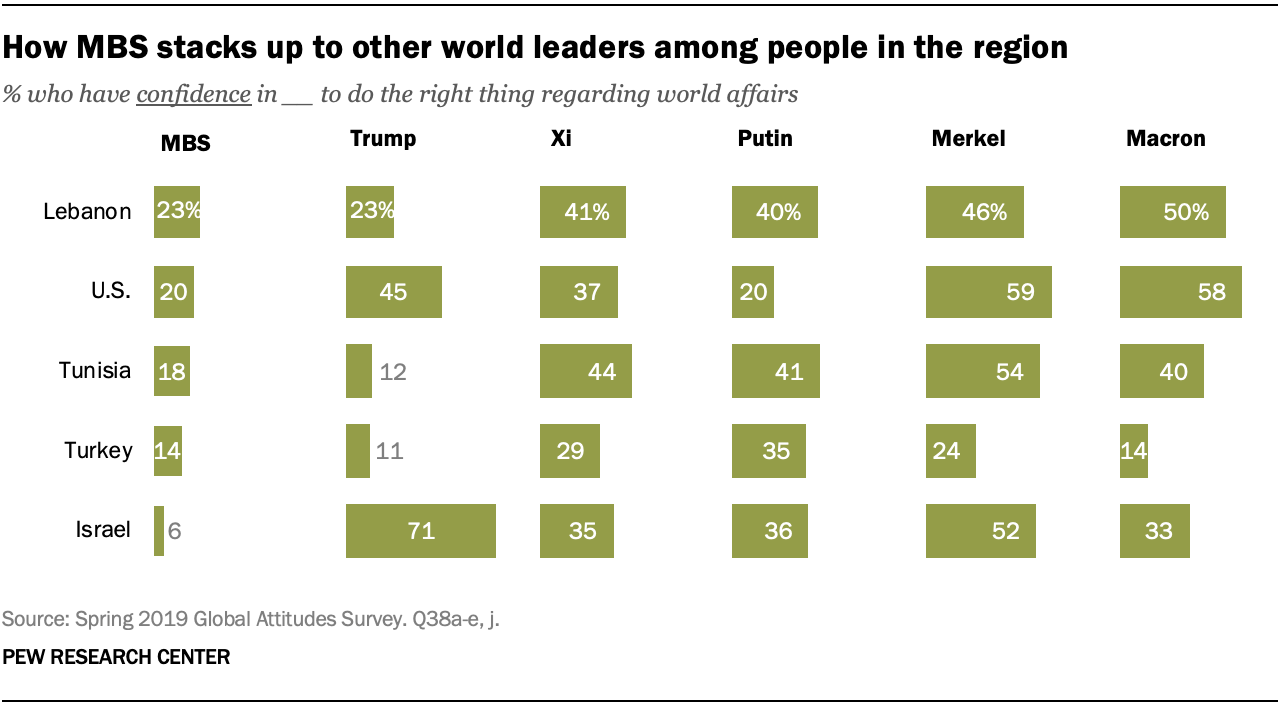 Note: Here are the questions used for the survey cited in this report, along with responses and its methodology.

Few in other countries approve of Trump’s major foreign policies, but Israelis are an exception

Saudi Arabia’s Mohammed bin Salman garners little trust from people in the region and the U.S.