Tensions between the United States and Iran escalated in the wake of American airstrikes that killed Iranian Gen. Qassem Soleimani on Jan. 3, 2020. The action marked yet another setback in relations between the two countries – a relationship already strained after the Trump administration imposed sanctions, labeled the Iranian Revolutionary Guard a “foreign terrorist organization” and withdrew from an international agreement that limited Iran’s nuclear activity.

Here are findings drawn from our spring 2019 global survey about perceptions of Iran as a threat, how other Middle Eastern and North African countries view the country’s role in the region and how people around the world view U.S. policy toward Iran.

This analysis focuses on recent global perceptions of Iran as a threat, Middle Eastern and North African views of Iran’s role in the region, and how countries viewed the U.S. decision to withdraw from the Iran nuclear weapons agreement (also known as the Joint Comprehensive Plan of Action or JCPOA). The data featured here includes both attitudes at the country level as well as individual-level attitudes, such as what share of the public with a favorable view of U.S. President Donald Trump also approved of the U.S. withdrawal from the JCPOA.

For this analysis, we used data from a survey conducted among 36,923 people in 33 countries from May 18 to Oct. 2, 2019. The survey was conducted prior to the Jan. 3, 2020, U.S. missile strike that killed Iranian Gen. Qassem Soleimani. The surveys were carried out face-to-face across Africa, Latin America, the Middle East and South Asia and on the phone in North America and the Asia-Pacific. Across Europe, the survey was conducted over the phone in France, Germany, the Netherlands, Spain, Sweden and the UK, but face-to-face in Central and Eastern Europe, Greece, Italy, Ukraine and Russia. U.S. data and analysis are excluded from this post. This post also uses data from a 2017 survey conducted among 6,204 respondents in Israel, Jordan, Lebanon, Tunisia and Turkey from Feb. 27 to April 25, 2017. The surveys in all five countries were conducted face-to-face. 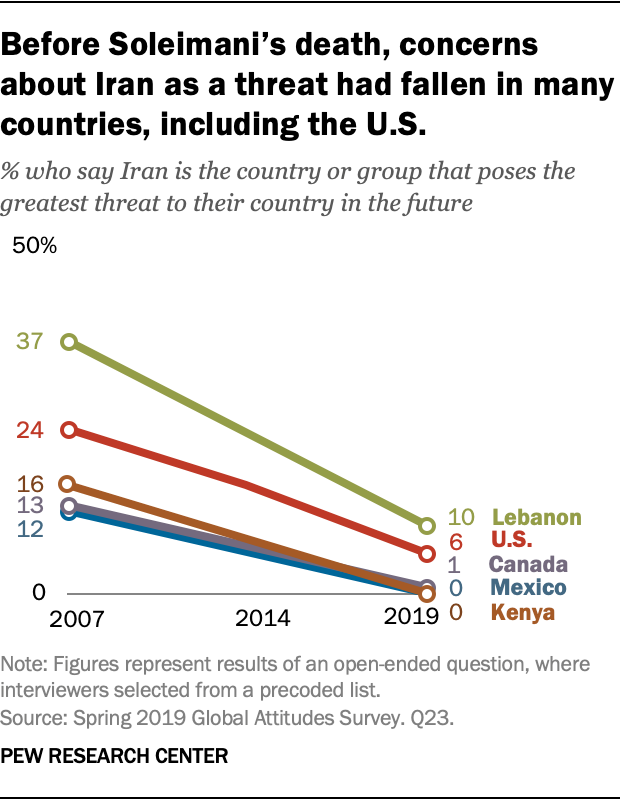 Responding to an open-ended question asking which country or group poses the greatest threat to their country in the future, just 6% of Americans named Iran in spring 2019, prior to the missile strike that killed Soleimani. This figure represents the smallest share naming Iran as America’s greatest threat since the question was first asked in 2007. That year, nearly a quarter of Americans chose Iran as the greatest threat to the country. As of 2019, Americans were much more concerned about the threats posed by China (24%), Russia (24%) and North Korea (12%).

Double-digit declines in the shares that perceived Iran as the greatest danger to their country were also seen outside the U.S. 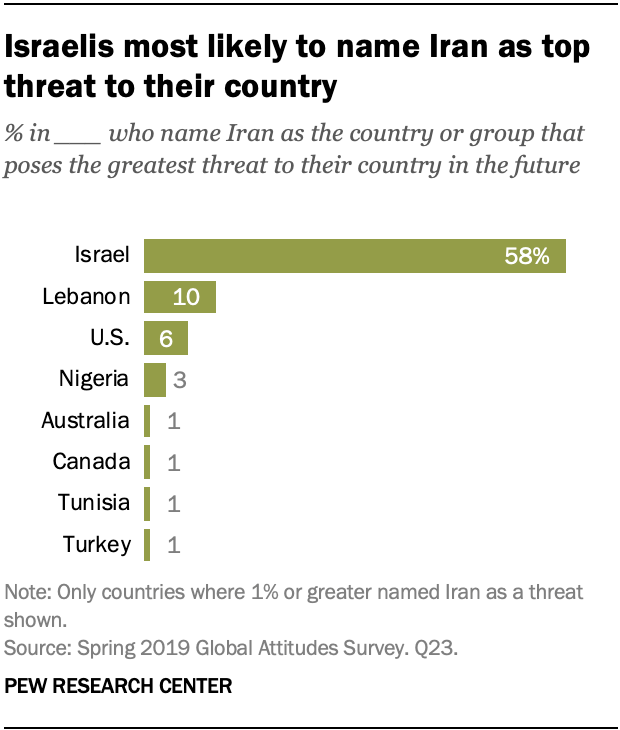 There were stark divides in the Middle East and North Africa over the extent to which Iran is perceived as a threat. Israelis were the most unequivocal. About six-in-ten said in 2019 that Iran presents the greatest danger to their country, making it the most frequently selected country or group among Israelis. In addition, 5% named Hezbollah as Israel’s top threat, making the Iran-backed Lebanese Shiite group the third-most commonly named actor, roughly tied with Syria, which was named by 6% of Israelis.

Lebanese were less concerned about Iran; one-in-ten said Iran presented the most danger to their country. The share who named Iran as the top threat to Lebanon was surpassed only by the share who named Israel (49%) and roughly tied with those who pointed to Syria (11%).

In Turkey and Tunisia, only 1% in both countries named Iran as the greatest threat to their country. 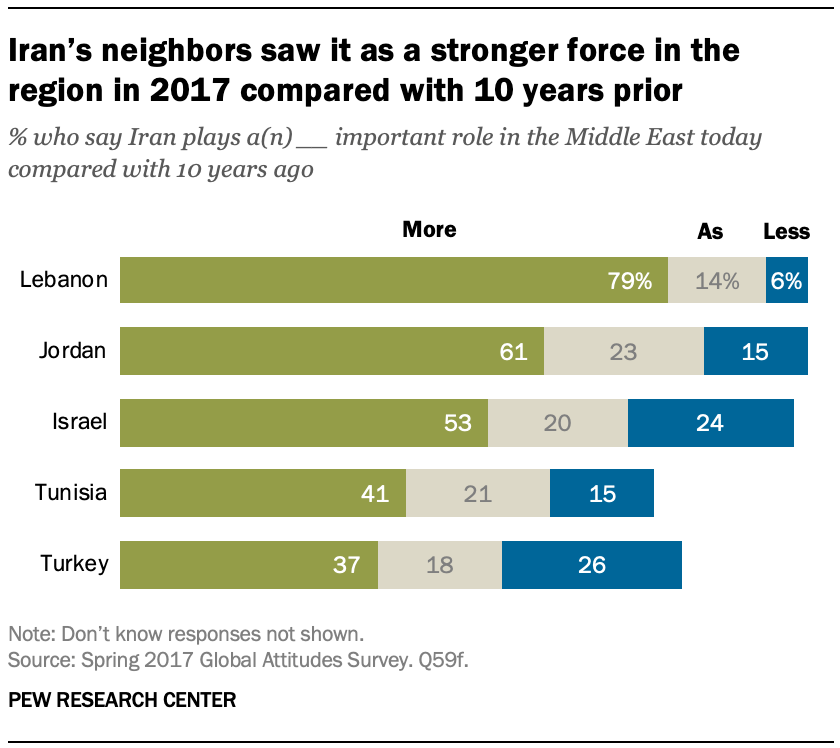 Despite the declining share in some countries that view the Islamic Republic as a threat, some of its neighbors thought its influence was on the rise. When asked in 2017, a majority of Lebanese and Jordanians and more than half of Israelis said they believed Iran played a more important role in the Middle East at that time than it did 10 years prior. Sizable shares in Tunisia and Turkey agreed; in both countries people were more likely to say that Iran’s stature in the region had grown than they were to say it stayed the same or declined.

Many around the world do not approve of U.S. withdrawal from the Iran nuclear deal

Among most of the 33 countries surveyed in 2019, majorities or pluralities disapproved of the U.S. decision to withdraw from the Iran nuclear weapons agreement (known as the Joint Comprehensive Plan of Action, or JCPOA). A median of 52% disapproved of this action, compared with a median of 29% who approved. The largest source of support for the U.S. action came from Israel, where 66% expressed a favorable view last year. Disapproval tended to be highest in Western Europe, Russia and Canada. However, in 14 countries, one-in-five or more did not express an opinion. 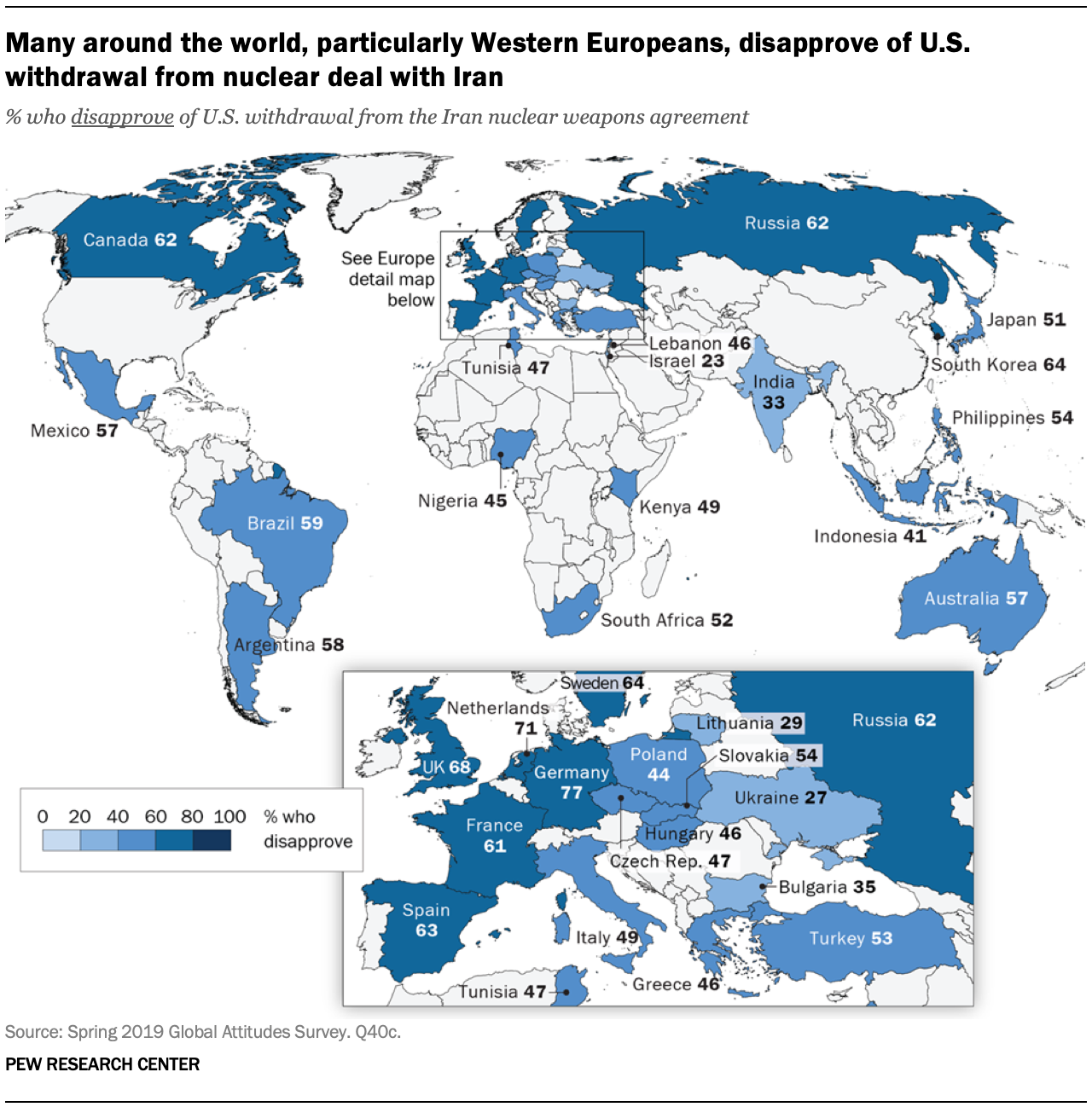 Negative sentiment was particularly high in France, Germany and the UK, key players in the negotiation of the pact. These countries challenged Iran’s recent decision to lift limits on production of enriched uranium (a key feature of the agreement). Majorities in these three European nations viewed the U.S. withdrawal from JCPOA unfavorably. In Germany, 77% disapproved, the highest share among the 33 countries surveyed.

People in a handful of countries have changed their view of the U.S. pulling out of the JCPOA since the question was first asked in 2017. Russians, in particular, grew far less supportive of the move than in the past, with approval of the withdrawal falling by 25 percentage points, from 38% in 2017 to 13% in 2019. Despite this, the Russian government has not joined European JCPOA signatories in triggering dispute mechanisms over Iran’s breach of the original agreement terms.