Access to clinics has become part of the long-running battle over abortion in the United States. A recent New York Times analysis shows that access to abortion clinics in many parts of the country has been decreasing in recent years.

Proximity to abortion clinics is associated with individual perceptions of how easy or difficult it is to obtain an abortion. However, partisanship is a more important factor than distance to the nearest abortion provider in shaping peoples’ views of whether an abortion should be harder or easier to obtain locally, according to a new Pew Research Center analysis of an American Trends Panel survey conducted July 22-Aug. 4, 2019.

Among all adults, those who live more than 5 miles from the nearest abortion clinic are more likely than those who live closer to say abortions should be harder to obtain.

Yet this difference is largely attributable to the differences in the partisan composition of these areas. Republicans and Republican-leaning independents – regardless of where they live – are far less likely than Democrats and Democratic leaners to say it should be easier to obtain an abortion in their area, and Republicans are also more likely than Democrats to live in communities that are further away from an abortion clinic.

For this analysis, we surveyed 4,175 U.S. adults in July 2019. Everyone who took part was a member of the American Trends Panel (ATP), an online panel survey that is recruited through national, random sampling of residential addresses. Recruiting our panelists by phone or mail ensures that nearly all U.S. adults have a chance of selection. This gives us confidence that any sample can represent the whole population (see our Methods 101 explainer on random sampling).

Respondents to the survey were geocoded to match them to the nearest abortion clinic. The abortion clinic data was obtained from Advancing New Standards in Reproductive Health (ANSIRH), a research group at the University of California, San Francisco. Distance to the nearest clinic was calculated using the spherical law of cosines to translate the latitude and longitude coordinates of panelists and abortion clinics into miles.

Here are the questions used, and the responses, for the report and its methodology.

When partisanship is taken into account, perceptions about whether abortion should be made easier or harder in their area do not vary much between people living in areas with abortion clinics and those who live a far distance from the nearest clinic. And to the modest extent that these differences in proximity do matter, those living further away from a clinic are more likely than those who live closer to say that it should be made harder to obtain an abortion in their area. An analysis controlling for other factors (age, sex, race, education and ideology) confirms this overall pattern. 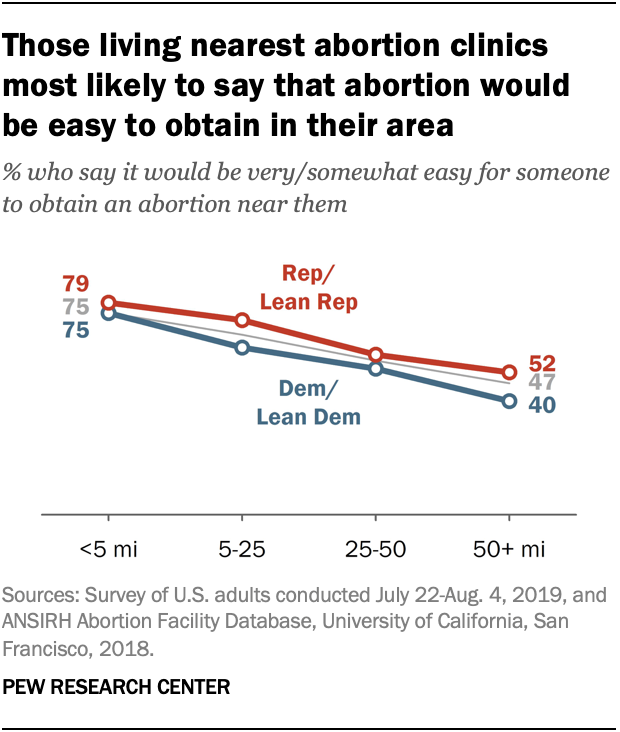 In contrast with opinions about abortion, people’s perceptions of difficulty or ease with which abortion can be obtained are correlated with actual distance to the nearest abortion clinic.

Note: See the questions used for this report, along with responses, and its methodology.

Do state laws on abortion reflect public opinion?
A majority of Americans think abortion will still be legal in 30 years, but with some restrictions
The new legal battlefield over abortion
About six-in-ten Americans say abortion should be legal in all or most cases
In the U.S. and Europe, women are about as likely as men to favor legal abortion