A growing number of states have legalized or decriminalized the possession of small amounts of marijuana. But the drug remains illegal in other states and under federal law – and police officers in the United States still make more arrests for marijuana offenses than for any other drug, according to FBI data. 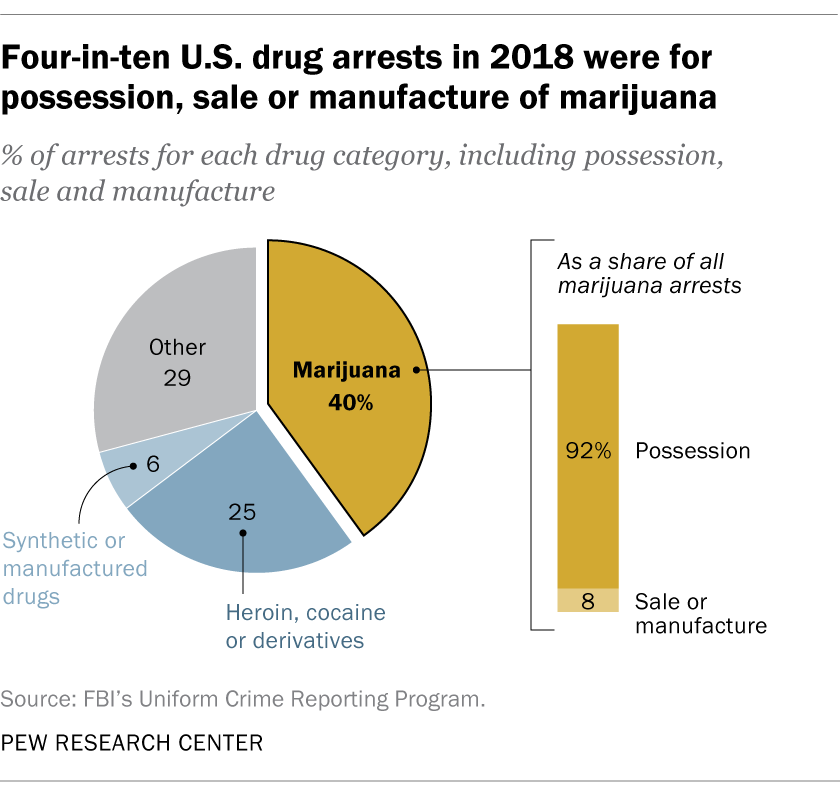 Police officers made about 663,000 arrests for marijuana-related offenses in the 50 states and the District of Columbia in 2018, amounting to 40% of the 1.65 million total drug arrests in the U.S. that year (the most recent for which data is available). The second-largest category of drug arrests involved “other” drugs (29%), followed by heroin, cocaine or their derivatives (25%) and synthetic or manufactured drugs (6%). These figures include arrests for possessing, selling or manufacturing each kind of drug. They are based on information submitted to the FBI from thousands of state and local law enforcement agencies, which make the vast majority of arrests in the U.S. each year.

It’s difficult to assess changes in the number of marijuana arrests over time because the list of state and local police agencies that submit arrest data to the FBI is not identical from year to year. But as a share of all reported drug arrests in the U.S., marijuana arrests have decreased in the last decade and are now at their lowest level in at least 20 years, down from 52% of all drug arrests in 2010.

As more states legalize or decriminalize marijuana – and as U.S. public opinion about the drug shifts – we wanted to explore the extent to which police still make arrests for marijuana offenses.

This analysis examines U.S. arrest data published by the FBI. To provide a national picture of arrests, the FBI collects statistics each year from thousands of law enforcement agencies around the country. In 2018, the most recent available year, more than 16,500 agencies submitted data to the FBI.

The analysis also includes an examination of current state laws regarding the use of marijuana. State legal information is drawn from the National Conference of State Legislatures.

The FBI does not publish state-by-state data on marijuana arrests, but patterns differ somewhat by region. In the West, 15% of all drug arrests were for marijuana-related offenses in 2018, compared with around half in the Northeast (53%), Midwest (50%) and South (49%). Marijuana is legal for recreational use in six of 13 Western states – Alaska, California, Colorado, Nevada, Oregon and Washington – but there were fewer marijuana arrests in the West even before the first state-approved recreational sales in the U.S. began in Colorado and Washington in 2012.

Recent changes in state laws mean that a growing share of Americans live in a jurisdiction where marijuana is legal or decriminalized, at least under state law. Several more states are expected to debate legalization proposals this year. 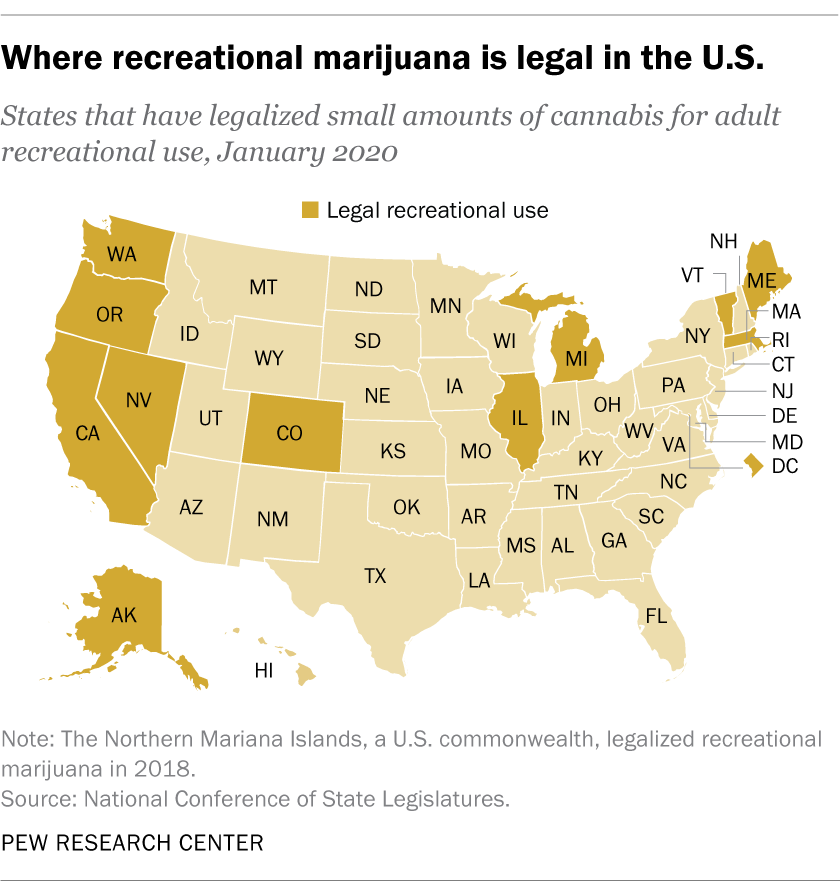 Illinois, the nation’s sixth most populous state, this month began allowing the sale of marijuana for recreational use. It joined 10 other states and the District of Columbia in legalizing small amounts of the drug for adult recreational use, according to the National Conference of State Legislatures (NCSL). Together, these jurisdictions are home to 29% of the U.S. adult population. To coincide with the new law, Illinois Gov. J.B. Pritzker issued more than 11,000 pardons to people previously convicted of low-level marijuana offenses in the state.

Another 26 states and the District of Columbia have decriminalized small amounts of marijuana. Decriminalization differs from legalization in that it is still against the law to possess the drug, but violations for small amounts intended for personal consumption tend to be civil or local infractions rather than state-level crimes that come with the possibility of incarceration.

Meanwhile, 33 states and the District of Columbia (as well as other U.S. jurisdictions including Guam, Puerto Rico and the U.S. Virgin Islands) have legalized marijuana for medical purposes, according to NCSL.

Of course, just because a state has legalized or decriminalized marijuana does not mean its residents are immune from being arrested for having it. Among other things, people in legal marijuana states can face arrest for possessing more than the authorized limit. And since marijuana remains illegal federally, U.S. law enforcement agencies such as the Drug Enforcement Administration can make arrests for marijuana offenses, too.