More people around the world have a favorable view of the United States than China, according to a 2019 Pew Research Center survey of 33 countries. The U.S. receives significantly more positive marks than China in 21 of these countries – mostly clustered in Europe and the Asia-Pacific – while China fares better than the U.S. in seven countries.

At the same time, the leaders of these two global powers do not inspire much confidence. People in many surveyed countries hold negative views of both Donald Trump and Xi Jinping.

When it comes to views of the U.S. and China, the starkest gap is in Japan, where people are 54 percentage points more likely to have a positive view of the U.S. than China (68% vs. 14%). People in South Korea, the Philippines and India are also at least 37 points more likely to see the U.S. than China favorably. Large gaps of this nature also appear in many Central and Eastern European nations, such as Poland, Hungary, Lithuania and the Czech Republic.

This analysis focuses on understanding the international image of the United States compared with that of China, as well as confidence in the leaders of both countries. The data featured here includes both comparisons of attitudes at the country level, such as countries where more people have positive attitudes of China than the U.S., as well as people’s individual level attitudes, such as what share of the public has positive attitudes of both the U.S. and China. The post also includes views on bilateral economic ties, along with questions about perceptions of China and the U.S. as a threat or an ally.

For this analysis, we used data from a survey conducted across 33 countries from May 18 to Oct. 2, 2019, totaling 36,923 respondents. The surveys were conducted face-to-face across Africa, Latin America, the Middle East and South Asia and on the phone in North America and the Asia-Pacific. Across Europe, the survey was conducted over the phone in France, Germany, the Netherlands, Spain, Sweden and the UK, but face-to-face in Central and Eastern Europe, Italy, Ukraine and Russia. U.S. data and analysis are excluded from this report.

Here are the questions used for the report (as released in December 2019 and January 2020), along with responses, and its methodology. 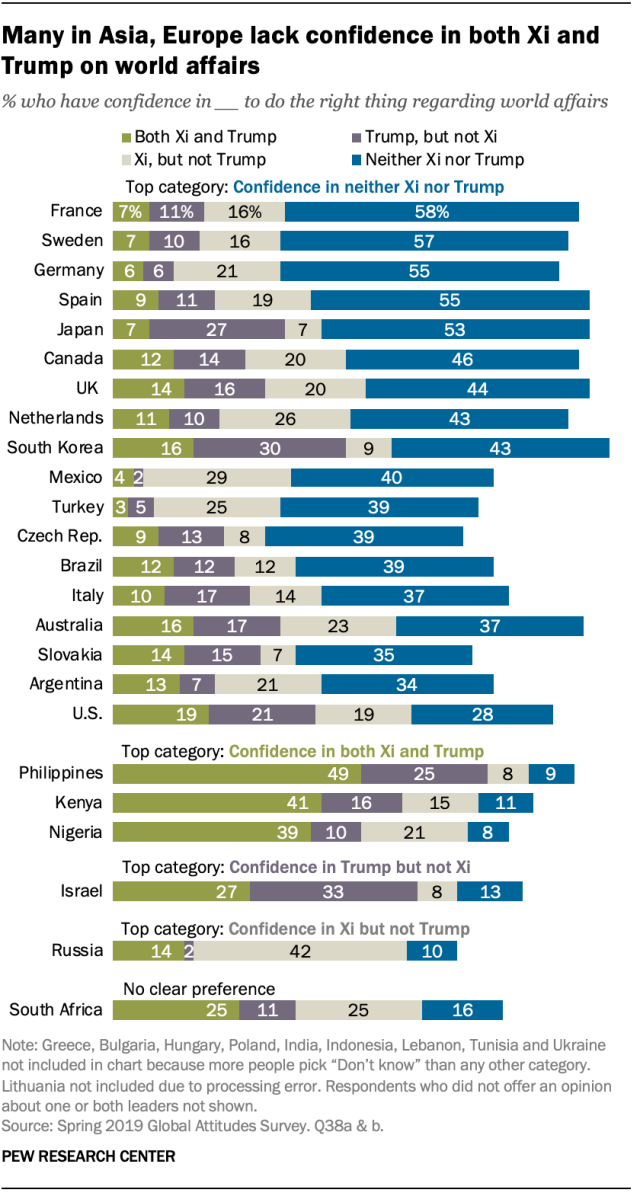 In five nations – Sweden, France, Germany, Turkey and the Netherlands – people tend to be negative about both the U.S. and China.

In 18 of the 33 countries where the question was asked, publics say they have confidence in neither Xi nor Trump on matters of global affairs. This simultaneous negativity is most common in Western European nations and North America, especially in France, Sweden, Germany and Spain, where majorities are not confident in either leader.

Only in Russia do more people say they have confidence in Xi but not in Trump, while the opposite tends to be true in Israel. People in the Philippines, Kenya and Nigeria tend to be confident in both leaders at the same time. 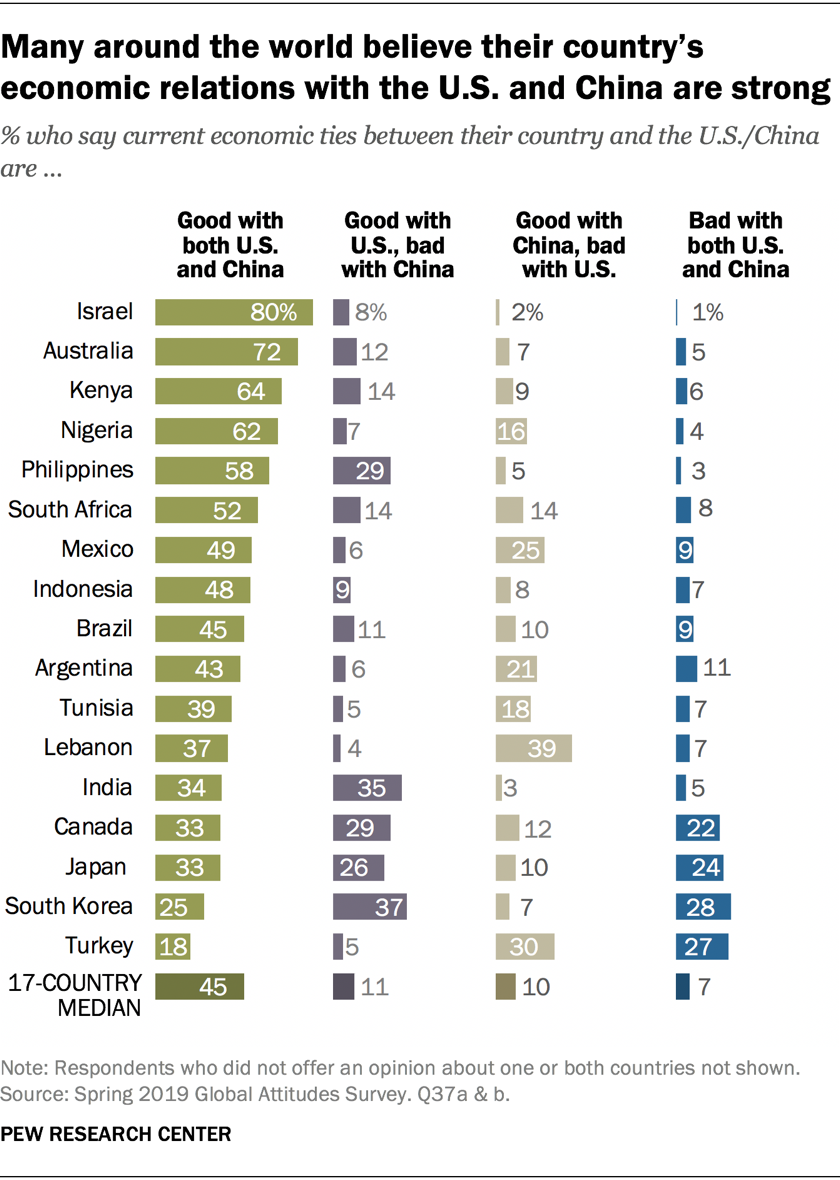 In many of the countries surveyed, people also tend to think their nation has positive economic relations with both the U.S. and China. For example, eight-in-ten Israelis give a positive evaluation of the economic ties between their country and China as well as the U.S., and at least half or more say the same in Australia (72%), Kenya (64%), Nigeria (62%), the Philippines (58%) and South Africa (52%).

South Korea stands out as the only country in which a plurality of people say current economic ties with the U.S. are positive, while those with China are negative (37%). In contrast, Lebanese (39%) and Turks (30%) are more likely to see positive economic relations with China and not the U.S., though these publics are relatively divided.

Across the 17 countries where the question was asked, no more than around a quarter of people in any country say economic ties with both China and the U.S. are poor – though this sense is most common in South Korea (28%), Turkey (27%), Japan (24%) and Canada (22%). 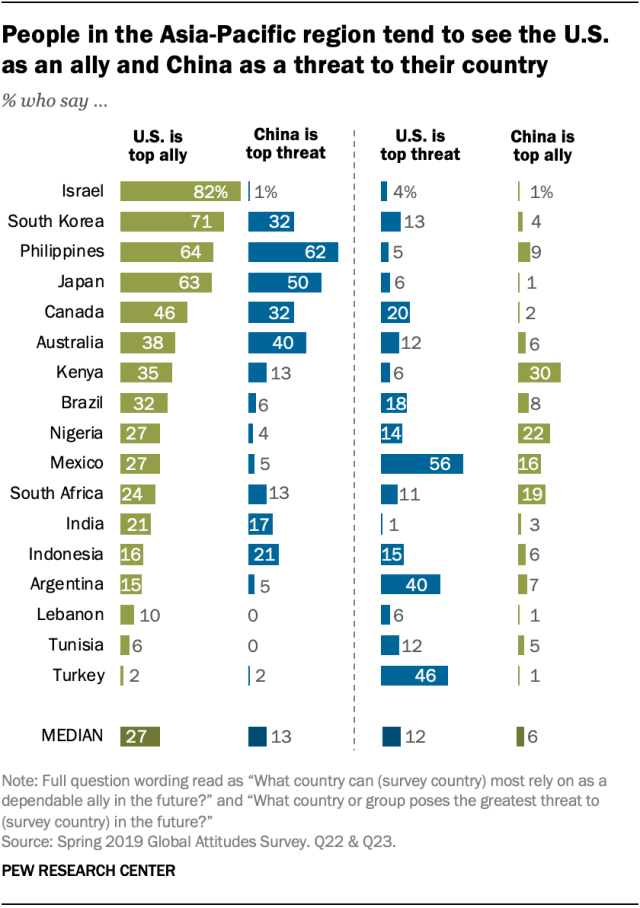 Despite these views, few people tend to see the U.S. and China locked in a zero-sum competition when it comes to who is their greatest threat or most dependable ally.

For example, people were asked an open-ended question about which country will be their own nation’s closest ally in the future and which country or group represents the greatest threat to their nation. In most countries, there is little relationship between seeing China as a threat and the U.S. as an ally – or vice versa.

But the Asia-Pacific region stands out. About a third or more in South Korea, the Philippines, Japan and Australia say the U.S. is their most reliable ally and that China is their greatest threat. Very few in the six Asia-Pacific countries surveyed hold the opposite view.