Guns are deeply ingrained in American society. The Second Amendment to the U.S. Constitution gives Americans the right to bear arms, and three-in-ten American adults personally own a gun. Most of these gun owners say the right to own firearms is essential to their own personal sense of freedom.

At the same time, gun violence – from big-city murders to mass shootings – has spurred debate in Congress and state legislatures over proposals to limit Americans’ access to firearms. Counting murders and suicides, nearly 40,000 people died of gun-related violence in the United States in 2017, the highest annual total in decades.

Here are seven key findings about Americans’ experiences with and attitudes toward guns, drawn from recent Pew Research Center surveys and other data sources.

Three-in-ten American adults (30%) say they personally own a gun, and an additional 11% say they live with someone who does, according to a Pew Research Center survey conducted in March and April 2017. Whether or not they personally own a gun, Americans have broad exposure to firearms: Nearly half of U.S. adults (48%) grew up in a household with guns, nearly six-in-ten (59%) have friends who own guns and around seven-in-ten (72%) have fired a gun at some point in their lives – including 55% of those who have never personally owned a gun.

Among Americans who own a gun, nearly two-thirds (66%) say they own more than one, including 29% who own five or more. A large majority of gun owners (72%) own a handgun or pistol, while 62% own a rifle and 54% own a shotgun. About three-quarters of gun owners (73%) say they could never see themselves not owning a gun.

2Protection tops the list of reasons why gun owners have a gun, according to the same survey. Two-thirds of gun owners (67%) say this is a major reason why they own a firearm. Considerably smaller shares say hunting (38%), sport shooting (30%), gun collecting (13%) or their job (8%) are major reasons. While men and women are about equally likely to cite protection (65% and 71%, respectively) as a major reason they own a gun, women are more likely than men to cite protection as the only reason (27% of women vs. 8% of men). Higher shares of male gun owners than female gun owners point to hunting (43% vs. 31%) and sport shooting (34% vs. 23%) as major reasons for gun ownership.

Regardless of whether they live in an urban, suburban or rural area, Americans are much more likely to cite protection than other considerations as a major reason for owning a gun. Rural gun owners, however, are far more likely than their urban and suburban counterparts to say hunting is a major reason why they own a firearm (48% of rural gun owners say this, compared with 34% of suburbanites and 27% of urbanites). 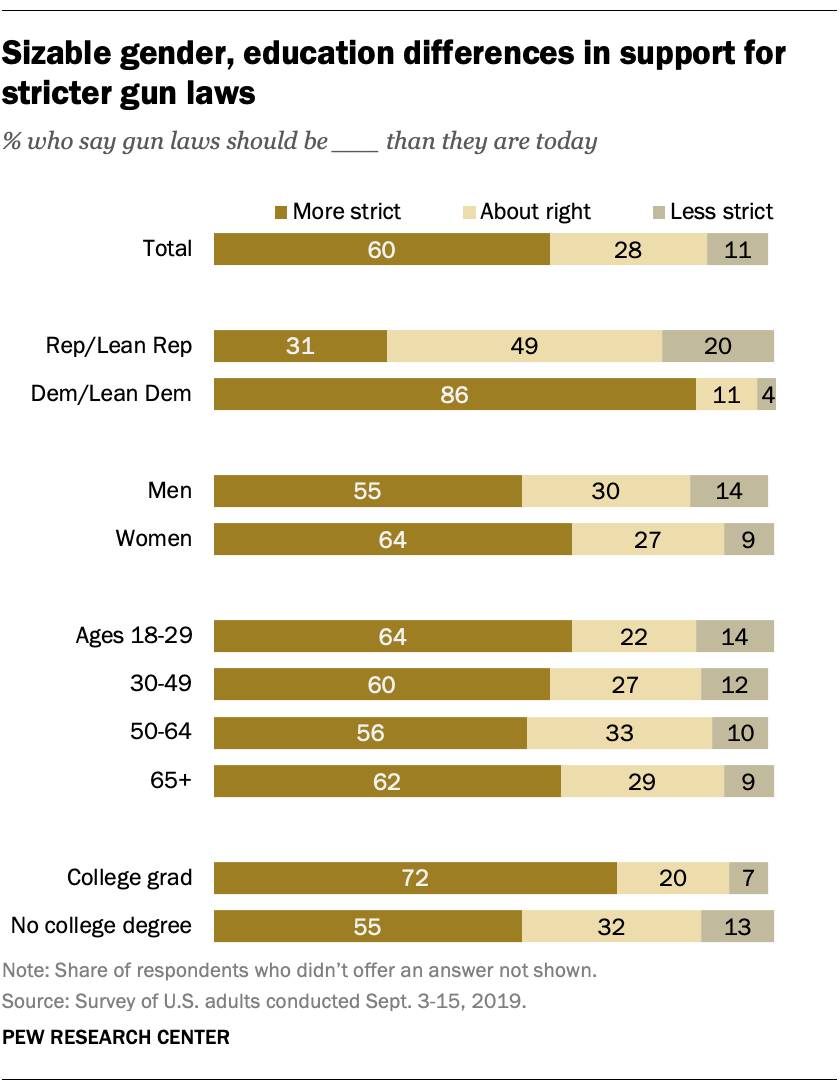 A majority of Americans say gun laws should be stricter. The share of Americans who say gun laws in the U.S. should be made stricter has increased from 52% in 2017 to 60% this year, according to a survey conducted in September 2019. Smaller shares say U.S. gun laws are about right (28%) or should be less strict (11%). Yet these views differ sharply by party: 86% of Democrats and Democratic-leaning independents say gun laws should be stricter, while 31% of Republicans and GOP leaners say the same. For their part, Republicans are much more likely than Democrats to say gun laws are about right (49% vs. 11%) or should be less strict than they are today (20% vs. 4%).

There are also gender and educational differences in these views. Nearly two-thirds of women (64%) favor stricter gun laws, compared with 55% of men. Adults with at least a four-year college degree are more likely than those who have not completed college to support stricter laws (72% vs. 55%).

Partisans are also deeply divided over whether it is more important to control gun ownership or protect gun rights, according to the September survey. Eight-in-ten Republicans say it’s more important to protect the right of Americans to own guns than it is to control gun ownership, while just 21% of Democrats say the same. That 59 percentage point partisan gap is up from a 29-point gap in 2008.

Other proposals bring out stark partisan rifts. Democrats, for example, are much more likely than Republicans to favor banning assault-style weapons (88% vs. 50%) and high-capacity magazines (87% vs. 54%).

Gun ownership among partisans also affects Americans’ views of gun policy proposals, according to a fall 2018 survey. Republicans who didn’t own a gun, for example, were much more likely than GOP gun owners to favor banning assault-style weapons (65% vs. 31%) and high-capacity magazines (63% vs. 35%). Among Democrats, gun owners were more than twice as likely as those who didn’t own a gun to favor expanded concealed carry (50% vs. 21%).

Separately, about a quarter of Americans (23%) say someone has used a gun to threaten or intimidate them or someone in their family. There is again a racial gap: About a third of blacks (32%) say this, compared with 20% of whites. About a quarter of Hispanics (24%) say this has happened to them or their family members. 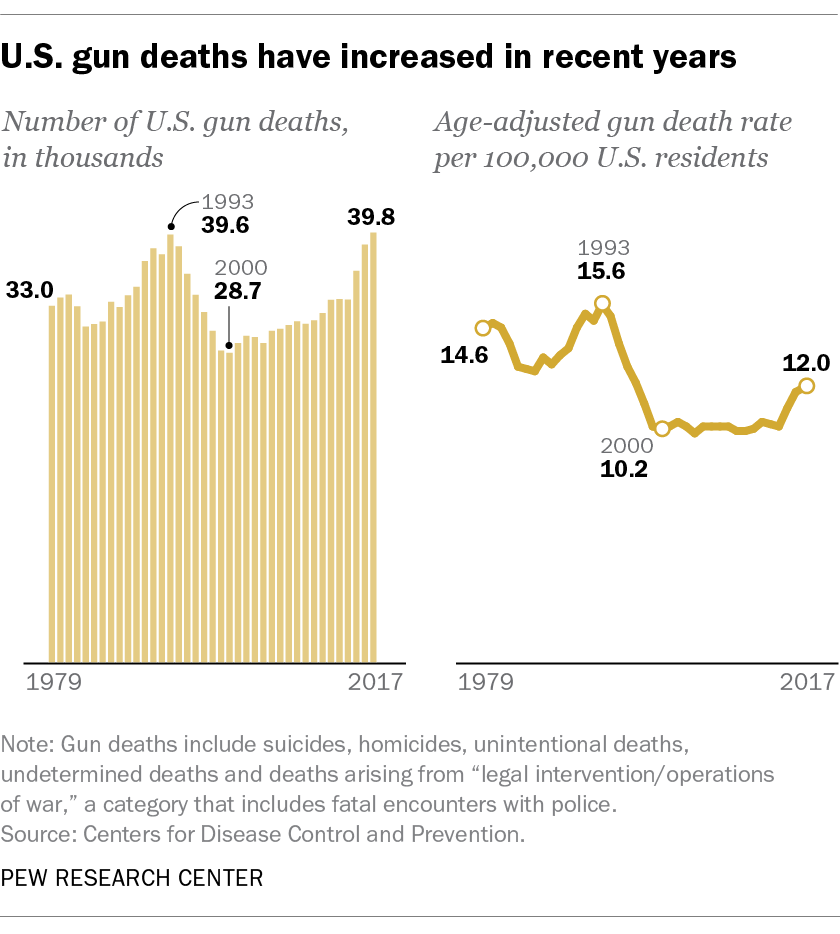 2017 saw more gun deaths in the U.S. than any year in decades, according to data from the Centers for Disease Control and Prevention. The nearly 40,000 Americans who died of gun-related injuries in 2017 marked a 19% increase from 2012 and the highest annual total since the mid-1990s. The increase in gun deaths over five years included a 15% rise in suicides involving a gun and a 25% rise in murders involving a firearm. (The CDC data includes other categories as well, such as unintentional gun deaths and those involving police or other law enforcement agents.)

This is an update of a post originally published on Jan. 5, 2016, and written by Hannah Fingerhut, then a research analyst at Pew Research Center.