More than half of married couples in the United States say sharing household chores is “very important” to a successful marriage. But when it comes to grocery shopping and cooking, women tend to say they’re the ones usually doing the work, according to a time-use survey sponsored by the Bureau of Labor Statistics (BLS). 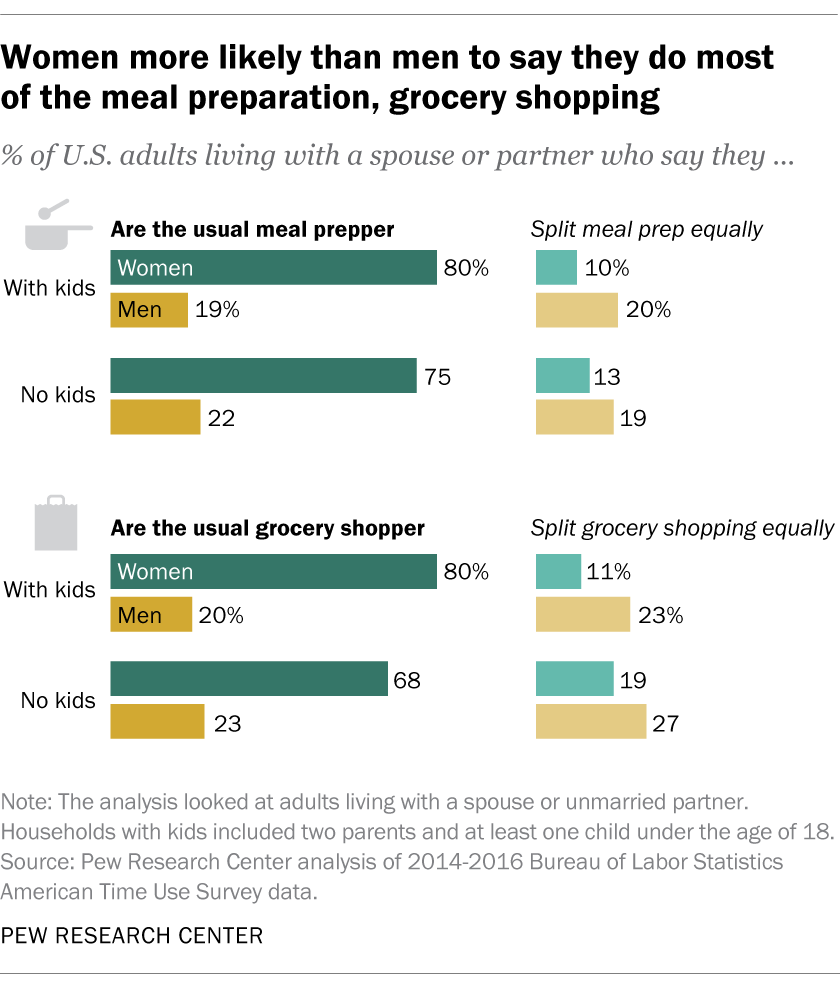 In U.S. households consisting of married or cohabiting parents and one or more children under the age of 18, 80% of mothers say they are the household member who usually prepares the meals – the same as the share who say they are the primary grocery shopper, according to a Pew Research Center analysis. Some 71% of moms say they primarily handle both chores.

Dads are about twice as likely as moms to say these chores are split equally: 20% of dads say meal preparation is split equally, compared with 10% of moms. There is a similar pattern for grocery shopping (23% vs. 11%).

Given that moms are much more likely than dads to say they are the primary meal preparers, it’s not surprising that they spend more time than dads, on average, on meal preparation – which includes food and kitchen cleanup after meals.

Moms spend an average of 68 minutes per day on meal preparation, vs. 23 minutes for dads. Among parents who usually prepare the meals, mothers spend more than an hour (about 75 minutes) on average on it per day, compared with 43 minutes among fathers. The gender difference persists among parents who say they do not usually handle meal preparation: Mothers in this category spend an average of 30 minutes on meal prep daily, while fathers spend around 15 minutes.

Among parents who grocery shop, meanwhile, the average length of time spent at the grocery store in a day is about the same for both moms and dads (roughly 45 minutes each). 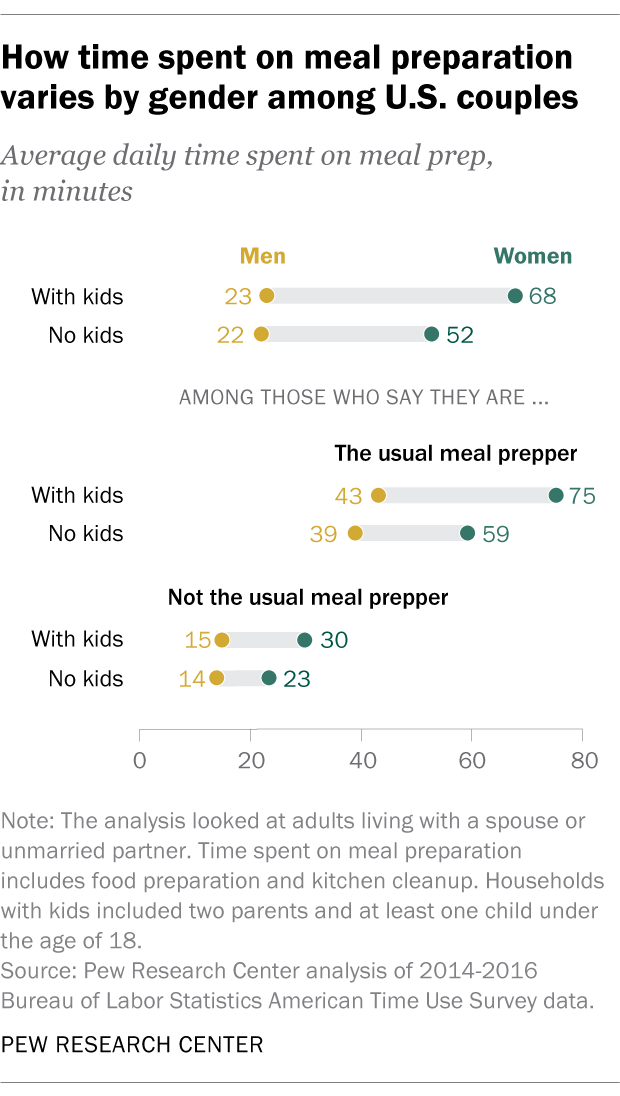 In households consisting of two married or cohabiting adults and no children, men and women fill less of their time with these chores – but women still report spending more time in the kitchen. Overall, women spend 52 minutes a day on meal prep, vs. 22 minutes for men.

Women in this group who usually prepare meals spend around an hour a day (59 minutes) on average on prep, while men who usually do this spend an average of 39 minutes per day on these tasks.

Over the past 50 years, American women (particularly mothers) have increased the amount of time they spend in paid work, and men (especially fathers) have taken on more obligations at home. Still, on average, U.S. women spend fewer hours in paid work than men, which may partially explain the gender imbalance in time spent on food prep and grocery shopping.

This analysis is based on data from the Eating and Health (EH) Module of the American Time Use Survey (ATUS). The ATUS has been sponsored by the Bureau of Labor Statistics and annually conducted by the U.S. Census Bureau since 2003. The ATUS produces a nationally representative sample of respondents, drawn from the Current Population Survey.

The analysis looked at households with two married or cohabiting adults. Although the analysis focuses on opposite-sex couples, it may include a small number of same sex couples.

BLS and the Census Bureau worked with the U.S. Agriculture Department’s Economic Research Service, the Food and Nutrition Service and the National Cancer Institute to conduct the EH Module, a supplement to the ATUS fielded in 2006-2008 and 2014-2016.

To increase sample size, multiple years of data were combined: Analyses are based on respondents in the 2014-2016 modules.

These time diaries track in detail how Americans spend their time, focusing on each respondent’s primary activity (i.e., the main thing they were doing) sequentially for the prior day, including the start and end times for each activity. The 2014-16 EH Module asks ATUS respondents about topics including secondary eating; soft drink consumption; grocery shopping preferences and fast food purchases; meal preparation and food safety practices; and food assistance participation.