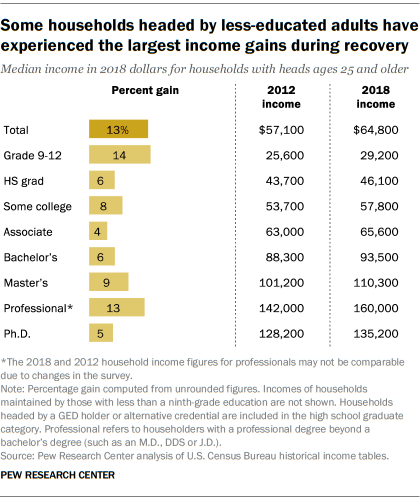 Household incomes in the United States have rebounded from their 2012 bottom in the wake of the Great Recession. And for the most part, the typical incomes of households headed by less-educated adults as well as more-educated adults have increased, according to newly released Census Bureau data.

A note about households headed by those with professional degrees

In 2018, all households headed by those ages 25 and older generated $11.2 trillion in income. Households headed by adults without a bachelor’s degree earned $5.1 trillion, or 45% of the total. This compares with 50% of aggregate household income in 2012 and an even higher share – 63% – in 1991. (These aggregate income figures are based on a Census survey of households and are generally less than aggregate income as measured in the National Income and Product Accounts.)

Some of the waning economic clout of less-educated households is due to their dwindling numbers: In 2018, 63% of households were headed by adults without a bachelor’s degree, down from 67% in 2012 and 77% in 1991.