Nearly all U.S. teens (95%) say they have access to a smartphone – and 45% say they are “almost constantly” on the internet. That amount of screen time has raised concerns from parents, educators and policymakers across the country, and even many teens worry they use their phone too much.

So, what exactly are teens doing with their cellphones? 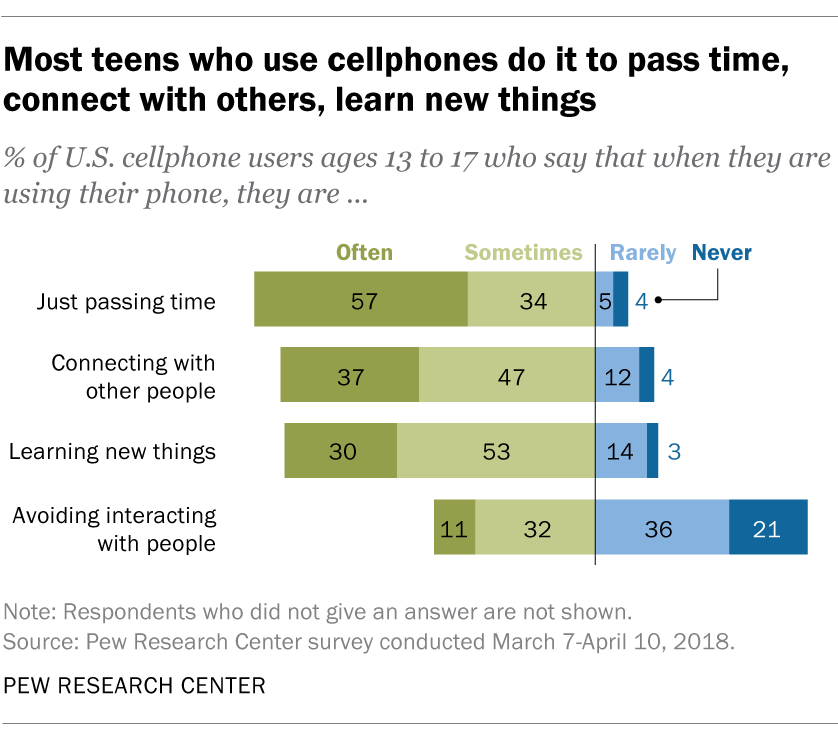 The vast majority of cellphone-using teens say their phone is a way to just pass time, with nine-in-ten saying they often or sometimes use it this way, according to a Pew Research Center survey of 13- to 17-year-olds conducted in 2018. Similarly large shares of teen cellphone users say they at least sometimes use their phone to connect with other people (84%) or learn new things (83%).

Teen boys and girls are about equally likely to say they often or sometimes use their devices to connect with other people (85% vs. 83%, respectively), just pass the time (both 90%) or learn new things (79% vs. 87%). 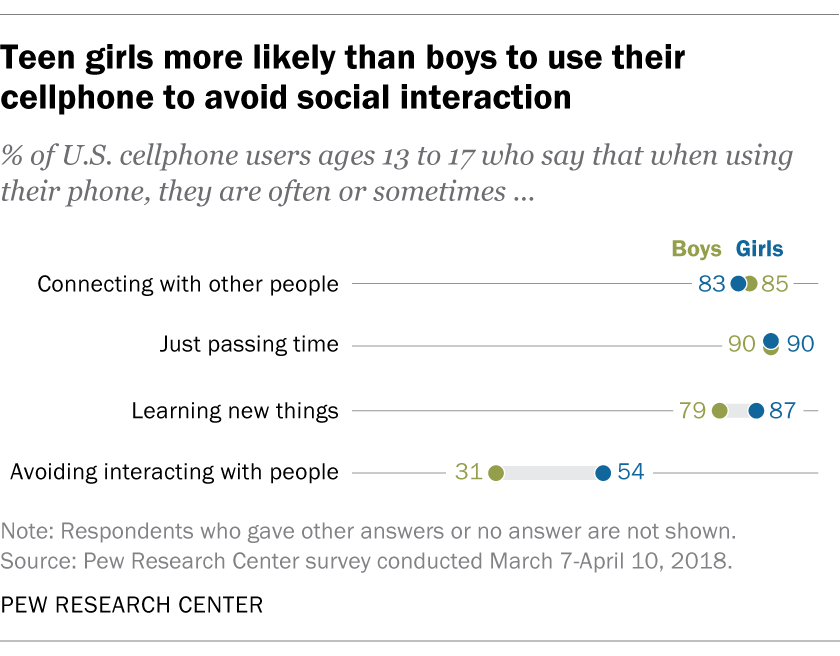 But while phones are a way for teens to connect with other people, they can also be a way to avoid face-to-face interactions. Roughly four-in-ten teen cellphone users (43%) say they often or sometimes use their phone to avoid interacting with people. This is truer for teen girls than teen boys. Roughly half of teen girls who have access to a cellphone (54%) say they often or sometimes use their mobile device to avoid social interaction, while 31% of teen boys report doing the same.

For many teens, phones have become a vital part of their daily routine, and their relationship with their device can be complicated.

This same survey found that around seven-in-ten teens (72%) say they often or sometimes check for messages or notifications as soon as they wake up. More than half of teens (56%) associate the absence of their phone with at least one of three emotions: loneliness, being upset or feeling anxious. Girls are more likely than boys to feel anxious or lonely without their phone.

How having smartphones (or not) shapes the way teens communicate
How parents feel about – and manage – their teens’ online behavior and screen time
10 tech-related trends that shaped the decade
Manners 2.0: Key findings about etiquette in the digital age
Nearly one-in-five teens can’t always finish their homework because of the digital divide
Defining generations: Where Millennials end and Generation Z begins
25% in U.S. see at least some truth in conspiracy theory that COVID-19 was planned
Are you in the American middle class? Find out with our income calculator
Americans Who Mainly Get Their News on Social Media Are Less Engaged, Less Knowledgeable
Americans Fault China for Its Role in the Spread of COVID-19