Atheists, agnostics and those who describe their religion as “nothing in particular” all fit into the broad category “religiously unaffiliated.” But there are differences among them: Atheists and agnostics, for instance, know more about religion than those in the “nothing in particular” group, according to a recent Pew Research Center survey designed to measure the U.S. public’s knowledge about a wide range of religious topics.

Here are five key findings from our analysis of responses given by the religiously unaffiliated, also known as religious “nones”: 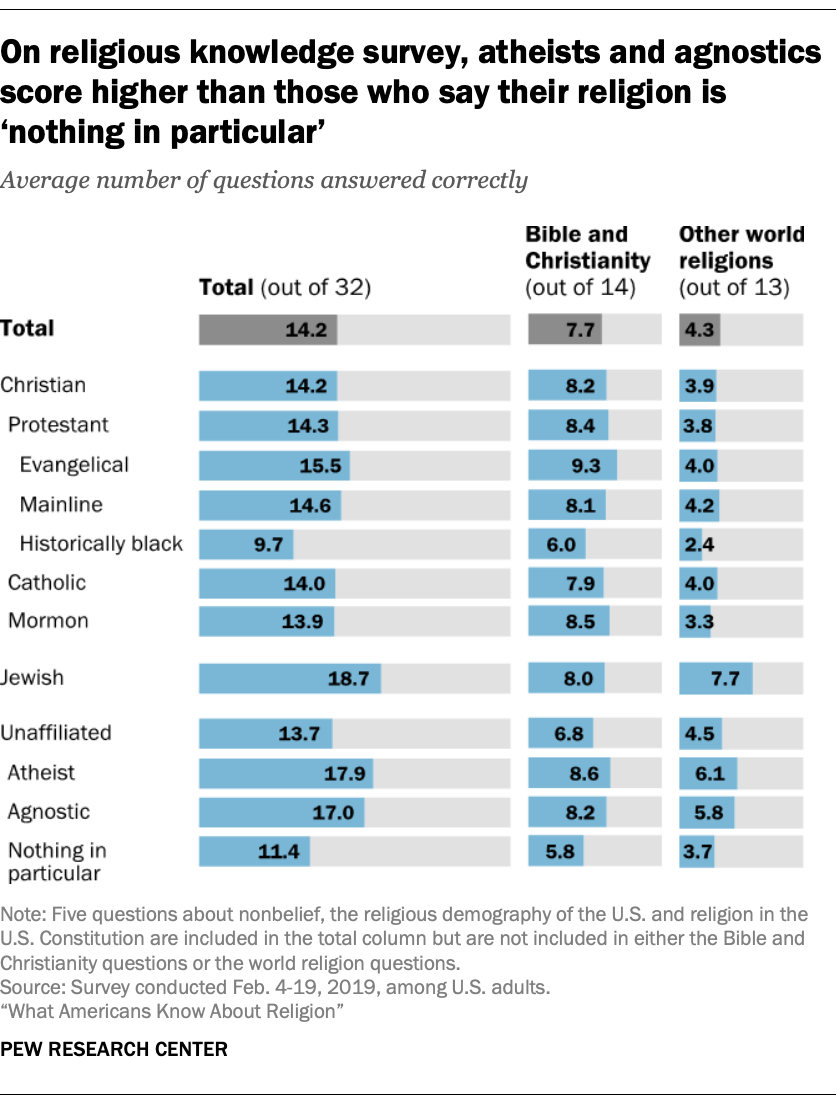 2Like other Americans, “nones” are fairly knowledgeable about some of the basics of Christianity. Majorities of atheists, agnostics and people who say their religion is “nothing in particular” know that Easter commemorates the resurrection of Jesus (and not the Crucifixion, Ascension to heaven or Last Supper). Majorities in all three groups also know that the Christian doctrine of the Trinity holds that there is one God in three persons – Father, Son and Holy Spirit. Roughly three-quarters of religious “nones” in the U.S. were raised as Christians, according to Pew Research Center’s 2014 Religious Landscape Survey.

3Atheists (and to a lesser extent, agnostics) are on a par with Catholics and Protestants in correctly answering questions about Catholicism and Protestantism. Seven-in-ten atheists and agnostics know that Catholicism teaches that purgatory is the place where souls are purified before entering heaven – about the same share as Catholics who correctly define purgatory (71%). And roughly half of atheists (47%) know that Catholicism teaches that the bread and wine used for Communion actually become the body and blood of Jesus Christ, equal to the 50% of Catholics who know this.

When asked to pick the tradition (Protestantism, Catholicism, both or neither) that believes salvation comes through faith alone – a key Protestant teaching that’s known as “sola fide” – roughly equal shares of atheists (25%) and Protestants (28%) respond correctly. Among those whose religion is “nothing in particular,” just 39% answer the purgatory question correctly and 10% know that Protestantism teaches that salvation comes through faith alone.

The only group that outperforms atheists and agnostics on the survey’s questions about world religions other than Christianity is Jews, who correctly answer an average of 7.7 of the survey’s 13 questions on these topics.

Atheists are more likely than any other religious group to correctly answer the survey’s question about religion and the U.S. Constitution. About half of atheists (55%) correctly say that the Constitution specifies that “no religious test” is necessary to hold public office. That’s by far the highest correct response rate, ahead of agnostics (41%) and Jews (38%), while 23% of those in the “nothing in particular” category correctly answer this question.