How much do people feel that what happens to members of their own racial or ethnic group affects what happens in their own lives? What about what happens to other groups? Known among researchers as “linked fate,” this sense of connectedness was originally used to explain persistent Democratic voting bloc patterns among black Americans. More recently it has been used to examine not only how closely connected black Americans feel toward one another, but also connectedness between and among other racial groups. 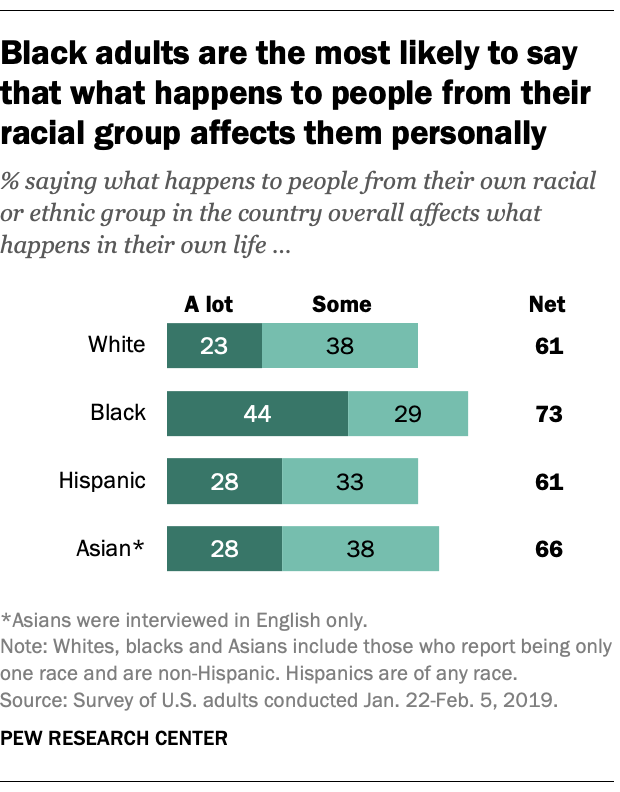 A recent Pew Research Center survey finds that racial or ethnic group membership, education and partisanship are the most important determinants of linked fate within and across racial groups. For blacks and Hispanics specifically, experiences of discrimination increase the likelihood of saying that what happens to the other group would affect them.

Among Hispanics, about three-in-ten (28%) say that what happens to other Hispanic people in the U.S. impacts them a lot. This is more likely among Hispanics under 50 (31%) than among those 50 and older (21%). U.S.-born Hispanics (27%) are about as likely as those born outside the U.S. (29%) to express a sense of linked fate with other Hispanics. This sense also does not vary by gender or education.

Likewise, 28% of Asians say that what happens to other Asians in the U.S. affects what happens in their own life a lot. Due to sample limitations, the views of Asians couldn’t be analyzed separately by categories such as gender, age or education. (For more information, see “A note about the Asian sample.”)

Views of linked fate across racial and ethnic groups

White adults with a bachelor’s degree or more education are more likely than whites with less education to say what happens to black (51% vs. 40%), Hispanic (47% vs. 39%) and Asian (36% vs. 28%) people in this country affects what happens in their own life.

Similarly, black people with at least a bachelor’s degree have a stronger sense of linked fate to whites (60% vs. 44%) and Hispanics (59% vs. 46%) than their less educated counterparts. Black adults with some college experience (40%) are also more likely than those with a high school diploma or less education (28%) to express a sense of linked fate with Asians. Education is not associated with how strongly connected Hispanic adults feel toward black or Asian people. However, 54% of Hispanics with a bachelor’s degree or more education say that what happens to white people will affect their own lives, compared with 43% of Hispanics with less education.

A sense of linked fate is also shared among blacks and Hispanics when members of both racial and ethnic groups have experienced racial discrimination. Black people who experience racial discrimination at least from time to time (55%) are more likely than those who do not (30%) to say that what happens to Hispanics will impact their lives at least some. They are also more likely (38%) than blacks who do not experience discrimination (21%) to report that what happens to Asians will impact them. 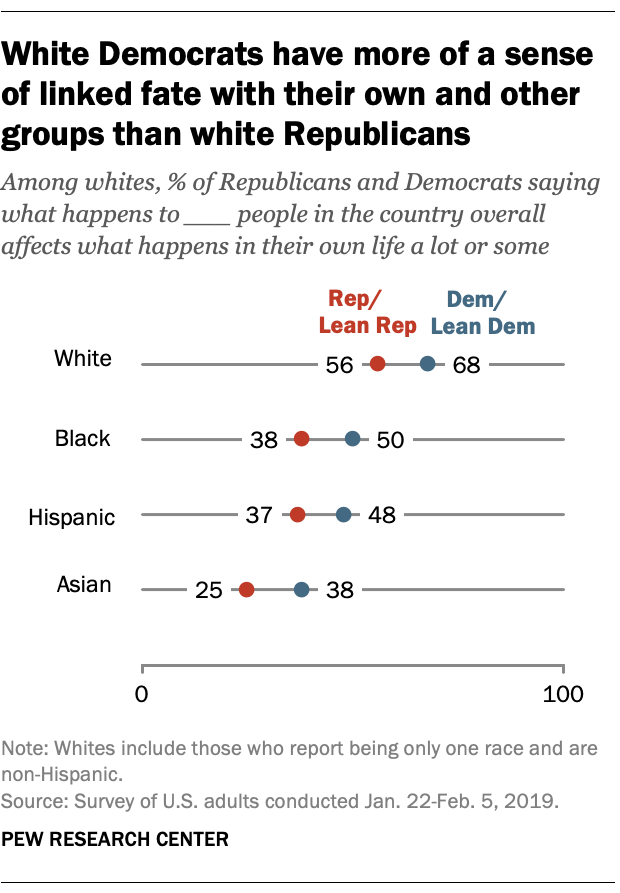