New York recently became the fifth state – after California, Maine, Mississippi and West Virginia – to enact a law requiring children in public school to be vaccinated unless they have a valid medical reason. Legislatures in several other states are considering similar legislation. Most states (44), however, allow children to be exempt from vaccinations due to religious concerns, according to a Pew Research Center analysis. And one state, Minnesota, allows for a broader exemption based on personal beliefs but does not explicitly mention religion.

The action in New York came after the state became the center of a nationwide measles outbreak that has sickened more than 1,000 Americans in 28 states so far this year. Many of the cases in New York have been in Orthodox Jewish communities where vaccination rates are low. 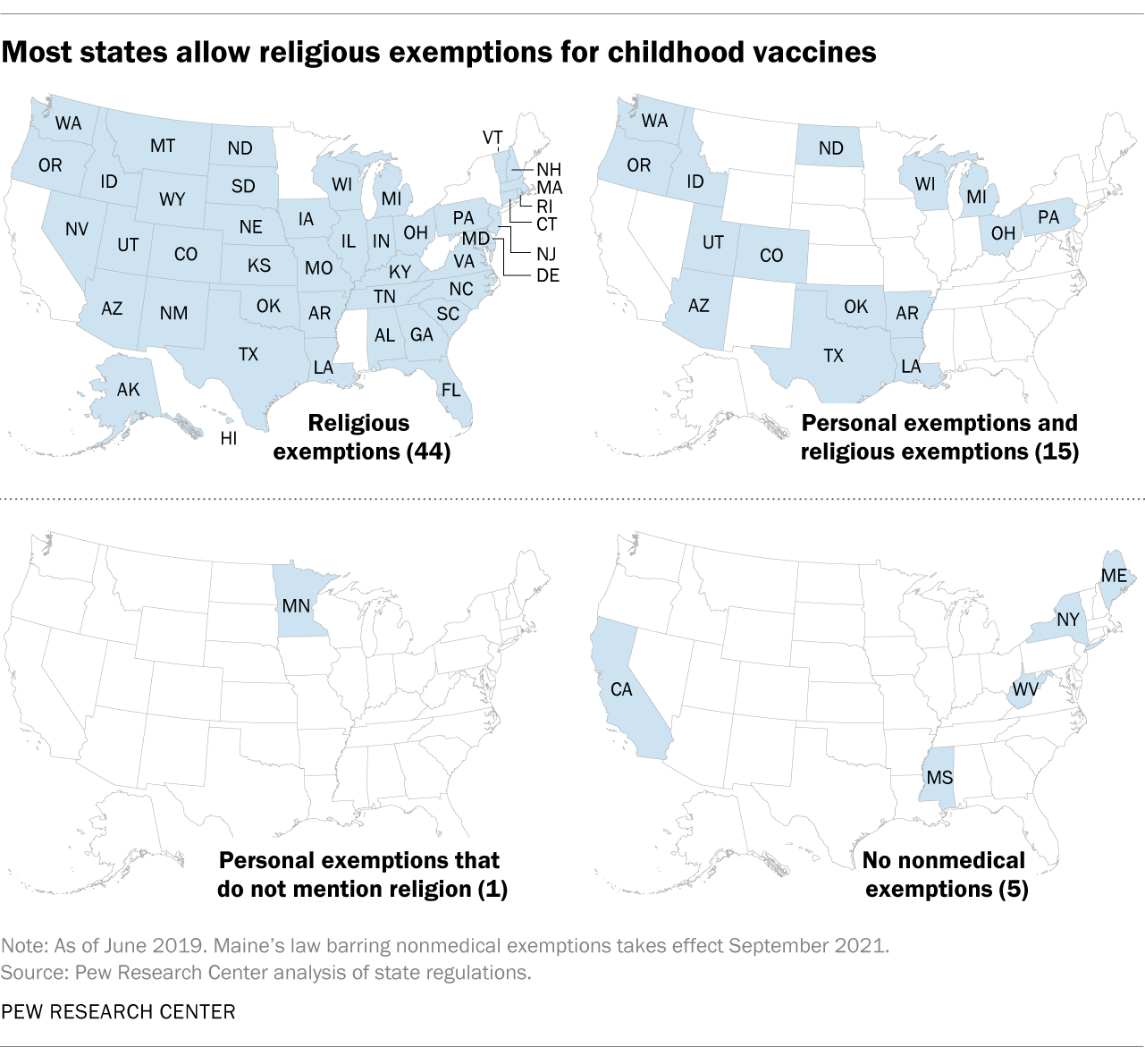 Supporters of ending all but medical exemptions contend that vaccines are safe and that allowing children to go unvaccinated puts many people at risk for measles, rubella and other diseases. Opponents say the laws infringe on parental rights, as well as religious and other personal liberties.

All states require children to receive certain vaccinations before entering public school, but every state also allows exemptions for children who cannot be vaccinated for medical reasons. Among the states that specifically allow religious exemptions to vaccinations, 15 also allow exemptions for any type of nonreligious personal belief, according to the Center’s analysis.

(This analysis counts Maine as not allowing nonmedical exemptions, though its newly signed law doesn’t take effect until September 2021. Washington state is included as allowing personal exemptions, but as of July 28 the measles, mumps and rubella vaccine may only be waived for medical or religious reasons. Not counted is the District of Columbia, which allows religious, but not personal, exemptions.)

While a number of states have banned nonmedical exceptions, others have imposed rigorous requirements for parents seeking nonmedical exemptions for their children. For example, in Nebraska, parents must submit “an affidavit signed by a legally authorized representative stating that the immunization conflicts with the tenets and practices of a recognized religious denomination of which the student is a member.”

Several states, including Montana and Delaware, require notarized statements. And many states require that parents look at educational material about the safety and importance of vaccines, including Oregon, which requires parents to obtain a “vaccine education certificate,” either from a health care provider or by viewing an online seminar, before their child can be exempted.

At least three states also specify that “philosophical” arguments must not be cited as a basis for granting a religious exemption. For instance, Alaska law states that “statements indicating philosophical or personal opposition to vaccines will invalidate religious exemption documentation.” But in many states it’s impossible to know what grounds people cite in applying for religious exemptions, since most states allowing such an exemption do not require parents to provide a detailed reason for claiming it.

Even though 44 states allow religious exemptions for vaccinations, researchers and journalists have struggled to identify a single major U.S. religious group that advocates against vaccination for children. When some of these exemptions were first put in place in the 1960s and 1970s, they were added “at least in part owing to the lobbying efforts of the Christian Science Church,” according to an article in the Annual Review of Public Health by Douglas Diekema, a doctor and bioethicist at Seattle Children’s Hospital. But although the Christian Science Church is known for its practice of healing through prayer, it does not advocate that its members refrain from vaccinating children.

Some components of vaccines have prompted other religious concerns. Certain vaccines – including some measles, mumps and rubella (MMR) and varicella, or chickenpox, vaccines – contain gelatin, which is derived from pigs. Many Jews and Muslims do not consume swine products. However, religious authorities from Judaism and Islam have said the vaccines are permissible.

The Catholic Church has sanctioned the “temporary” use of vaccines, such as some rubella vaccines, which may be developed from descendant cells of tissue from aborted fetuses. But the church also encourages followers to seek out alternative vaccines that do not use such cells.