From the early stages of his campaign for the White House, U.S. President Donald Trump has referred to China as “an economic enemy” of the United States and even declared, “I win against China.” But when it comes to public opinion around the globe, positive views toward China don’t necessarily translate into negative views of the U.S. or vice versa, a Pew Research Center analysis shows.

Across 25 countries surveyed in 2018, at least a plurality of respondents in nine nations have favorable views of both the U.S. and China. For example, around half of adults in Kenya, the Philippines and Nigeria give positive marks to China and to the U.S. These nine countries include traditional American allies like Israel and the United Kingdom, as well as some of China’s neighbors in the Asia-Pacific region, including Indonesia and Australia.

People in six countries, including Germany, France and Canada, are more likely to hold concurrently negative views of both the U.S. and China.

Russia and Tunisia are the only nations where people are more likely to favor China than the U.S. On the other hand, South Korea and Japan, two countries with historical animosities against China, are the only two surveyed nations where pluralities favor the U.S. but not China. 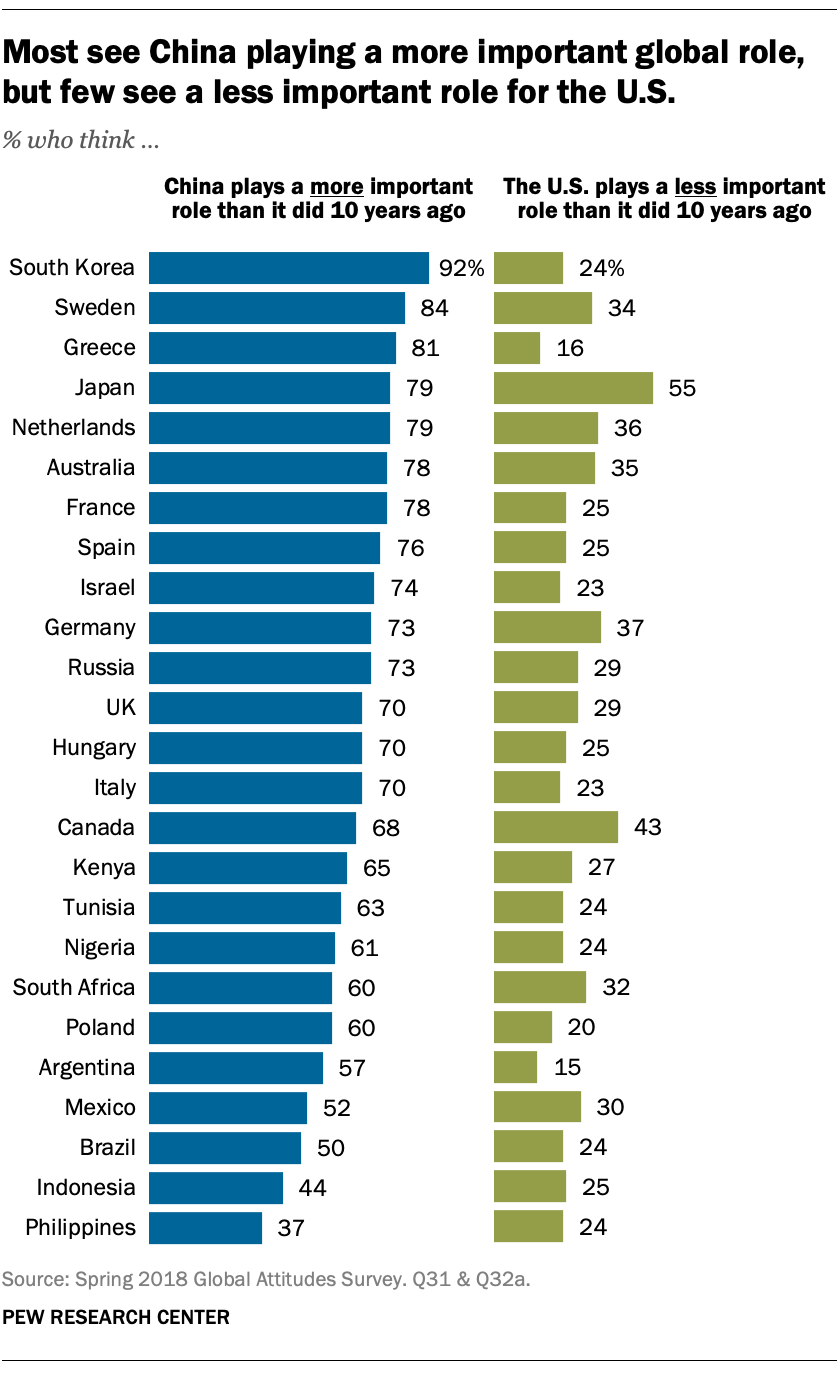 Although most people in the nations surveyed see China playing a more important role today than it did a decade ago, that does not mean they simultaneously see decreased U.S. influence. In all but two nations, half or more say China’s power has increased, with a median of 70% across all surveyed nations saying this. When asked about the international role of the U.S., people in the countries polled most often say the U.S. has grown in power and influence (31%) or remained about the same (35%). A median of just 25% say America’s global role has diminished over the past 1o years. But this view only weakly correlates to the perception that China has gained importance over the same period.

Sweden is an example of this pattern. A large majority of Swedes (84%) say China’s importance has grown over the past 10 years. Far fewer (20%) say the same of the U.S. – and, in fact, around a third (34%) say U.S. power and influence has decreased during this time.

In 17 countries, majorities or pluralities say they have confidence in neither Trump nor Xi to do the right thing when it comes to world affairs. This includes nine of the 10 European nations in the survey and all three Latin American publics surveyed. This pattern is especially strong in Spain, France and Brazil, where about six-in-ten or more lack faith in both leaders.

A plurality of Tunisians voice confidence in Xi but have little confidence in Trump. (Notably, Xi has emphasized strengthening ties between his nation and Tunisia in recent months.) Only in Israel – a country the U.S. president has made a top priority in his foreign policy agenda – do a plurality view Trump favorably and Xi negatively.