Lesbian, gay and bisexual Americans are by some measures less religious than heterosexual or straight adults, according to a new analysis of data from Pew Research Center’s 2014 Religious Landscape Study.

For starters, gay, lesbian and bisexual adults are substantially less likely than straight adults to affiliate with a religious group. Four-in-ten (41%) identify as atheist, agnostic or “nothing in particular,” compared with just 22% of straight adults who say the same. (The survey asked respondents whether they identify as lesbian, gay, bisexual or straight but did not ask about other identities related to gender and sexuality.) 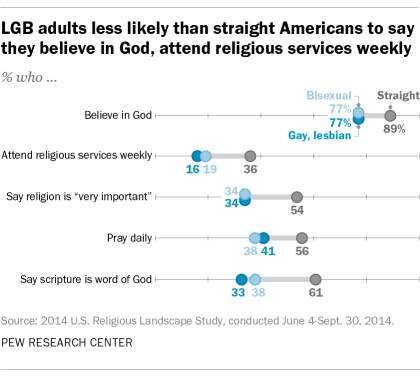 A similar dynamic is at work when it comes to religious service attendance, which is one of the most standard measures of religious participation. About two-in-ten bisexuals (19%) and 16% of lesbian and gay Americans say they attend religious services weekly. By comparison, 36% of straight adults attend a house of worship regularly.

LGB Americans – who make up 5% of respondents in the survey – also are much less likely to say that scripture is the word of God, with 38% of bisexuals and 33% of gays and lesbians saying this. By comparison, 61% of straight Americans see the Bible or other holy scripture as God’s word. Likewise, while about a third of gays, lesbians and bisexuals (34%) say that religion is very important in their lives, more than half of straight Americans say this (54%).

The religious gap between LGB and straight adults narrows somewhat on the question of belief in God or a higher power. About three-quarters of LGB adults (77%) say they believe in God, lower than the share of straight Americans who say this (89%).

LGB adults may be less religious than straight Americans by some measures, but the gaps between these groups generally narrow when it comes to questions about spirituality. 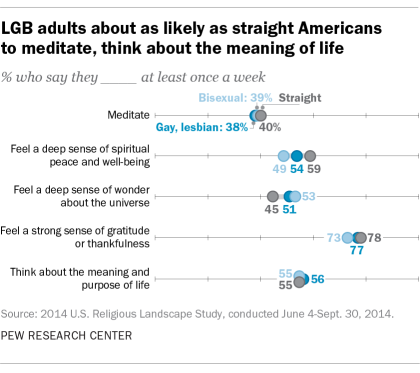 LGB Americans are more likely than straight adults to say they regularly feel a deep sense of wonder about the universe. Roughly half of gay and lesbian adults (51%) and bisexuals (53%) say this, compared with 45% of straight Americans.

At the same time, LGB adults are less likely than straight adults to say they feel a deep sense of spiritual peace and well-being at least once a week, and are somewhat less likely to say they regularly feel a strong sense of gratitude or thankfulness.

Lesbian, gay and bisexual Americans are more critical of churches than straight adults are
Lesbian, gay and bisexual Americans differ from general public in their religious affiliations
Bisexual adults are far less likely than gay men and lesbians to be ‘out’ to the people in their lives
5 key findings about LGBT Americans
Among LGBT Americans, bisexuals stand out when it comes to identity, acceptance