Unauthorized immigrants in the United States are better at speaking English and more educated than they were a decade ago, according to new Pew Research Center estimates based on government data. 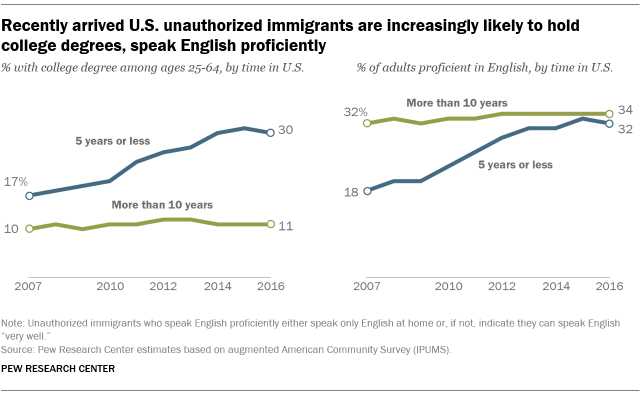 Despite these gains, unauthorized immigrants remain much less likely than lawful immigrants to be proficient in English (34% vs. 57% in 2016) or hold a college degree (17% vs. 37%).

Below is a closer look at rising levels of English proficiency and education among unauthorized immigrants in the U.S. – and demographic factors behind the changes.

Improvements in English proficiency and educational attainment since 2007 are due mainly to the changing profile of unauthorized immigrants who arrived in the U.S. within the previous five years. Among these newer arrivals, 32% were proficient in English in 2016, compared with 18% among the newer arrivals in 2007. Longer-term unauthorized immigrants – those who have been in the U.S. for more than a decade – also improved their English proficiency, but the change was less pronounced than among recent arrivals. 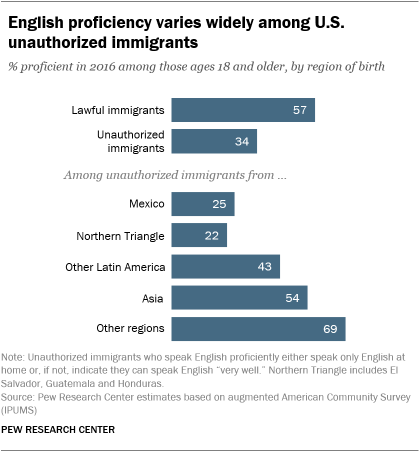 Among more recent arrivals, the rise in English proficiency and educational attainment is linked to the changing mix of origin countries, as well as to rising levels of schooling throughout the world. Compared with a decade ago, a markedly smaller share of recent arrivals come from Mexico, whose immigrants have lower English proficiency and education levels on average compared with other groups. A higher share than a decade ago comes from Asia, whose immigrants tend to have higher levels of both.

These changes in English proficiency and education are taking place as the overall number of  unauthorized immigrants in the U.S. has declined sharply, due to fewer new arrivals. Only 20% of all unauthorized immigrants had arrived within the previous five years in 2016, compared with 32% in 2007. A rising share likely arrived with legal visas and overstayed their deadlines to leave, and a smaller share crossed the border illegally.

Most research has found that immigrants’ English skills improve the more time they have lived in the U.S. Among unauthorized immigrants within each origin group – all Mexicans or Chinese who are unauthorized, for example – longer-term immigrants are more likely to be proficient in English.

Pew Research Center estimates of the size and characteristics of the unauthorized immigrant population are based on U.S. Census Bureau data. English proficiency estimates are derived from the Census Bureau’s American Community Survey, which includes a three-part question asking whether each person in the household speaks a language other than English at home and, if so, which one. For those who do not speak only English at home, the question asks how well each person speaks English – “very well, well, not well or not at all.” The total adults defined as proficient in English includes those who speak only English at home or who say they speak English “very well.”

Census Bureau research has found that the American Community Survey question about language “does a good job of measuring English ability” – that is, people’s self-reported ratings tend to match their scores on objective tests of English literacy.

Other research has found that immigrants with limited English-speaking ability are more likely to live in poverty, reflecting in part their job skills. A Migration Policy Institute analysis found that those with limited English tended to be more concentrated in traditionally high immigration states such as California, Texas, New York, Florida, Illinois and New Jersey. 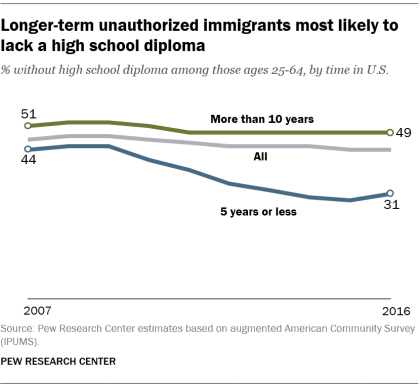 In this age group, the change was more dramatic among those who came to the U.S. within the previous five years: 31% lacked a high school diploma in 2016, compared with 44% in 2007. 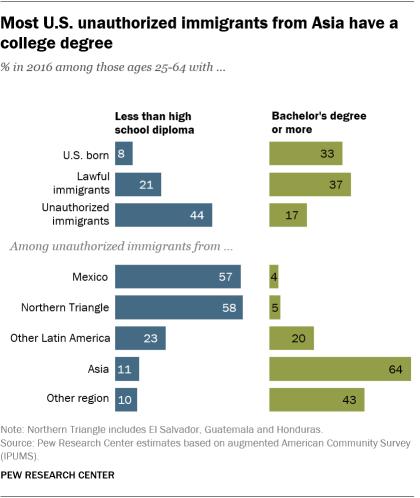 Among unauthorized immigrants from Asia, 64% in 2016 held college degrees, up from 53% in 2007. The share was higher among those in the U.S. for more than 10 years compared with those in the U.S. for five years or less (63% vs. 57%), possibly reflecting degrees acquired after moving to the U.S.