While ideas about religious liberty and tolerance are central to America’s founding and national story, different religious groups – including Catholics, Jews and Mormons – have suffered discrimination in the United States at various points in history. Today, Americans say some religious groups continue to be discriminated against and disadvantaged, according to an analysis of recent Pew Research Center surveys. 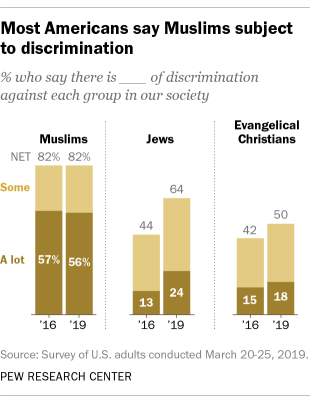 Among U.S. Muslims themselves, many say they have experienced specific instances of discrimination, including being treated with suspicion, singled out by airport security or called offensive names, according to a 2017 survey of Muslim Americans.

Half of Americans, meanwhile, say evangelical Christians suffer at least some discrimination. As with Jews, most people who think evangelicals are discriminated against say they suffer some inequity rather than a lot (32% vs. 18%). 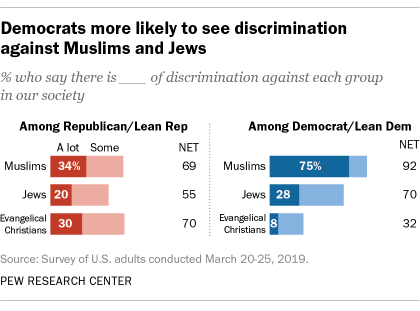 Another way to look at discrimination is to try to gauge its practical impact. When asked whether being part of a certain group hurts or helps someone’s “ability to get ahead in our country,” most Americans again see Muslims as being disadvantaged, according to a different Pew Research Center survey conducted in January and February of this year. Indeed, more than six-in-ten U.S. adults (63%) say that being Muslim hurts someone’s chances for advancement in American society at least a little, including 31% who say it hurts their chances a lot.