In his more than two years as president, Donald Trump has taken significant steps to support Israel, including moving the U.S. embassy from Tel Aviv to Jerusalem and recognizing the Jewish state’s sovereignty over the Golan Heights region. 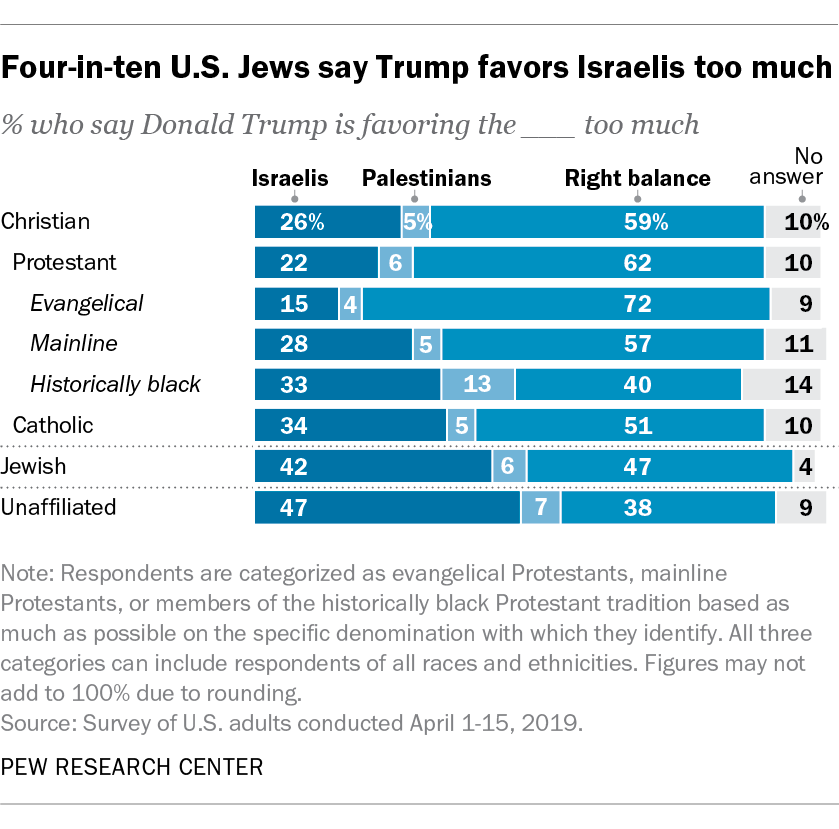 While U.S. Jews have a strong attachment to Israel, they are divided in their assessment of Trump’s handling of the Israeli-Palestinian issue, according to a new Pew Research Center survey. Roughly four-in-ten (42%) say they think Trump is favoring the Israelis too much, while a similar share (47%) say he is striking the right balance between the Israelis and Palestinians. The rest either say he is favoring the Palestinians too much (6%) or they don’t know (4%).

The difference between evangelicals and Jews on this question partly reflects partisan divisions. Most evangelical Protestants describe themselves as Republican or say they lean toward the Republican Party, while most Jews identify with or lean toward the Democratic Party. Overall, Republicans mostly think Trump has struck the right balance between the Israelis and Palestinians, while 53% of Democrats think Trump favors the Israelis too much.

Partisanship also may be a factor when it comes to the views of religiously unaffiliated Americans (sometimes referred to as “nones”), who, like Jews, largely lean Democratic. Nearly half (47%) of the unaffiliated – those who describe themselves as atheist, agnostic or “nothing in particular” when asked about their religion –  say they think Trump favors the Israelis too much. 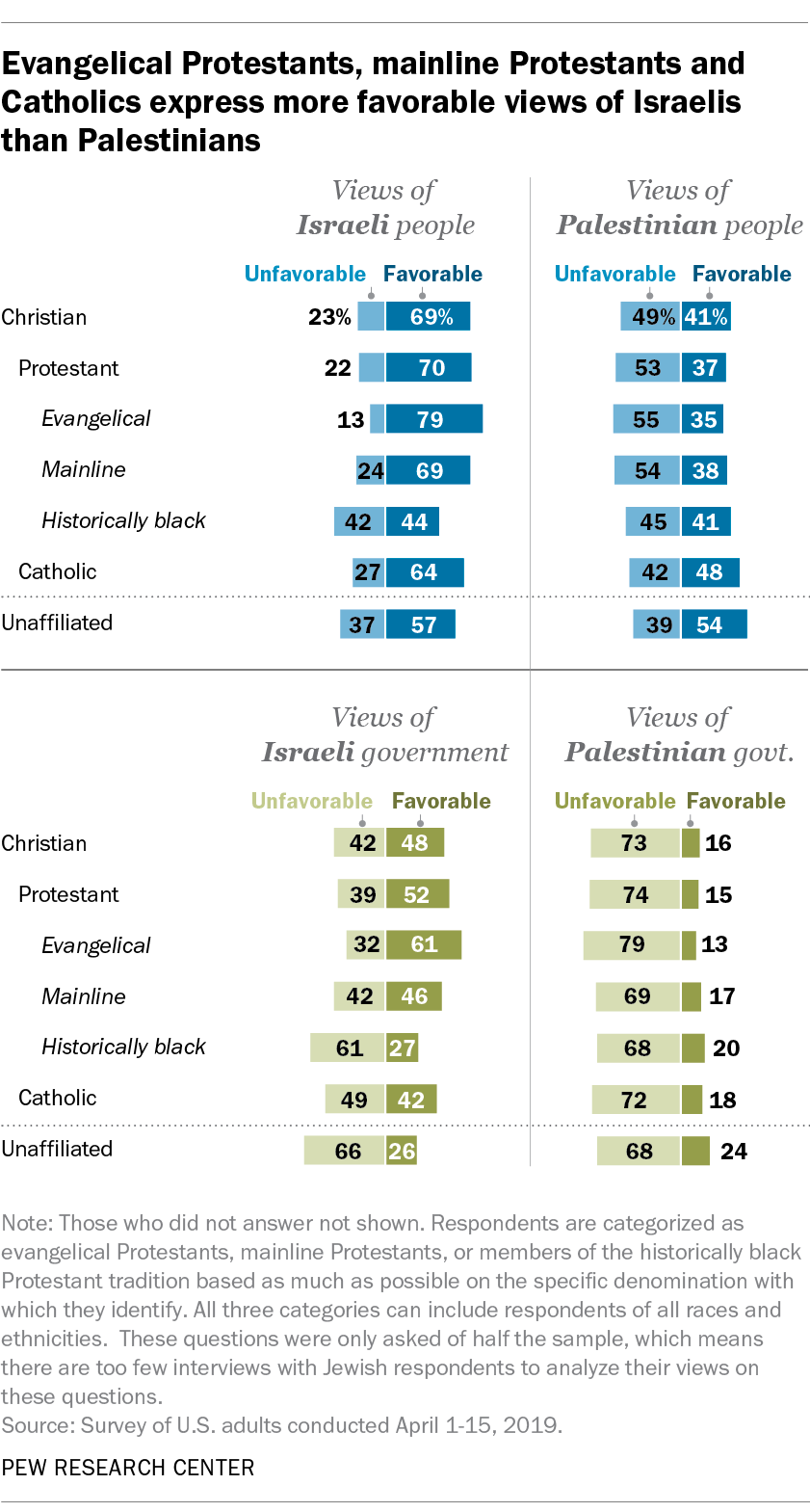 By contrast, religiously unaffiliated people and those in the historically black Protestant tradition are more ambivalent toward Israelis. Those in both of these groups feel about as warmly toward the Palestinian people as they do toward the Israeli people. (The survey did not include enough interviews with Jews to analyze their views on these questions, because the questions were only asked of half the sample.) 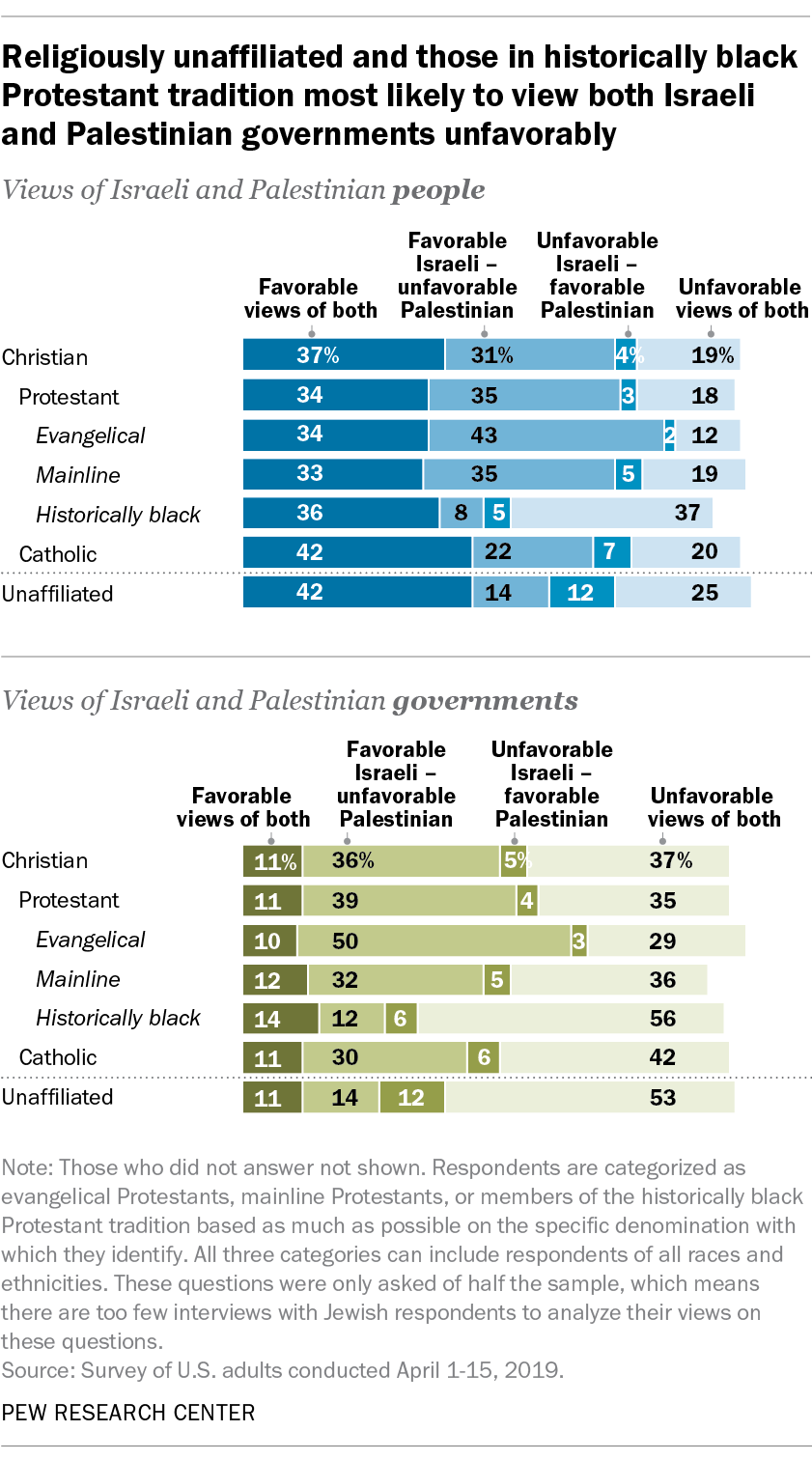 In fact, roughly half of “nones” (53%) and 56% of members of the historically black Protestant tradition have unfavorable views toward both the Israeli government, headed by the recently reelected Benjamin Netanyahu, and the Palestinian leadership, which is split between the Palestinian Authority in the West Bank and Hamas in Gaza.