Majorities in most surveyed countries say global climate change is a major threat to their nation. In fact, it’s seen as the top threat in 13 of 26 surveyed countries, more than any other issue the survey asked about.

People in Greece express very high levels of concern, with 90% labeling climate change a major threat (similar to the 88% there who cite the condition of the global economy). People in South Korea, France, Spain and Mexico also express strong concerns. Eight-in-ten or more in each of these countries say climate change is a major threat.

Americans are less likely to be concerned about climate change, with 59% seeing it as a serious threat. About as many people in the United States cite climate change as point to ISIS (62%) and North Korea’s nuclear program (58%). Americans most frequently cite cyberattacks as a major threat.

3Concerns about climate change have risen significantly in many countries since 2013. The share of people expressing concern about the threat of climate change around the world has grown since 2013, when Pew Research Center first asked respondents whether they see it as a major threat to their nation. In 2013, a median of 56% in 23 countries said climate change was a major threat; in the Center’s most recent Global Attitudes survey, a median of 67% in the same countries hold this view. And in 10 countries, the share of people who see global warming as a major threat has grown by at least 10 percentage points. For example, 83% of people in France say this, up from 54% in in 2013, an increase of 29 points. Mexico has seen a similar increase, from 52% to 80%, or 28 points. 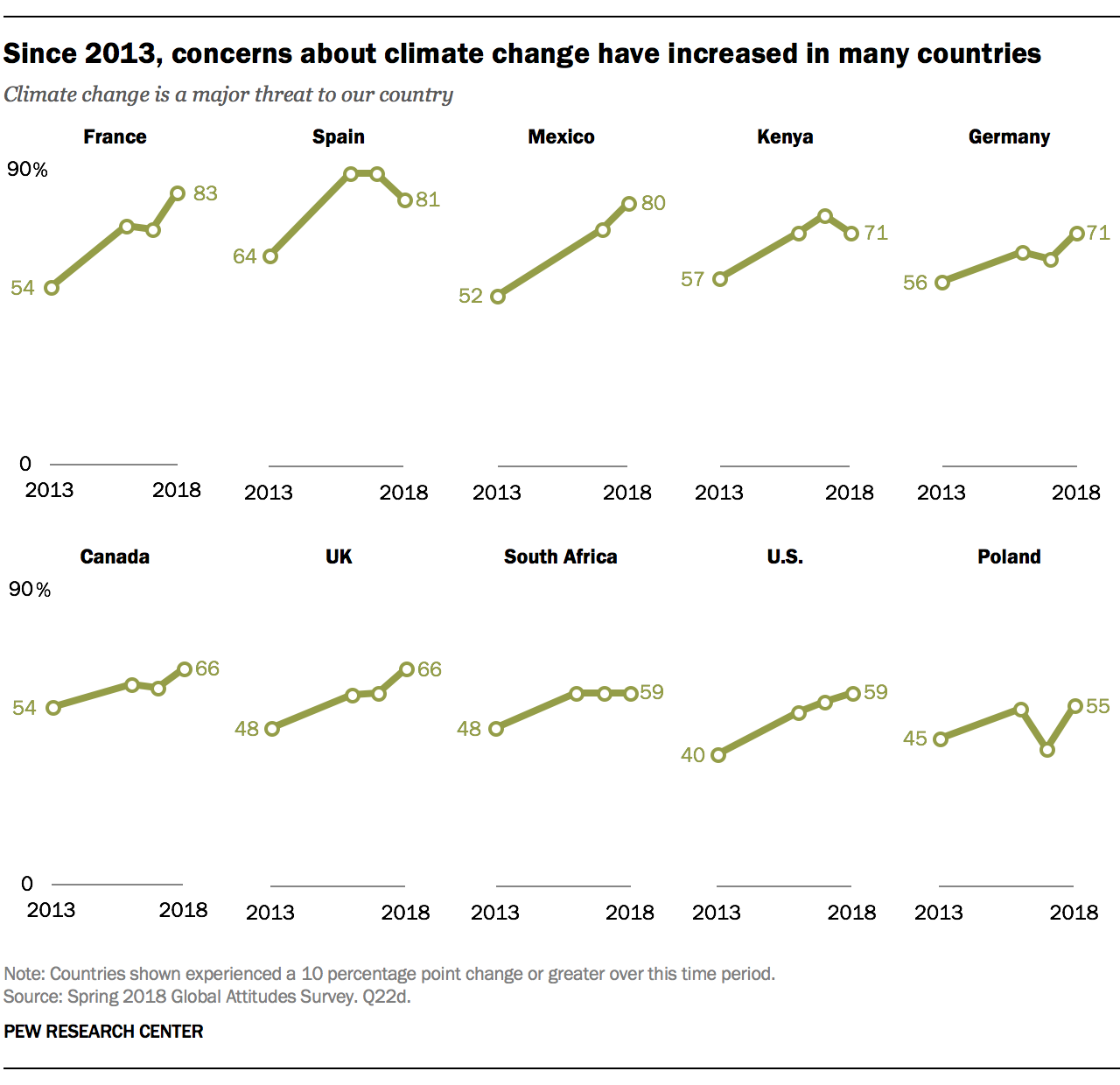 Americans have also grown more concerned about climate change, even if their overall level of concern is lower than in some other countries. Nearly six-in-ten Americans see climate change as a major threat (59%), up 19 points from 2013. 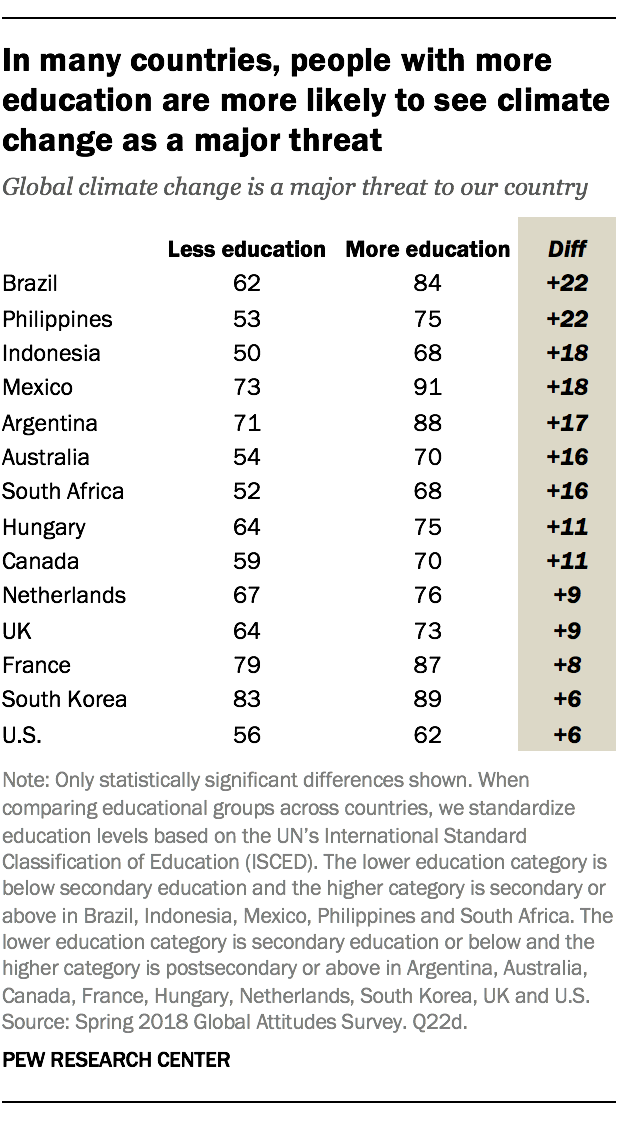 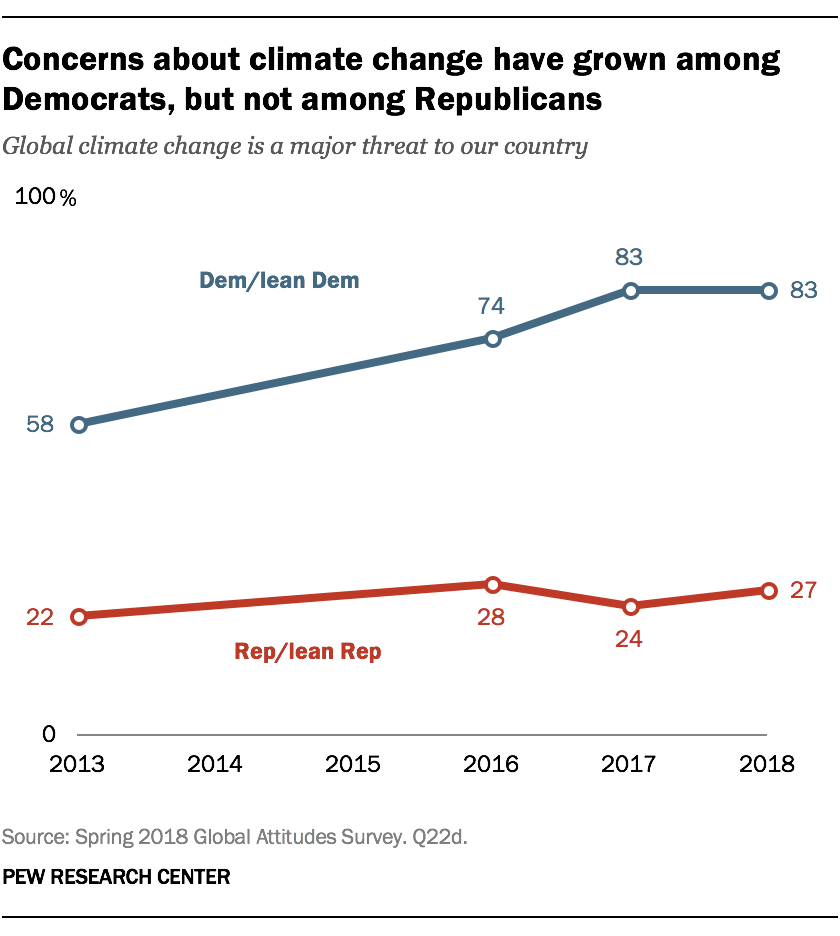 This trend is consistent with wide and growing political divides among Americans on a range of beliefs about climate issues.