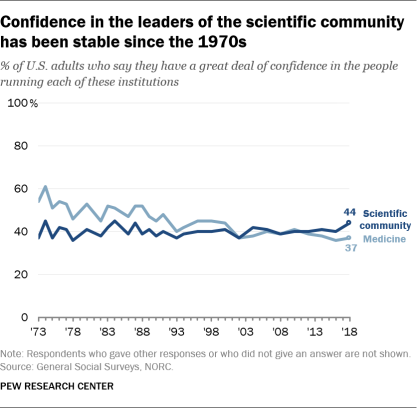 Recent surveys by Pew Research Center and other organizations have shown wide public divides over science-related issues such as climate change and food science. But public confidence in the scientific community as a whole has remained stable for decades, according to data collected by NORC, an independent research organization at the University of Chicago. 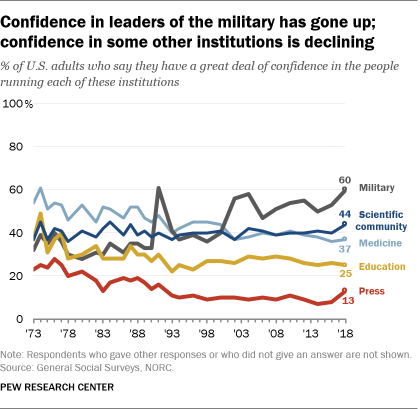 Public confidence in the scientific community stands out as among the most stable of about 13 institutions rated in the GSS since the mid-1970s. Confidence in medicine has been somewhat less stable, however. It declined in the early 1990s and has ticked downward again in more recent years, from 41% in 2010 to 36% in 2016 and 37% in NORC’s most recent survey.

A 2018 Pew Research Center survey found a similar pattern when asking respondents about their confidence in certain groups and institutions to act in the best interests of the public. 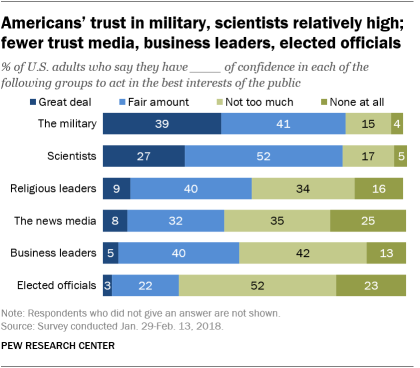 By contrast, majorities of Americans had not too much or no confidence in the news media, business leaders or elected officials to act in the public interest.

Note: This is an update of a post originally published April 6, 2017.

Topics
Business and LaborScience and InnovationTrust in Institutions
Share this link: