In the United States and many other countries, religiously active people are less likely to drink alcohol than those who are not as religious. That may not be a surprise: Holy texts from the Christian New Testament to the Quran and the Hindu Dharmashastras warn against the dangers of excessive drinking and other potentially harmful “vices.” Many religious leaders, including the late Rev. Billy Graham, have urged followers to abstain from alcohol.

Despite these teachings, the relationship between religion and alcohol consumption remains a nuanced one, and not all U.S. religious groups eschew alcohol to the same degree, according to a Pew Research Center survey conducted in 2015.

Half of U.S. adults (51%) who say they attend religious services at least once a month report drinking alcohol in the past 30 days, according to the survey. That compares with roughly six-in-ten (62%) among people who attend worship services less often or not at all. Similarly, only 13% of monthly attenders engaged in recent binge drinking – defined as four or more drinks on a single occasion for women and five or more for men – compared with 21% of less frequent attenders.

Christianity played a large role in the U.S. temperance movement. Yet alcohol remains a prominent part of the Christian religion, from the Gospel account of Jesus turning water into wine, to present-day European monks who support themselves by brewing beer, to the use of wine in some contemporary communion services. 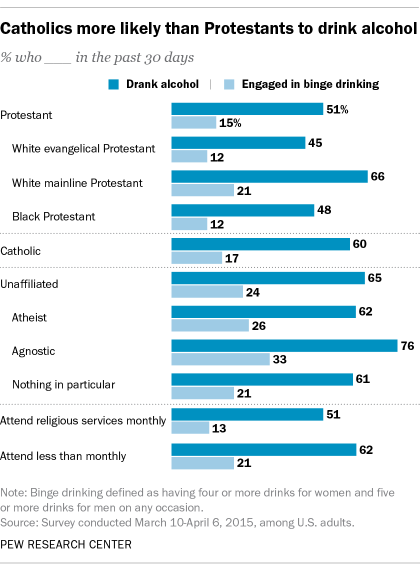 Perhaps reflecting this nuanced connection between religion and alcohol, different religious groups in the U.S. report different drinking habits. Religiously affiliated Americans also differ from adults who say they don’t have a religion, a category that includes agnostics, atheists and those who describe their religion as “nothing in particular.”

Among U.S. Christians, for example, Catholics are more likely than Protestants to say they’ve consumed alcohol in the past 30 days (60% vs. 51%). Adults who don’t belong to any religion, meanwhile, are more likely (24%) than both Catholics (17%) and Protestants (15%) to have engaged in binge drinking in the past month. (The survey did not include enough Mormon or Muslim respondents to analyze separately, but both of these religious groups teach their followers to abstain from alcohol.)

Among Americans without a religious affiliation, self-described agnostics are more likely than those who describe their religion as “nothing in particular” to say they consumed alcohol in the past 30 days (76% vs. 61%). A third of agnostics fall into the binge-drinking category, making them more likely to consume alcohol at that level than Catholics and all major Protestant groups, as well as those who are “nothing in particular.”

These patterns may be explained by the diversity of views that people from different religious traditions hold about the morality of alcohol. 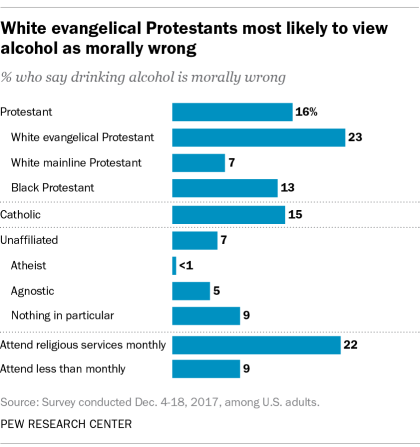 Catholics (15%) and Protestants (16%) are about twice as likely as religiously unaffiliated Americans (7%) to say drinking is morally wrong, according to a separate survey conducted by the Center in 2017.

There are differences in these views within different religious traditions, too. Among Protestants, white evangelicals are roughly three times as likely as white mainline Protestants to say that drinking alcohol is morally wrong (23% vs. 7%). Like white mainline Protestants, few white Catholics (5%) view drinking alcohol as morally wrong. However, the higher rate among Catholics overall who say alcohol is morally wrong may be due to the large number of Latinos in the U.S. Catholic Church, and the opposition to alcohol in many Central and South American cultures.

There are even differences among those without a religious affiliation: Roughly one-in-ten adults who describe their religion as “nothing in particular” say that drinking alcohol is morally wrong (9%), bigger than the shares of agnostics (5%) and atheists (<1%) who voice this opinion.

Of course, religious participation and affiliation aren’t the only factors that affect these views and behaviors. Demographics also make a big difference. For instance, college-educated Americans are more likely than those without a college degree to say they had a drink in the past month (69% vs. 51%), but they are no more likely to binge drink (17% for both groups). Men are more likely than women to say they had an alcoholic beverage in the past 30 days (60% vs. 52%), while people ages 65 and older almost never binge drink (4%).

In line with previous research, the youngest adults are the most likely to binge drink, with about three-in-ten respondents ages 18 to 29 (28%) saying they’ve consumed alcohol in that quantity in the past 30 days. (Younger adults are also more likely to identify as not having a religion – which may help explain the higher likelihood of drinking among the religiously unaffiliated.)