The last Congress was the first one in more than a decade in which Republicans controlled both the House and Senate while a president of their own party sat in the White House. And while the 115th Congress was more legislatively active than its recent predecessors, the proportion of substantive to ceremonial legislation was much the same, according to a Pew Research Center analysis of U.S. congressional data. 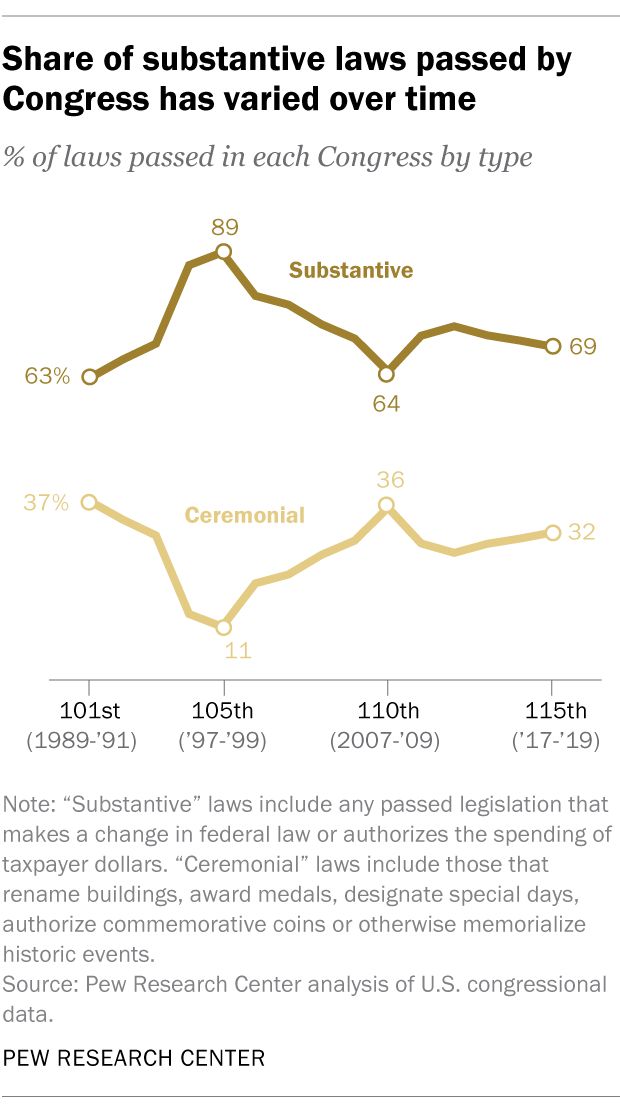 Between its inception in January 2017 and its final day on Jan. 3, the GOP-led 115th Congress enacted 442 public laws, the most since the 110th Congress (2007-09). Of those laws, 69% were substantive (as judged by our deliberately generous criteria) – not much different from the 71% substantive share achieved by the 114th Congress, in which the Republican-controlled House and Senate faced off against Democratic President Barack Obama. (The 114th Congress passed 329 laws in total.)

Nearly a third of the laws passed by the 115th Congress were ceremonial in nature; it was the third Congress in a row in which the ceremonial share increased. Those ceremonial measures include 109 that renamed post offices, courthouses and the like – a fourth of the Congress’ total legislative output.

In our regular assessments of Congress’ legislative productivity, we’ve cast a wide net regarding what makes a law “substantive.” Basically, anything that makes a change in federal law (however tiny) or authorizes the spending of taxpayer dollars (however few) makes the cut. Besides the measures referred to above on building-renamings, we count laws as “ceremonial” if they award medals, designate special days, authorize commemorative coins or otherwise memorialize historic events. (We exclude entirely “private laws,” which typically exempt a single person from a single provision of general law.) 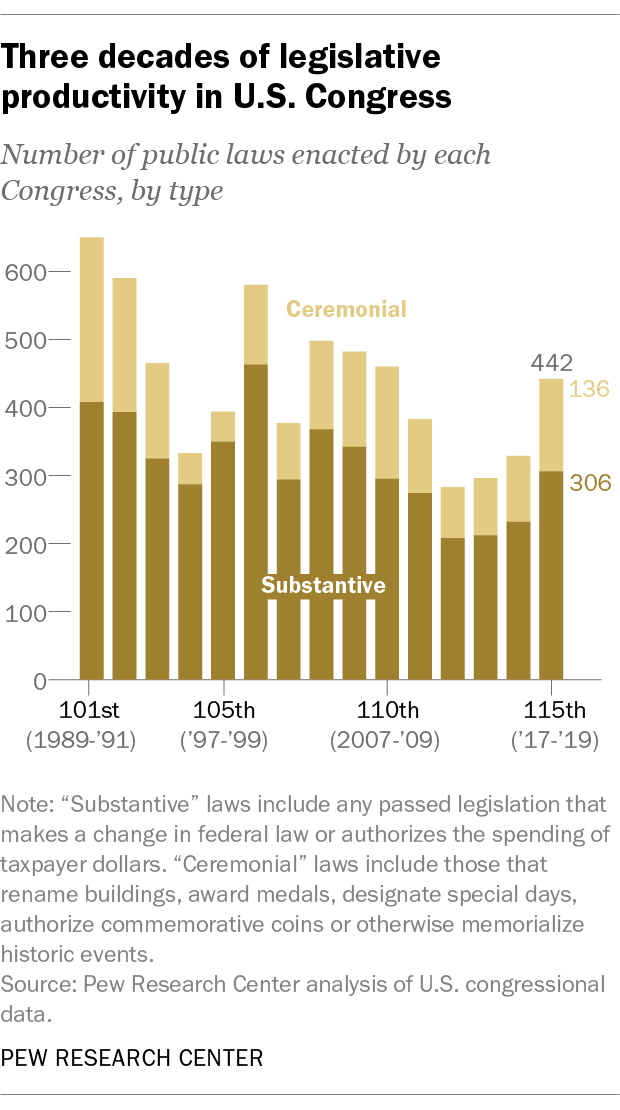 Looking back over the past 30 years, the 101st Congress (1989-1991) passed the most laws in total (650) and had the lowest percentage of substantive laws (63%). That’s because it, like many Congresses before, passed dozens of laws designating special observances – National Tap Dance Day, National Quarter Horse Week, National Library Card Sign-Up Month and the like. That practice diminished over the next few years and was largely ended by the 104th Congress in the mid-1990s.

Since then, only one Congress has chalked up a lower share of substantive legislation than the just-ended 115th. That was the 110th, held after Democrats retook the House and Senate in the 2006 midterms during Republican George W. Bush’s final two years as president. Only 64% of the laws enacted by that Congress were substantive, by our reckoning.

The 115th Congress, notably, ended without funding large chunks of the federal government for the current fiscal year (only five of the 12 regular appropriations bills were passed, in two separate omnibus packages). That, and the inability of Congress and President Donald Trump to agree on a temporary funding measure that either does or does not include money for his proposed border wall, led to an ongoing partial government shutdown.

But the 115th was not entirely without accomplishment, though the overall share of substantive measures might suggest otherwise. Perhaps its most significant law was the $1.5 trillion Tax Cuts and Jobs Act, passed in December 2017. Besides reducing income taxes on individuals and businesses, the law repealed the tax intended to enforce the 2010 Affordable Care Act’s mandate that most Americans carry health insurance.

Other major legislation, much of it passed with bipartisan support, included the First Step Act, an overhaul of the federal criminal justice system; a new five-year farm bill; a law intended to address the opioid crisis by, among other things, expanding the availability of addiction treatment; the Music Modernization Act, which rewrote music copyright and royalty rules for the digital age; a sanctions bill targeting Russia, Iran and North Korea; a bill overhauling and extending veterans’ educational benefits; and the first comprehensive NASA authorization bill in more than six years.