Politicians have long pursued the “Catholic vote” – a potentially big prize, given that the nation’s roughly 51 million Catholic adults constitute the largest single religious institution in the United States. But while Catholics once were more likely to vote Democratic, they have never been monolithic politically. Today, Catholics are evenly split between the two major parties and are sharply polarized, much like the broader U.S. public.

Roughly equal shares of Catholic registered voters have identified with or leaned toward the Democratic and Republican parties in recent years (47% vs. 46%, respectively). And according to exit polls, nearly identical shares of Catholics voted for Democrats (50%) and Republicans (49%) in 2018 elections for the U.S. House of Representatives. White Catholics are more likely to vote Republican, while Hispanic Catholics overwhelmingly back Democrats. (Most American Catholics are either white or Hispanic. Black and Asian Americans each make up roughly 3% of the U.S. Catholic population, according to the Pew Research Center’s 2014 Religious Landscape Study.) Collectively, however, Catholics essentially balance themselves out at the polls on the national level.

Meanwhile, when it comes to a number of specific issues – including some on which Catholic teachings leave little room for doubt – Catholic partisans often express opinions that are much more in line with the positions of their political parties than with the teachings of their church.

Take abortion (which the Catholic Church opposes), for instance: Among Catholic Republicans and GOP leaners, 55% say abortion should be illegal in all or most cases, identical to the share among all Republicans. At the same time, 64% of Catholic Democrats and Democratic leaners say abortion should be legal in all or most cases — slightly lower than the share for Democrats overall (76%). On balance, however, Catholic Democrats are more likely to favor legal abortion than to oppose it. 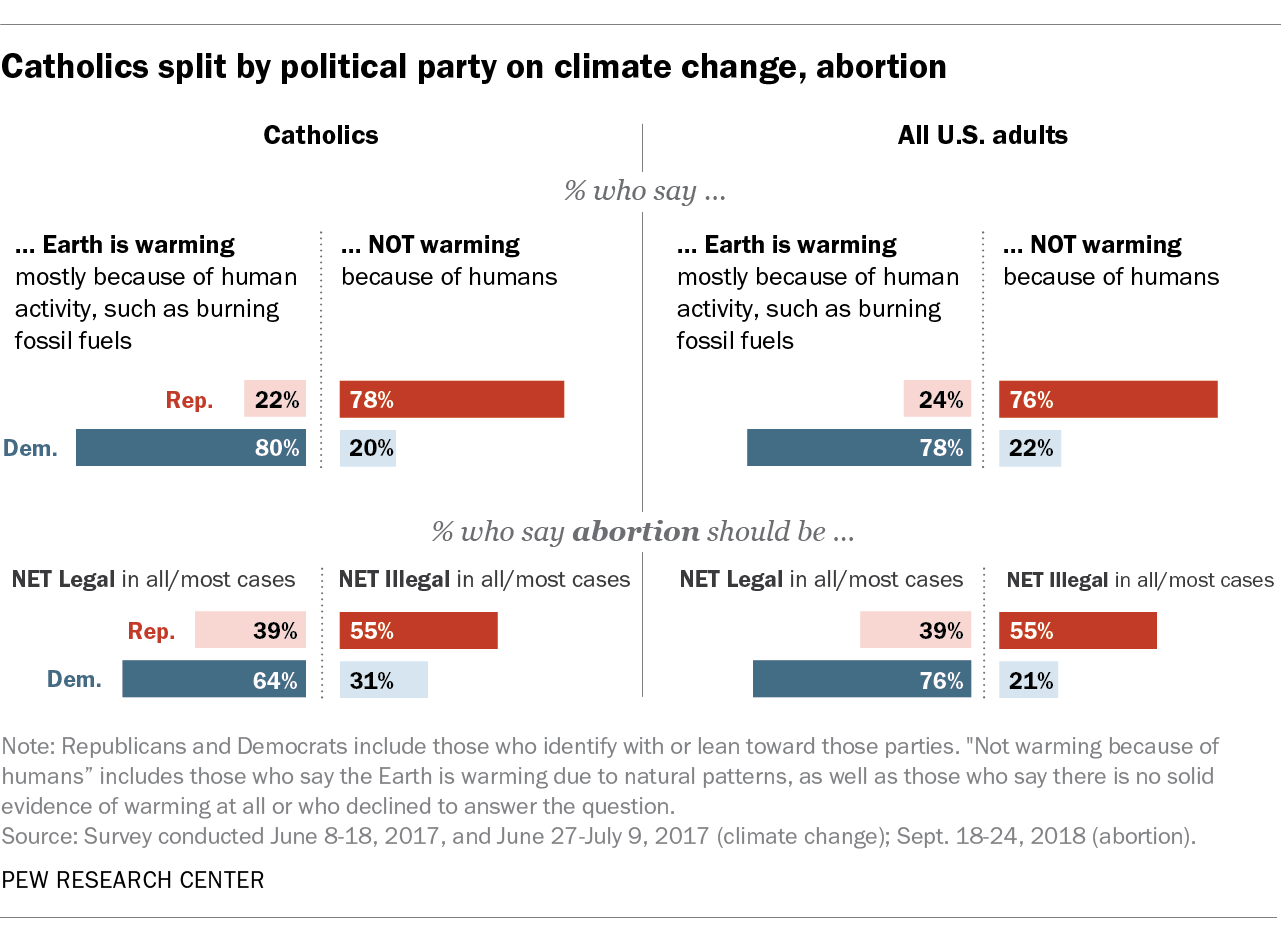 Partisan dynamics also are at work regarding views about climate change. Pope Francis has expressed a need to act on the issue, and like Pope Francis, eight-in-ten Catholic Democrats (along with 78% of Democrats overall) agree that the Earth is warming mostly because of human activity, such as burning fossil fuels. But just 22% of Catholic Republicans (and 24% of Republicans overall) say they believe the Earth is warming because of human activity. 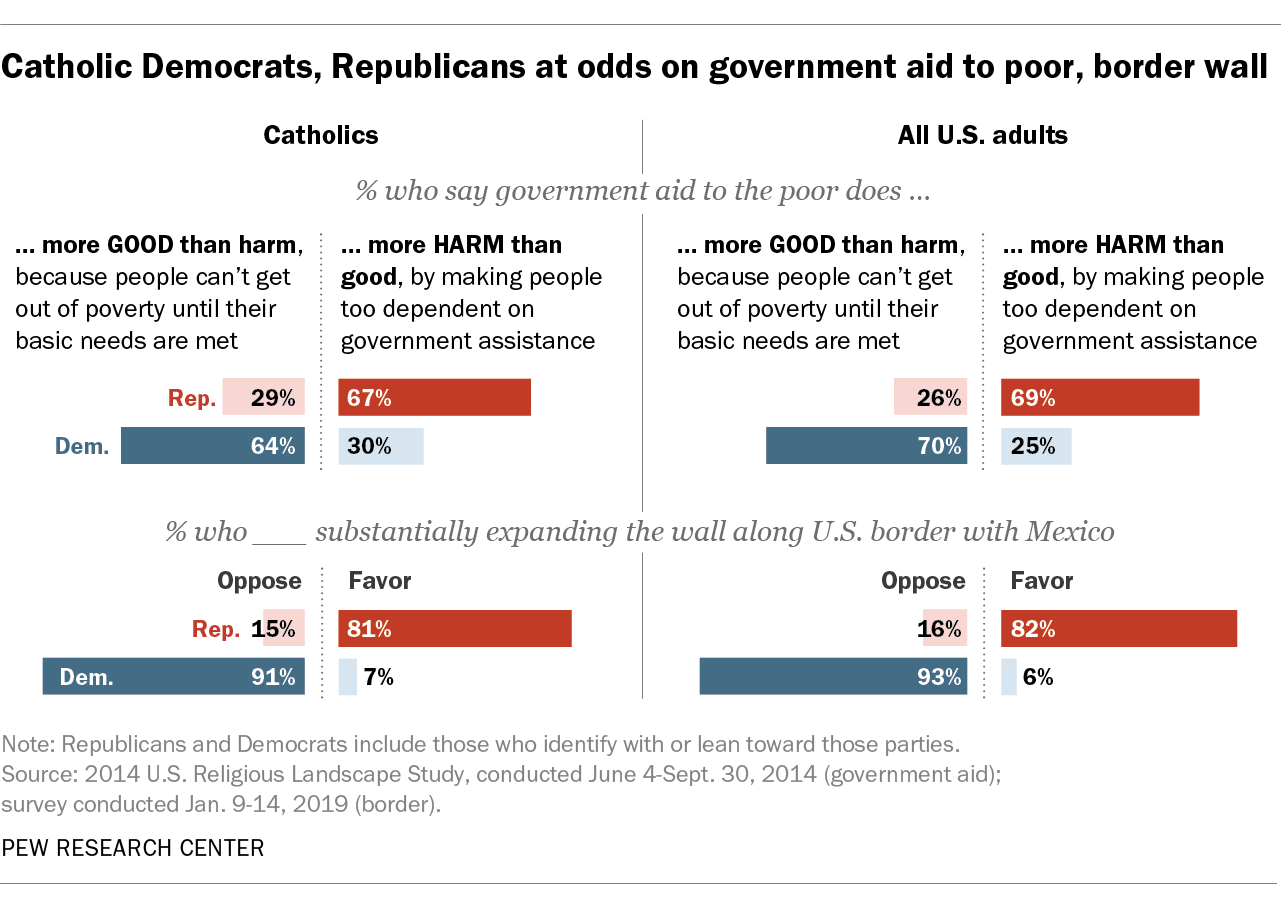 When it comes to immigration, Catholic Democrats also are much more likely than their Republican counterparts to say immigrants strengthen the country (86% vs. 47%), rather than being a burden. And nine-in-ten Catholic Democrats (91%) oppose substantially expanding the wall along the U.S. border with Mexico – while 81% of Catholic Republicans favor it, according to a survey conducted by the Center earlier this month.

There are also gaps between Democratic Catholics and Republican Catholics on questions about homosexuality and same-sex marriage, but majorities in both groups express opinions that are arguably in opposition to church teachings. For instance, six-in-ten Catholic Republicans (59%) and three-quarters of Catholic Democrats (76%) say they think same-sex couples should be allowed to marry legally, despite the church’s opposition to gay marriage. Similarly, most in both groups say they think homosexuality should be accepted by society (69% among Catholic Republicans, 84% among Catholic Democrats). 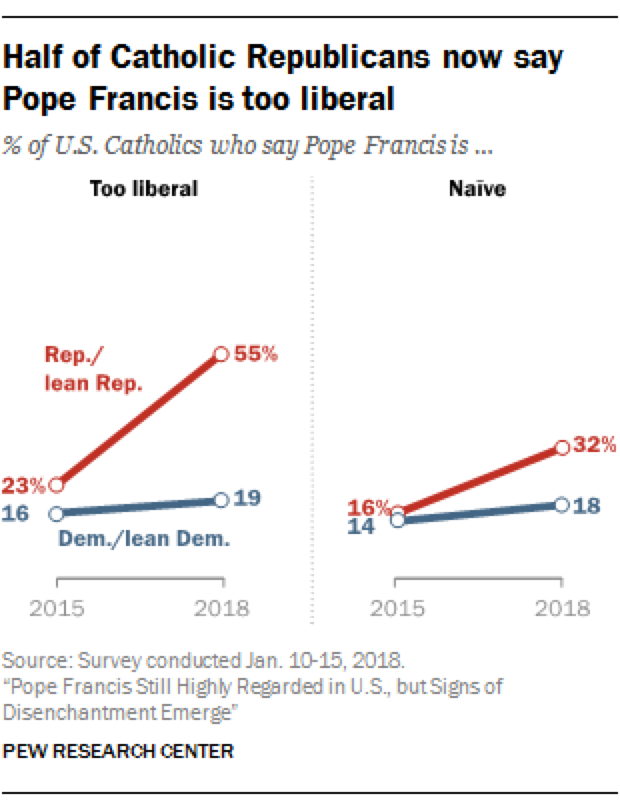 There was a time when Catholics in both parties were largely united in their admiration for Pope Francis. But in recent months, even these views have become more polarized along party lines, with Catholic Democrats and Democratic leaners viewing Francis more favorably than Catholic Republicans and GOP leaners. Among Catholics, Republicans are now much more likely than Democrats to say the pope is “too liberal” (55% vs. 19%) and “naïve” (32% vs. 18%). While most Catholic Democrats (67%) say Francis is doing an excellent or good job spreading the Catholic faith, just 45% Catholic Republicans say so. And as of early 2018, nearly twice as many Democrats (71%) as Republicans (37%) said Pope Francis represents a major change for the better.